Weird and Terrifying Images To Feel Uncomfortable About

They say that fear is the oldest feeling there is. They probably didn't have decaying puppets or underwater clowns in the dawn of man, but holy hell do they do the job. On second thought, maybe primordial clowns came from the sea just like us? Long, wet clowns with gills that honked. Maybe it's best not to think about it. From the world's cursed images to the necessary but ominous signs we use to warn each other of real danger, there's some spooky crap out there, man. 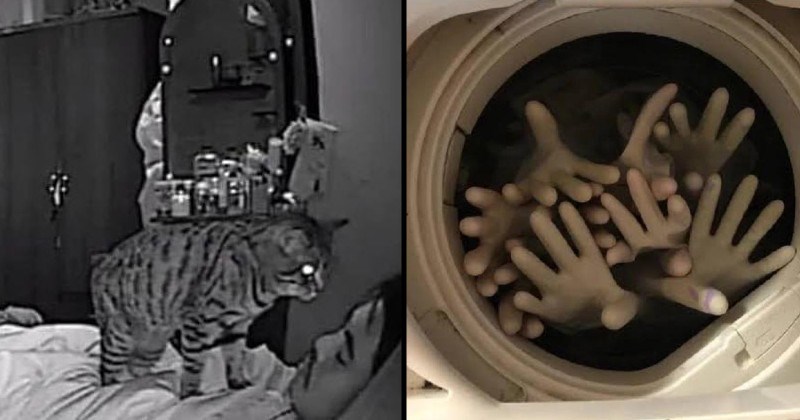 It doesn't really matter what your personal beliefs about birthdays are, you don't exactly get to dictate other people's values after taking their stuff. Also, it's pretty safe to assume that eating a piece out of a kid's birthday cake before the candles go on isn't going to be taken as a minor inconvenience. Cake drama is real, like this entitled coworker who demanded a cake and issued threats, or this one pound cake Karen who was furious after getting what she wanted. 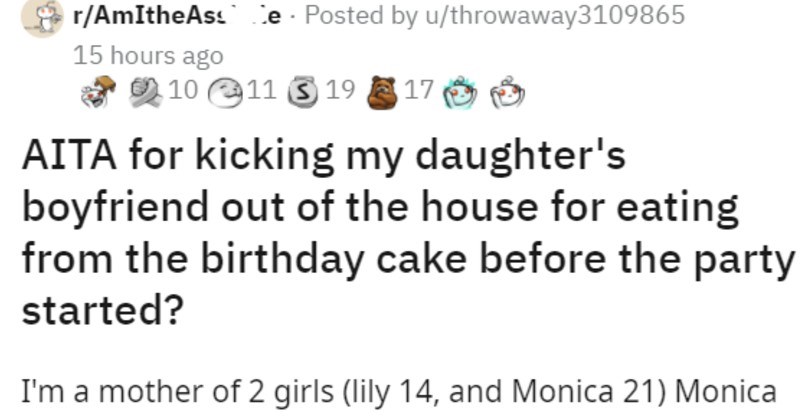 Meals People Made With Hatred, Not Love

It's a totally ubiquitous thing to say. "Why is this lasagna so good? Well of course, it's made with love." Well sometimes food is not made with love. Sometimes cursed food abominations make it obvious that there was something else in there. It stands to reason that if love can exist as an ingredient, hatred must exist as well. Sometimes it's a combination of apathy and incompetence in the case of horrible things people ate out of politeness, but other times, all it takes is a tablespoon of hatred. 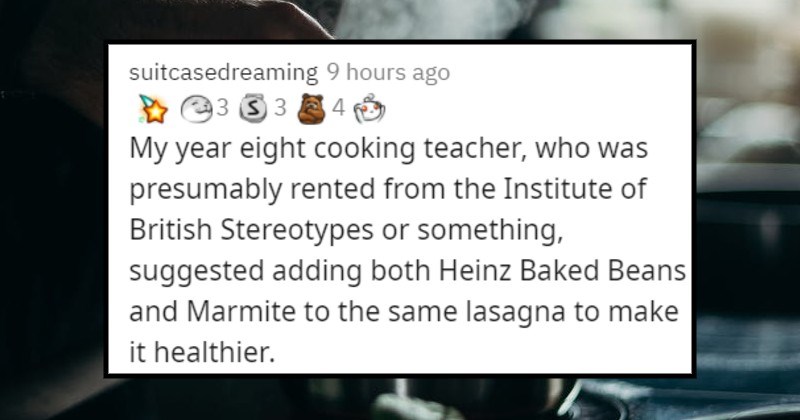 It's really easy to think that people are smart and responsible in general. But the more people you meet, the more you realize that we're barely holding it together. Life is just brimming with facepalms deep fried in stupidity. It's an absolute miracle that most of us can manage to hold down a job, feed ourselves, and not just sit around all day hitting ourselves with hammers. So go on and expose yourself to the gamma rays of facepalming, mystifying dumbness. 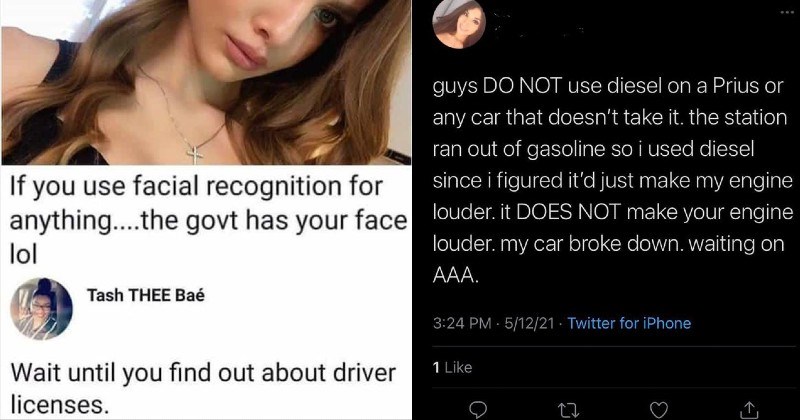 "Not My Job" Moments of Occupational Ineptitude

As human beings, it's our duty to complete our jobs with the absolute minimum in mind. To some degree, we all pride ourselves on looking like we've done our jobs without making our general apathy and unprofessionalism too obvious. That said, we're not perfect and it can show in the form of "not my job" moments of dubious professionalism. But also, it's not like an upside-down stop sign is impossible to read. 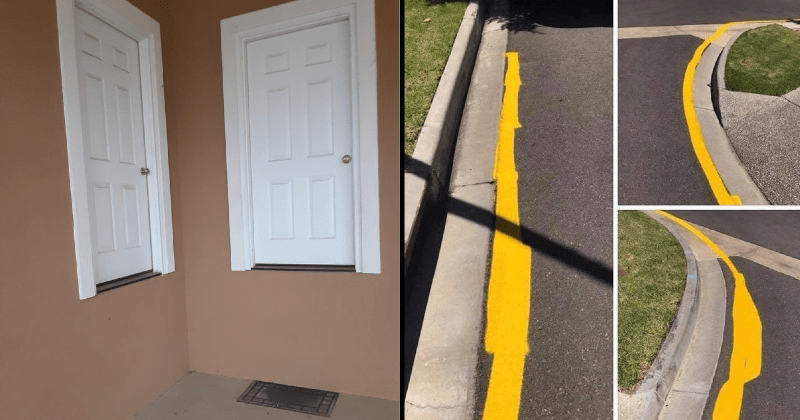 Anyone who's ever ridden on a plane, seen a plane, or even heard about them is probably under the impression that they need a runway or at least some length of space to take off or land. With a strong enough headwind to slow the thing down, that's not always the case. Observe.

Food allergies are nothing to be taken lightly, but at the same time, being allergic to something doesn't mean that the laws of reality can change. It's kinda like the time this person learned that mayo isn't vegan. It seems like this person did their best to provide a delicious alternative, but sometimes it's just impossible to win. Maybe this guy is just trying to cover for himself after wrongfully promising nut free baklava? For another ridiculous food story here's the uncle who demanded a meat meal at a vegan wedding. 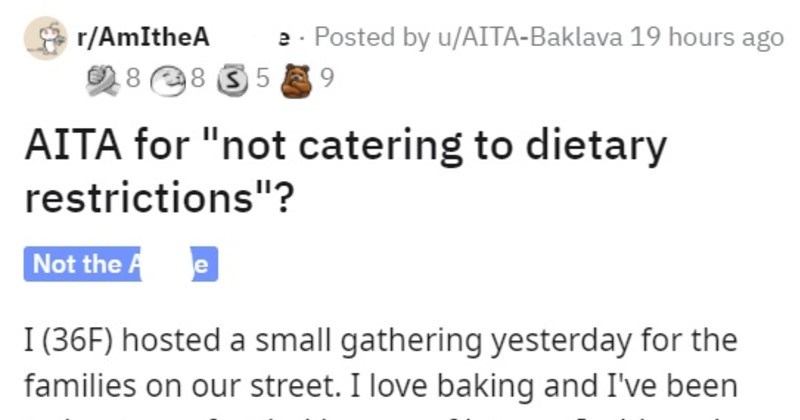 Every workplace is subject to whispered rumblings about dishonest or prohibitively weird coworkers. Some of these things go unfounded, but more often than not someone is stealing from the till, throwing tantrums in front of customers or just being incalculably anti-social. Some of these horrible coworkers people just have to endure. Some coworkers are so absurdly bad they get fired on the first day. 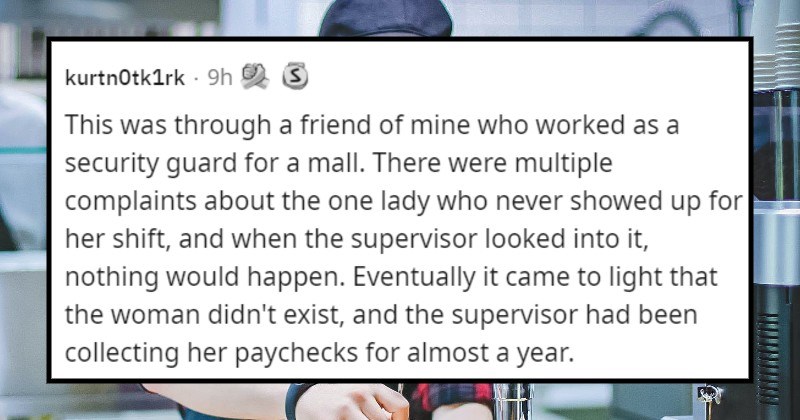 Working retail comes with a very special set of gripes unlike any other job. The entitled customers, utter Karens and bored scamming shoppers leave retail employees with a hollow dissatisfaction that makes one wonder if there are any sane people left on the planet. Secret or mystery shoppers are one of those interesting speed bumps that you wouldn't think would be infiltrated by the forces of Karenhood, but lo and behold, here we are. 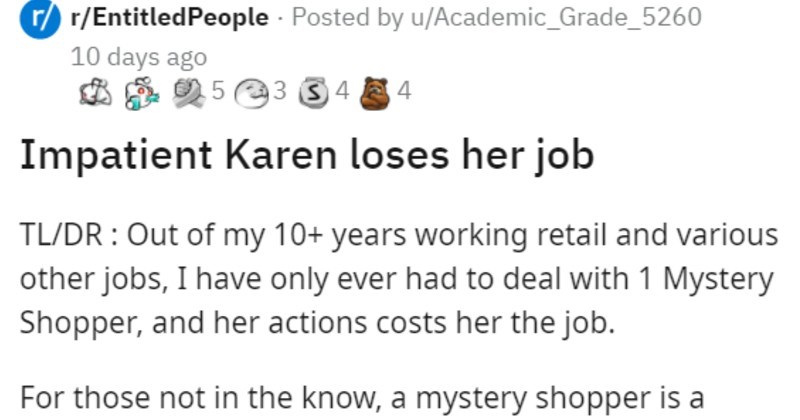 Being upset and miserable isn't always a choice, but sometimes we have the option to seek it out in the form of annoying and off-center imperfections. Maybe this kind of thing doesn't bother you. But it probably does. As people with free will, we have the freedom to sit there and gripe at images of sloppy imperfection or stare in delight at delectable images of satisfying perfection. The choice is ours. 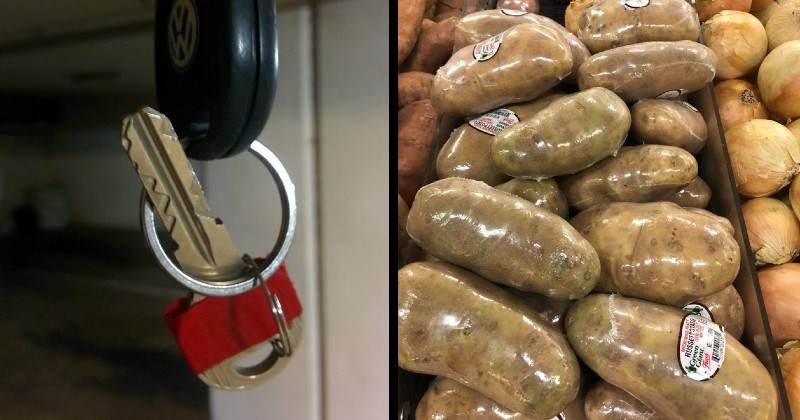 The fun thing about entitled people is that they never really seem to understand why everyone takes issue with their "suggestions." From this entitled mom who tried to swindle a babysitter to the many Karens of the world, what feels like it should be a learning experience never becomes one. The abusive landlords, demanding neighbors, insane bosses and random craigslist buyers out there just keep doing their thing, unfazed by the mountains of regular people telling them they're being ridiculous. 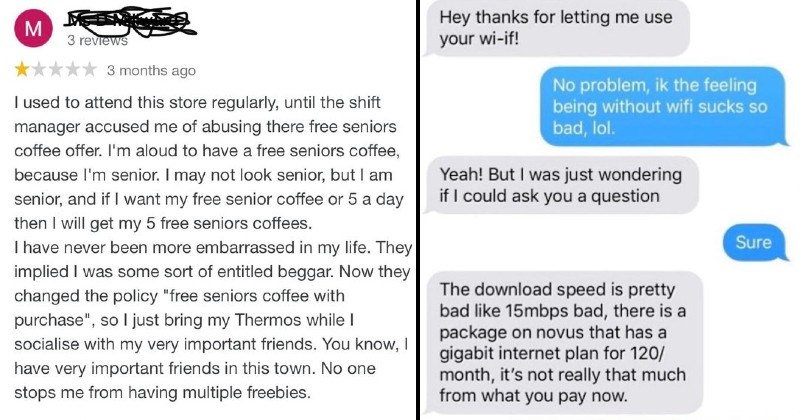 It's for sure a bad day for this lady, but sometimes we have to look inwardly at our own role in the twists and turns in our lives, and some people are completely unwilling to do that. As a result, we have people like this bride who thinks her bridesmaid's chemotherapy will ruin her wedding or these brides with their unreasonable demands. Maybe this will be a learning moment? Spoiler: It won't. 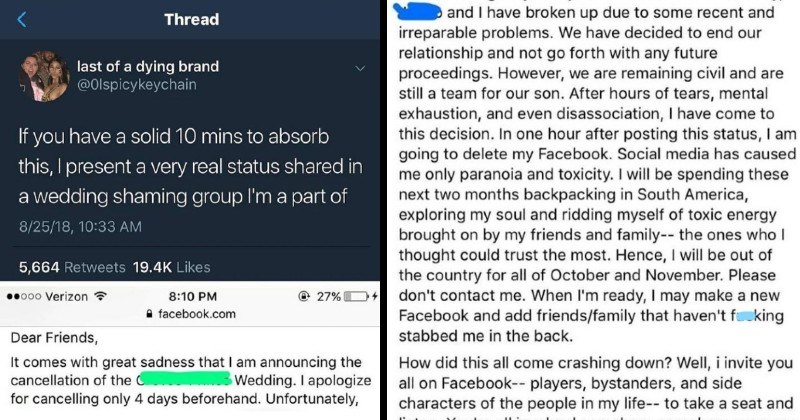 Intriguingly Rare Populations People Are In The 1% Of

The world is big and there's a lot going on, so almost paradoxically,  a whole lot of rare and unlikely things happen. Not just that, many of us have some extremely rare quality or achievement that no one would have thought about before we mentioned it. (Side note, boy howdy do people have some unconventional diseases.) We're all subject to weird goings-on, so naturally we also have stories of strange events we can't explain logically. 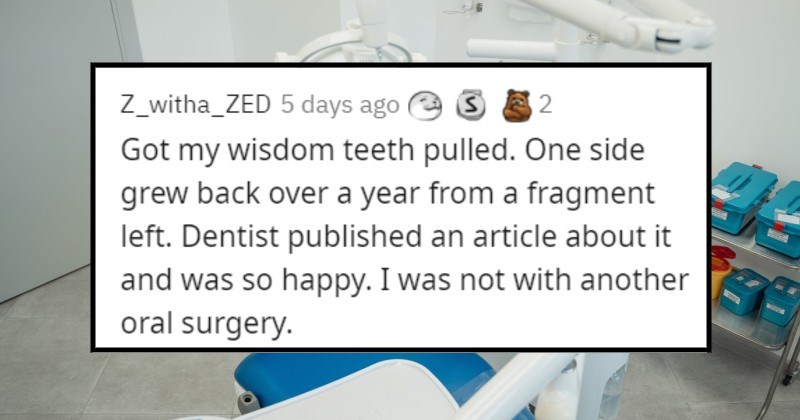 This Greenpeace activist was attempting to drop a big yellow balloon into the field to raise awareness of the climate crisis during a France vs Germany match when he hit a camera cable high above the pitch, forcing a tight recovery and crash landing on the field. Greenpeace has since apologized to the two audience members injured in the stunt, and Bavaria's interior minister said that the guy was lucky marksmen noticed the Greenpeace banner and didn't shoot him. With all that said, if the goal was to raise awareness, the guy's screw-up probably got more eyes on him than if the plan had succeeded.

Sometimes people don't seem to understand that driving is a cooperative event. That means risky maneuvers like strapping a literal ton of garbage to the roof of your car or dangling a dryer out the back while pushing 70 down the freeway isn't exactly the best way to inspire confidence in the drivers around you. We get to see enough unsafe maneuvers at work, it just so happens people are compelled to do dumb crap on their commute too. 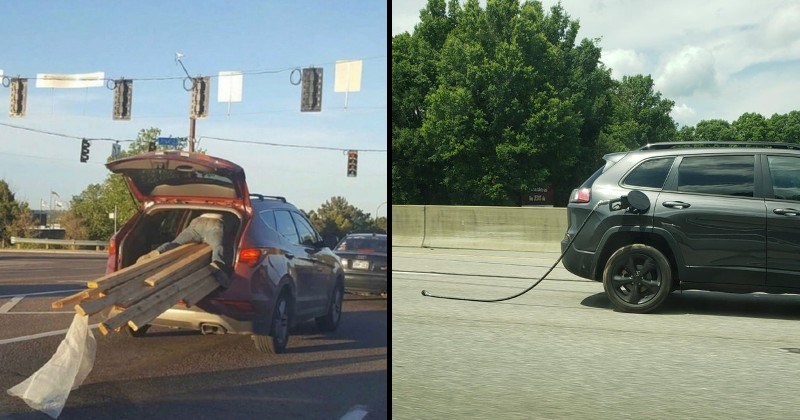 There's nothing quite like a fresh batch of glitch in the matrix moments to send you off on a disorienting reality trip where you might be left with your head in your hands, shakily wondering whether or not this is some grand simulation. Well, simulation or not we've still got to play the game. If it were a simulation, it's kind of "nice" to know that whoever/whatever is running said simulation is also prone to fails just like the rest of us measly human beings. 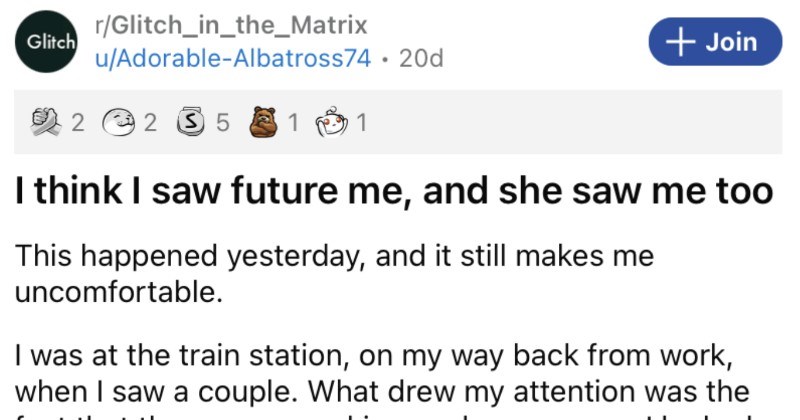