When you get a few people together who see each other every day, you get some interesting gossip. Some people like small town living and some people hate it, often for the same reasons. For some more drama, here's people's school's big scandals. 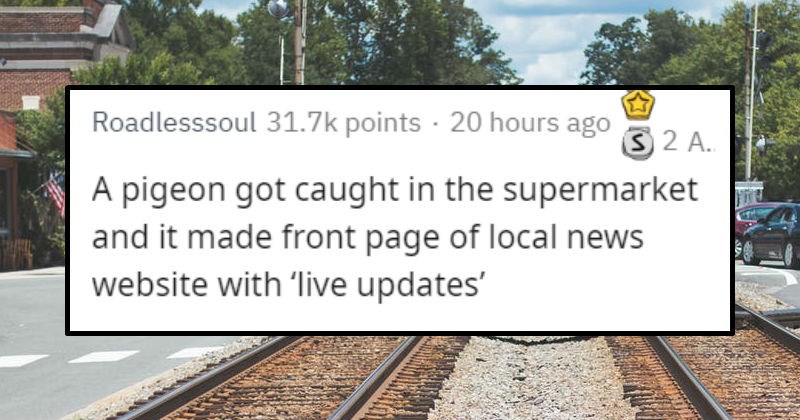 This dad asked the people of Reddit whether or not he was in the wrong for cutting his mother-in-law out of Christmas, after he hit his breaking point with her. It sounds like she's a toxic drama-stirring, upstaging mess. Might be best for the kids to not have that kind of person around, come the holidays? Or is he overstepping? 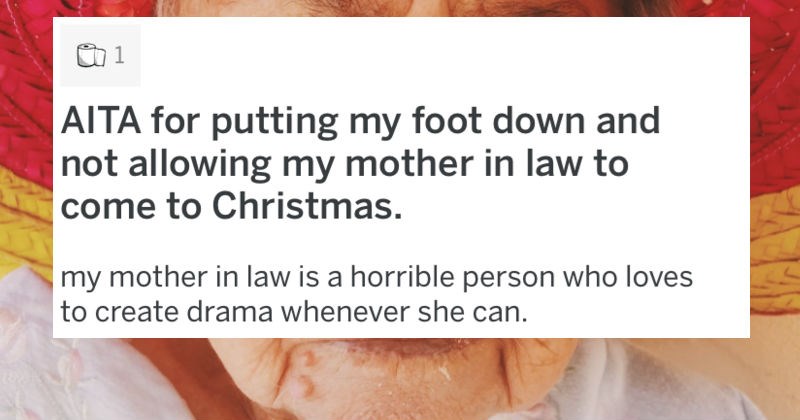 When this woman decided that she wasn't up for her holding her co-worker's baby, and made that known, she proceeded to get shunned by a very critical rest of the office. Was she in the wrong for not wanting to hold the beautiful baby, or was it really just a simple scenario of her exercising her free will? I mean, come on. 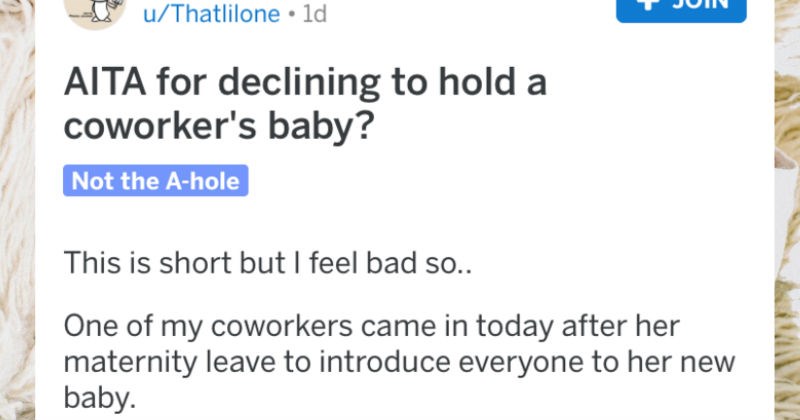 This bride asked the people of Reddit whether or not she was in the wrong for following through on a sunrise wedding, after her family and friends had expressed their strong disapproval. At the very least she should be ready for some no shows! 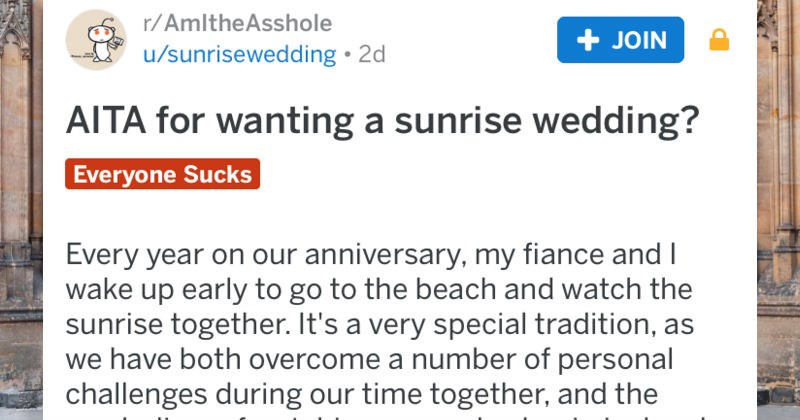 This guy went on a game show, which decided to put its contestants through the rounder when it came to confronting their biggest fears. As it turns out, he wasn't completely honest about his biggest fear. He said it was something to do with creepy crawlers, and ended up walking through a room filled with cockroaches.

Alright, that sounds pretty terrifying to me. Regardless, it wasn't his biggest fear. He ends up winning the game show, and with that victory, a car. Sounds like his family was a little split on whether or not that was a genuine victory, or if he's a jerk for lying about his biggest fear. I'm thinking the dude walked through a room of cockroaches and absolutely deserves a car. 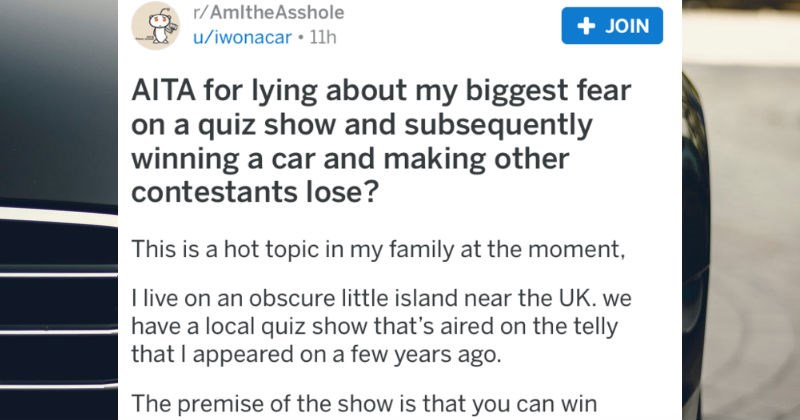 Guy's Wife Cheats On Him With Her Professor, He Tricks Her Into Thinking She Has Herpes And She Outs Herself

This guy discovered his wife had cheated so he proceeded to employ some tactical maneuvering, got access to her phone, switched some numbers around, and additionally contaminate their "weed lube" with poison ivy; and then boom, cheating wife thinks she's picked up herpes from her secret lover. A true nuclear revenge in its finest form. The fact that she outs herself in front of a ton of faculty and students with an "ugly cry" is the icing on the cake. 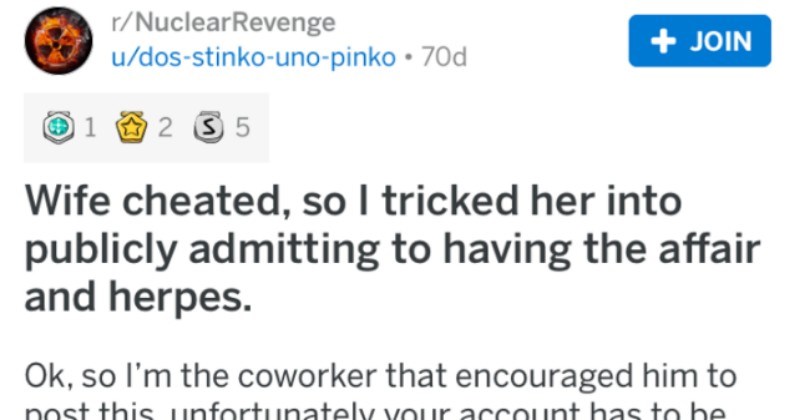 Crazy Possessive Bridezilla Photoshops Friend Out Of All Wedding Photos

Here's a saga spanning years, ending in a wonderfully, expensively petty decision. Like she says, this lady does sound like LOTS. We've seen epic bridezilla moments from wedding shop workers but this one is literally years in the making. 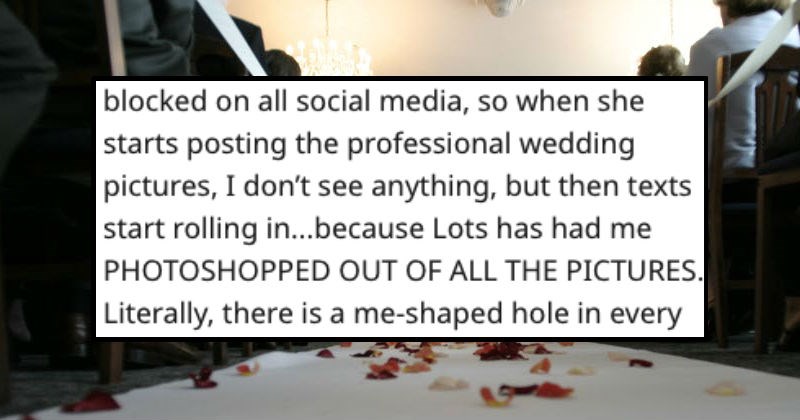 Did she really expect this to work? A stranger trying to make an unsavory trade for a 400 dollar Grand Prix? Aside from the legality aspect, it doesn't seem like accepting 150 dollars worth of sex from a complete stranger seems like a very smart idea. Money can motivate people to do strange things, and people have a hard time getting what they want without being rude, like this abusive customer who got slammed for demanding to speak to an owner on bereavement leave.

This groom asked the people of Reddit if he was in the wrong for cutting off his musician friend who couldn't attend his wedding, because of work. From what the responses are saying, people seem to be in agreement that this guy is in fact an asshole for the move. 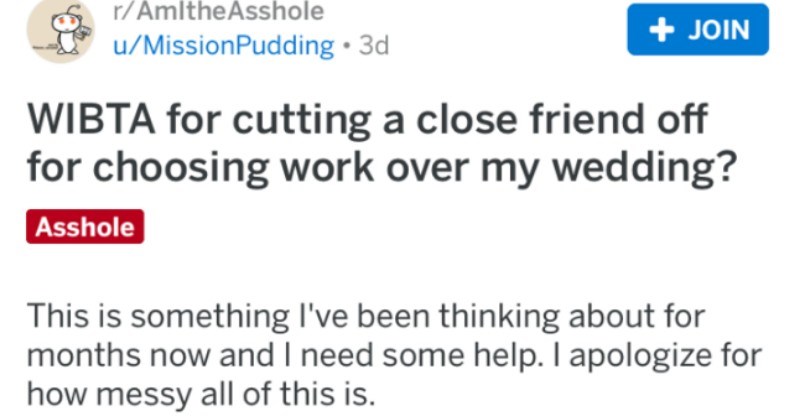 This woman's boss accidentally sent her a dirty text about her "boobs being out" and she decided to hire an attorney. He's currently freaking out. 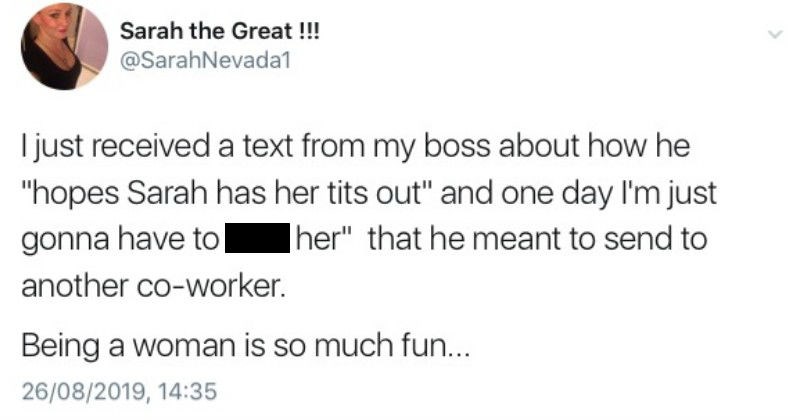 Wedding season is marked by an ongoing display of bridezillas stirring up all kinds of chaos at otherwise peaceful weddings. In this particular scenario, the self-important bridezilla decides it's an appropriate time to announce her engagement at her cousin's wedding. This is where the revenge takes its roots. The cousin takes her revenge later on by announcing her pregnancy at the wedding. 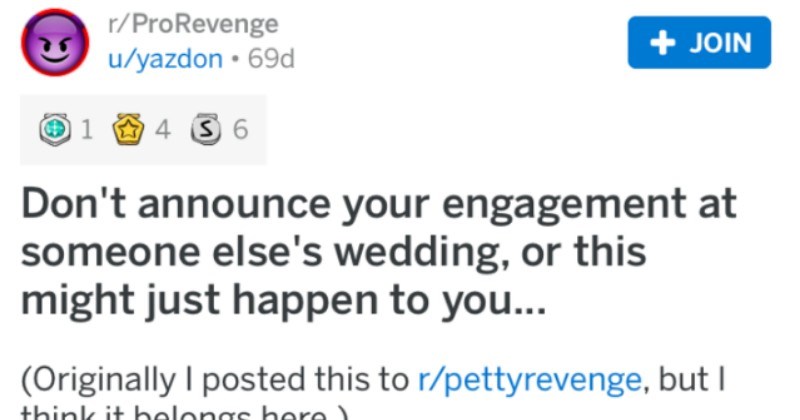 Someone on AskReddit asked people to share the things they don't talk about in their family. The resulting stories are pretty grim. We recommend buckling up and bracing yourself. 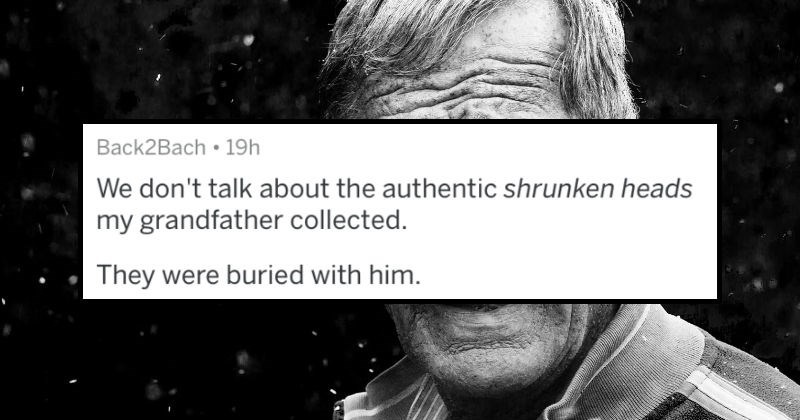 Wedding season's in full bloom and bridezillas are getting wild. Wedding dramas are breaking out left and right. The internet almost can't keep up with all of the melodrama. In this particular situation of a bridezilla doing her worst, we see a series of text exchanges between said bridezilla and her cousin end in some straight up ignorant fat shaming. 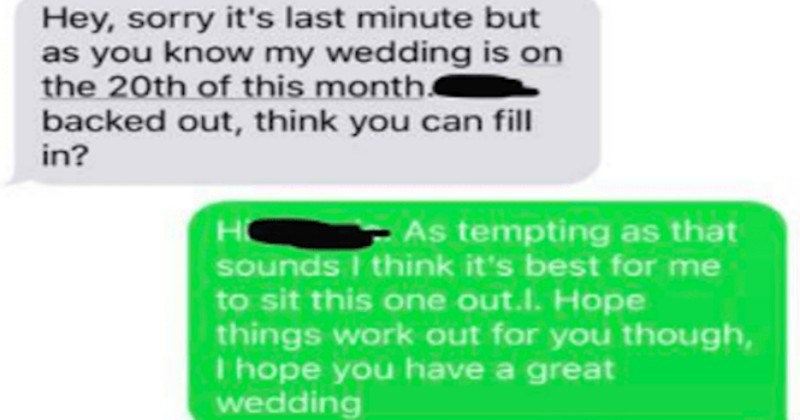 We get a kick out of people being petty like this guy who uses his imperfect lawn to drive his mean neighbor insane, but we've never seen someone cause family drama with the act of pitching a red onion as far as they could. To be fair to him, they already had some cut onions, but to be fair to her, it is just an onion. 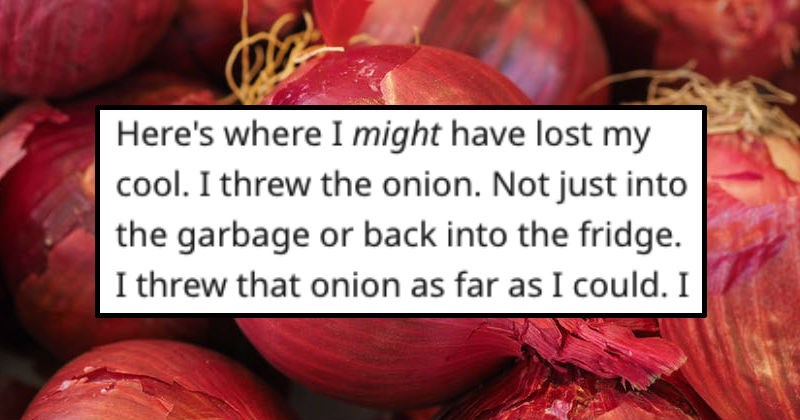 Guy Asks If He Should Press Charges for Step Daughter Putting Him $60,000 in Debt

Holy crap, how do you even get in a situation like this? We've seen people want to disown their sister, but this is an even bigger piece of family drama. And what are you gonna do? Send your step-daughter to prison? Is that even the right thing to do? Defrauding your parents into debt is a terrible move, but how many lives do you wanna ruin here? All in all, this isn't a fun situation to be in. 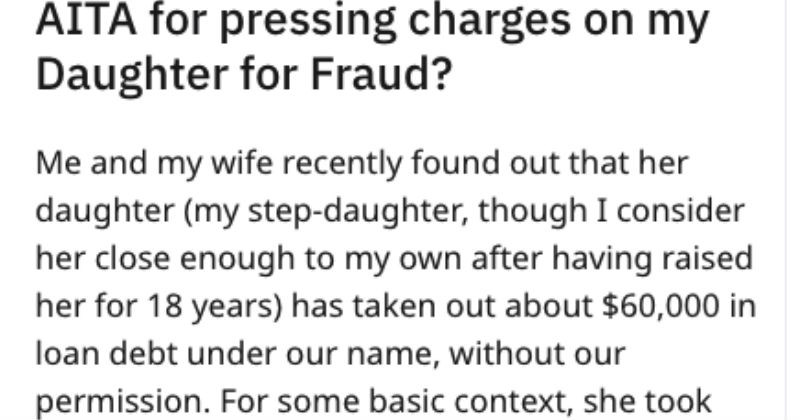 Wedding season's in full bloom, and it seems like we're regularly reading stories about people being their absolute worst selves. There's just something about the highly emotional event that inspires people to cave for breakdowns, BS behavior, and outright inexcusable rudeness. 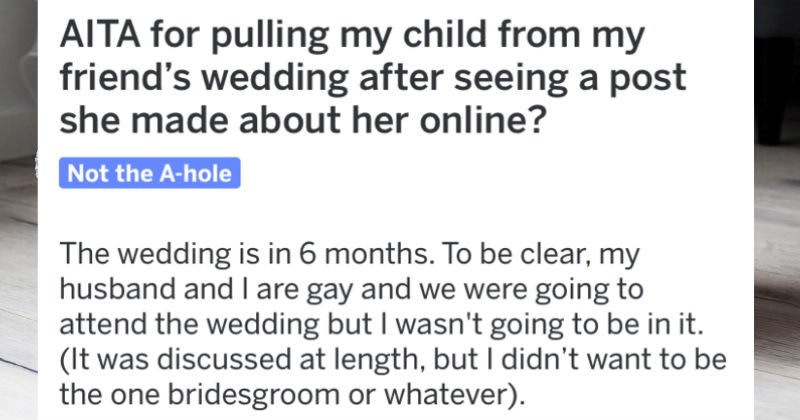