Oh boy, we're back at it again with a fresh collection of totally random and hilarious Tumblr gems. These will help occupy your existence. You haven't really lived till you've fallen down a Tumblr rabbit hole. So follow that rabbit and check out even more amazing funny Tumblr gems 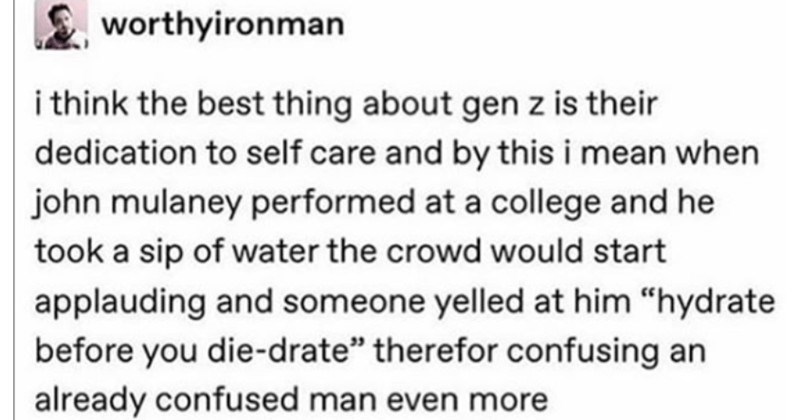 Funny Tweets That Hit The Spot

Every now and again Twitter is a place where actual funny observations and fails are shared, and it's not just a continuous stream of news headlines. In this case we have a fresh batch of Twitter funnies that we certainly got a kick out of. What's better than laughing at some of the best (or worst, depending on your look at it) the internet and social media has to offer by way of ridiculing people who really should choose their words more carefully... If you want even more funny tweets, then look no further. 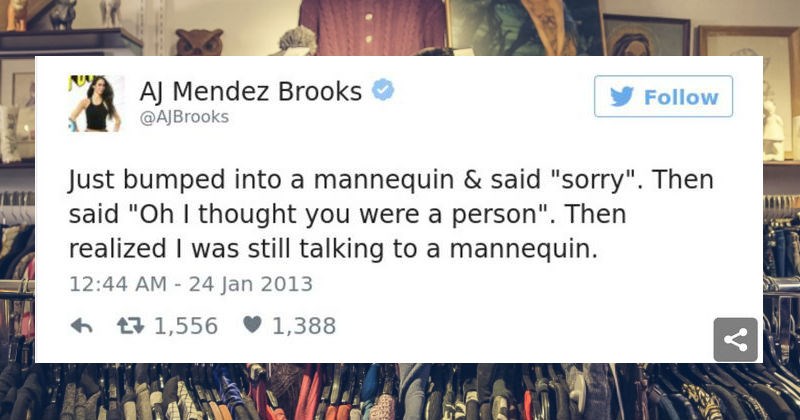 Ah, the good old minds of Tumblr are back at it again. Can't say you've really enjoyed all that the internet has to offer if you haven't fallen down a strange rabbit hole on Tumblr. So follow the rabbit, whatever color it may be, and check out even more funny Tumblr posts that are simply humor at its best. 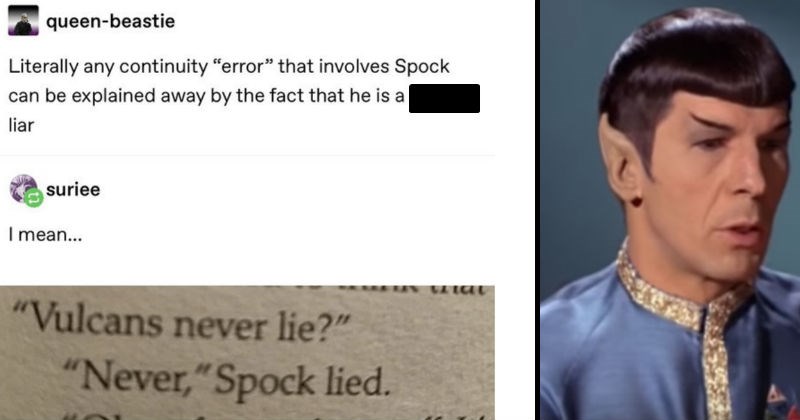 If you've ever struggled through working customer service, then you have a solid grasp on how unbelievably frustrating it can be to deal with an onslaught of unruly customers that just seem like they want to be mad at the world. These 18 relatable memes capture the world of working retail, in all of its unfortunate glory. Sometimes customers are really just the worst. No matter how glued that smile is to your face, they can wipe it off in a split second with their behavior. There is nothing worse than an obnoxious customer you have to smile and nod at and allow to vent their pent up anger and sexual frustration at you. But at least keep yourself going with some of these super close to home work memes that are all about the work week. 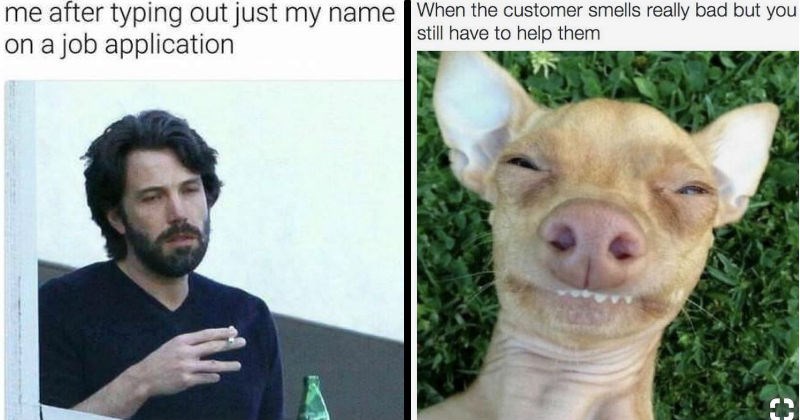 Pet Shelter Gives Cats Insane Names, so We Found Like 37 Good Ones

Austin Pets Alive has recently gotten some attention on twitter for their unorthodox cat naming. We decided to root through their archives and see what we could find. We weren't disappointed. For a funny cat adoption fail, here's a sorely mistaken animal lover who thought they had found a stray cat. Or, if you are wondering how bad people's names can get, check out this list of people whose parents simply hated them enough to give them such an unfortunate name. 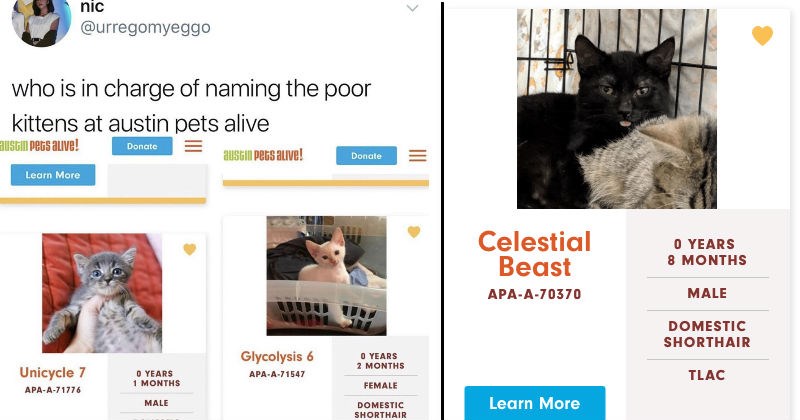 25 Of The Most Chaotic Good Things People Have Ever Done

We live in the middle of chaos. These people decided to throw some good energy into the mix with gracious acts of selfless kindness, and often times, without even gaining anyone's recognition. Next time you find some money conveniently lying around on the ground, consider the possibility that someone else left it there for you! Sometimes it takes a person with something extra, to make that move, to roll the dice, and say f*ck it to fate. We salute you Chaotic good people, you keep us on our toes.

Check out one of Reddit's finest heroes with these hilarious examples of trolling by one of the best. 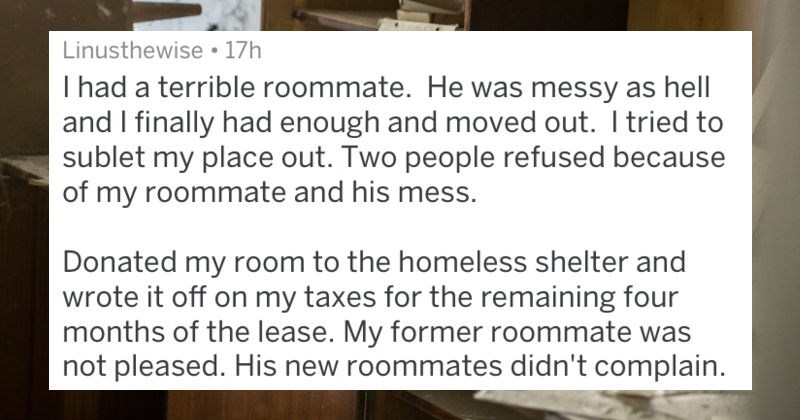 This poor and sleep-deprived soul dealt with the maddening reality that is being robbed of sleep, in arguably one of the best ways possible. And now we all get to enjoy the great resulting gifts he shared on Twitter. We're definitely impressed! He really captured the essence of each breed, and turned uninteresting facts into chuckle-worthy quirks. And if you really want to get into foxes as much as he did, here are a bunch of quick fox images to use as a new profile image to start. 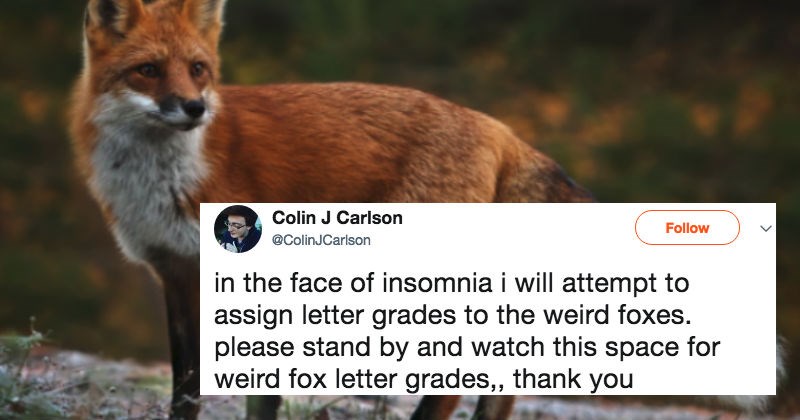 So, apparently some of these were promotions (Dave/Dove and Prongles - Cards Against Humanity promo), buuut that doesn't mean they still didn't throw their fair share of customers. There's almost something admirable in an off brand's stubborn attempt at fitting in with the rest of the products. Also, let's be real: those off brand cereals taste the exact same as their pricier counterparts. Same thing with the deodorants and dollar store perfumes and cologne, they are 1:1 the exact same thing as their originals. But at least no matter how good or bad the branding is on these projects, it can't be nearly as bad as some of these peoples' names. 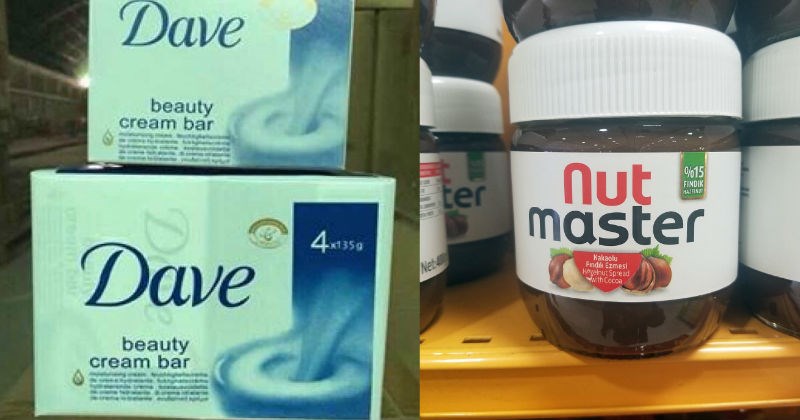 These people are living their absolute best lives... No one can say that they aren't shining examples of certain parts of mankind's abject failure to evolve from Neolithic times. And nothing is better than continuing to find out just how wacky Walmart can be. But clearly something is driving these people to dress like they've been on a month-long bender. Maybe these memes will be the missing link between the rest of humanity and these anomalies 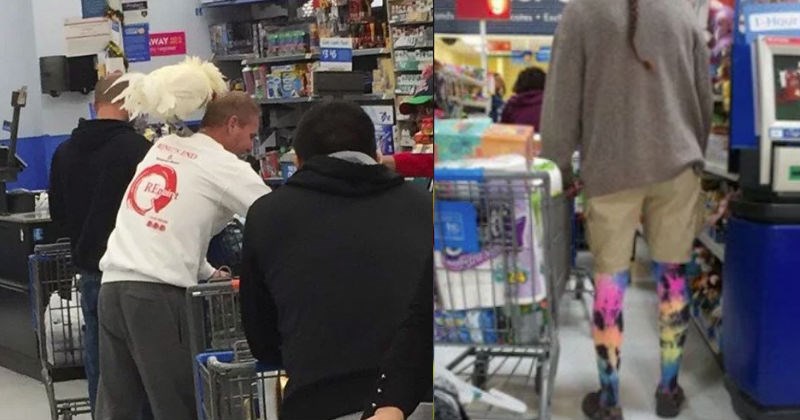 27 Hilariously Dumb Moments That Are Literally Not Wrong

It's like the world is one great big dad joke. God bless these people for proving it for us once and for all. Did you hear about the restaurant on the moon? Great food, no atmosphere. Life on earth in 2019 can best be described as a meme. And when life's a meme, all you can do is look at even MORE memes.

Sometimes though humor needs that extra oomph, that edge to it to get you going. Well we are happy to oblige and give you some of the best dark humor memes available today. 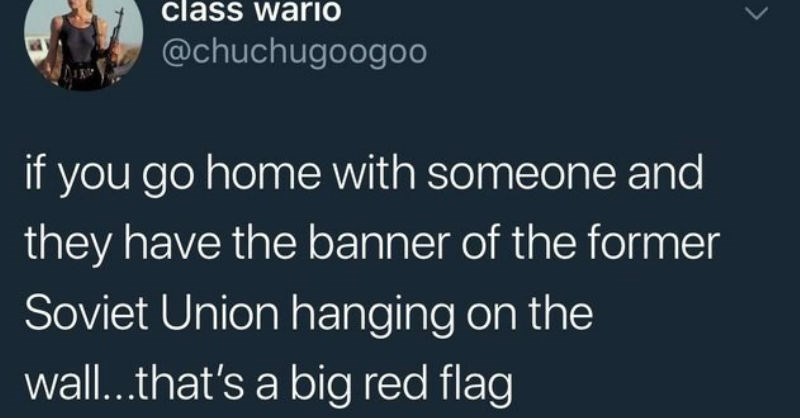 Not only are some of these hilarious, but they're also super relatable. Sometimes we fall so head over heels, we don't even see the stop sign until it smacks us square in the face. This is why brutal honesty is the way to go on the first date. Tell them everything up front, get all the dirt out in the open. If they don't get up, they're a keeper!  But check out some of the most savage trolls AskReddit has ever seen from one of its prodigal sons. 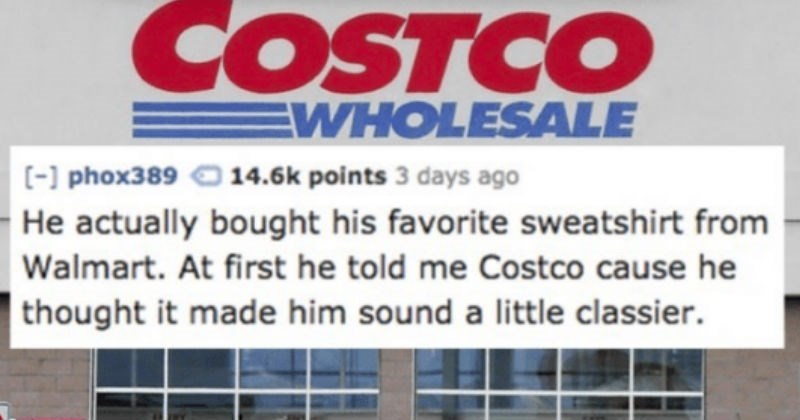 You never know what you can pull off with a little creativity and some tenacity, and a lot of rejection (a lot). But take heart and realize that no matter how hard you try, your pickup lines wont be as cringe-inducing as these gems. But these are unfortunately the exception to the rule, because most people can't Tinder to save their lives. These gormless Tinder stars are about as close to getting laid as Britain is to Brexit. 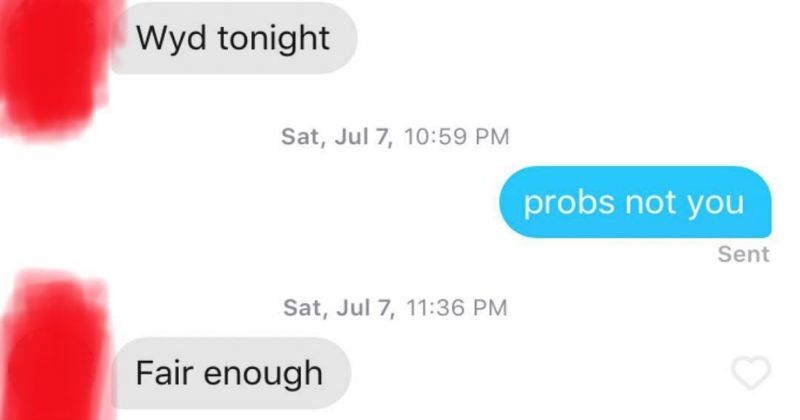 Big ups to her for not losing her sh*t on this one. Because if I were here I would have been at the police station reporting it since "hello". But it baffles me that Craigslist even had a personals section to begin with. What did they expect on a second hand site, except to find second hand intimacy and relationships (depended on how much you want to pay).

But clearly this guy isn't alone, because some people have had chance encounters with who they believe are their life partners, even though they have no idea, and will probably be getting a restraining order when they see the Craigslist posts. Buit some people took it way too far, like this Craigslist creep who definitely needs to be found and given shock therapy. 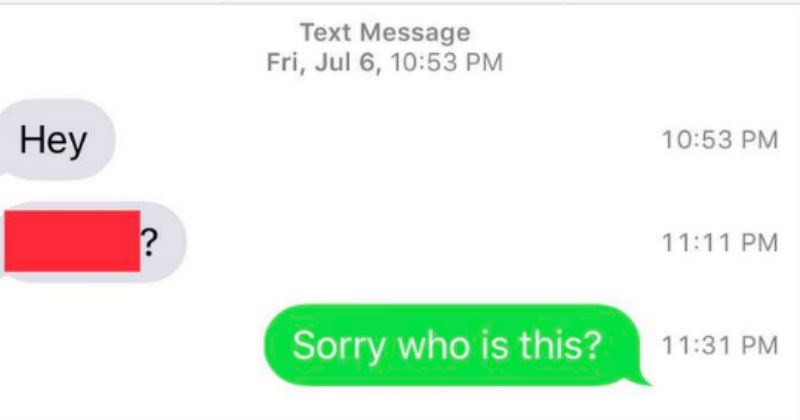 15 Hazardous Job Sites That Are Literally Not Safe For Work

Don't let OSHA find out. Or the union. They'll have a kitten if they saw these places. So much for employee welfare. Some of these solutions to get to hard to reach spots to work are pretty clever. Most are just massive safety hazards waiting for a lawsuit to happen. But sometimes people have a one track mind, and just need to get done doing whatever they need to do, caution and common sense be damned. This guy knows all about when common sense goes out the window. 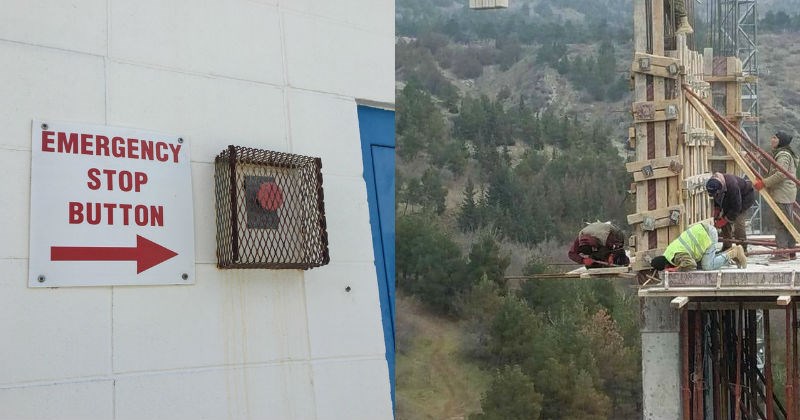 If you have ever watched Fashion Week, you know that the designers are all on heavy doses of narcotics and hallucinogens. That is the only way they could conceive of anyone walking down the street like they dress some of these models. But loving the hell out of this woman's taste for putting a spotlight on how absurd modeling has become.

Ever wonder how deep and dark the rabbit hole can go? Check out this set of dark memes made especially to see how black your soul really is.

Need to just let out a guffaw and get your laugh on? These hilarious memes and mood-boosting pictures are just the thing for you 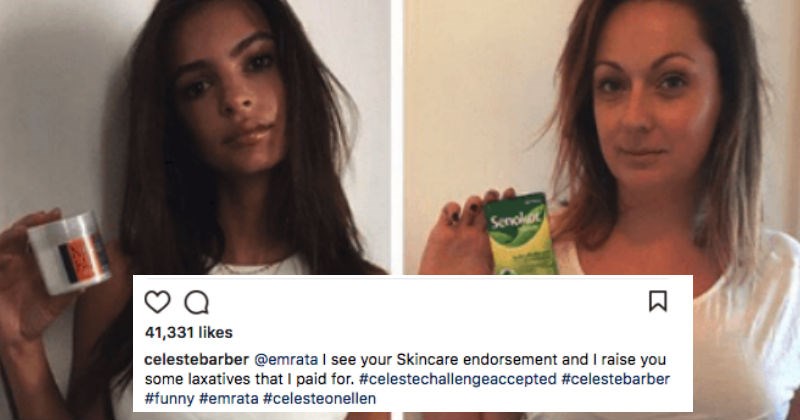 As unflattering and honest as the car itself. But this guy could sell s**t to a sewage plant. And he definitely needs a comedy special on Netflix, before Comedy Network sucks him up and makes him into another nothing. I might even take some of his material myself.

We all had that jalopy that every time we turned the key we prayed it didn't explode. It's quirks and safety hazards, we took as character and the million dents bumps scratches and jerry-rigged, were just "adding to the vintage look". I can't wait until you explain the bumpers falling off when you close the doors "It was their time...".

Craigslist can be a great place to find hidden gems, and cars are not the only Craigslist goldmines some people have found. This individual probably made enough to pay his mother to rent the garage out at least another 6 months. This guy ingeniously disguised his wares as innocent household items, and you won't believe how people reacted. 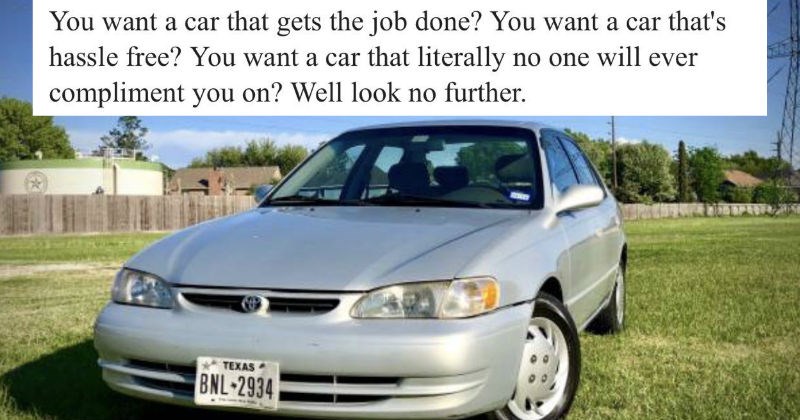