How about that pure look of unadulterated, (likely) booze-induced bliss before the other chick brings the damn captain falcon kick down? Phew. 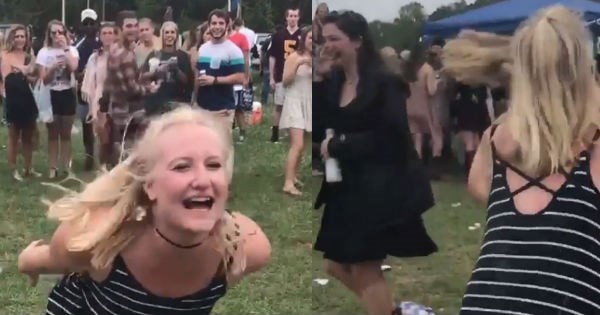 Despite bloodying up the nudes-thirsty hound's nose a decent amount, it'd appear that angry older brother was all 'loud noises' and not a whole lot of anything else. I mean he really lays into the dude, and the guy still won't get his ass up off the couch. Even after that fiery demand, “Get da f*ck out ma couches." Better luck next time, bro. Your 'couches' are still occupied.

Dickhead Keeps Using the N-Word, Woman Cleans His Clock and Then His Pants Fall Down

If I've said it before, I've said it a hundred times: Nothing makes a fight better like someone's pants falling down.

Here we have a classic example of why racism will get you smacked. According to the video, this guy got "jumped by some black people so he's a little pissed off." He's at the convenient store complaining about it, while a woman is trying to live her goddamn life. As these things tend to go, he keeps using the n-word, and "he kept on doing it to her over and over again." What happened? I think you can figure it out:

It goes without saying that racism will get you beat up. Sorry, but that's just how the world works. You can't just be blaming one problem you had on a whole group of people, and more so than that, you can't be using the n-word.

But man, is there anything more pathetic than getting beat up and then having your pants fall down. So good.

Via UNILAD US
Repost
Recaption

She even took the added effort of posting this scathing account of their fisticuffs 'a flying altercation:

It's Steph Curry vs. Pretty Much All The OKC Thunder In Half-Court Shoving Match

First, he dunked, which, as you know, just the coolest.

But then things took a turn for whatever reason, and Steph Curry got in a shoving match with Semaj Christon.

The moral of the story here is that you don't go starting shit with chicks from Boston on fratastic, drunken beaches during Spring Break unless you're ready to eat sand after having your bell brutally rung. Everything about these videos screams chaotic shitshow. Gotta love the ending there when her friend, or more likely -- some random beachcombing vagrant -- tries to rally her with a quick hit of nicotine. 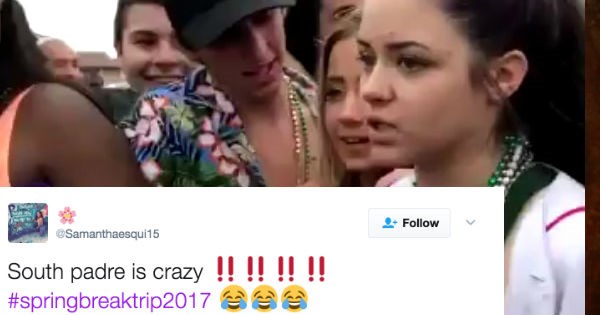 For all it's low-scoring, distance-running patience, soccer can be a pretty violent, godless sport. While it might seem like all orange slices and shin guards, it's really a boiling pot just waiting to spill over.

Sunday's game between Gama and Brasiliense was definitely in the latter category. Watch these fans storm the field during the game, cause mayhem, and do this to one poor bastard:

You've got to hand it to our shrieking, pussy fart of a rat bastard in the red polo tee here for shamelessly tapping out of a fight by quite literally submitting himself in the fetile position. It's so pathetic I'm almost, almost impressed.

Nascar, for the most part, is just driving in circles. Sorry, dudes, but it's true. It's not that fun to watch, unless of course there's a fight, which there was yesterday.

Apparently, Joey Logano bumped into Kyle Busch on turn four, causing Busch to spin out and costing him the race. Obviously, Busch was none to happy about this and decided to thank to Logano personally after the race with a little punch in the face.

I don't know. I was racing him right there at the end with our Pennzoil Ford. … Kyle and I usually race really well together and don't have any issues. He tried to pin me down into the corner underneath Brad. We about crashed and I was still trying to gather it up in the center. I was going to spin out, so I'm trying to chase it up (the track) and he was there.​

Here's the incident itself:

But people on Twitter described it as the best thing ever.

Some wild and crazed folks were having a notable Sunday Funday while out at a fine IHOP establishment in Fort Meyers, Florida. There you go again with the steady procession of explicit behavior Florida. Pull your shit together. Witness the cop who wasn't having any of the messaround, right around the 2:20 mark.

Video Claiming to Be Best Street Fight Video of 2017 Falls Short, But the Commentary is a Knockout

The guy filming this is 'just trying to be a good camera man', and I'm over here wondering how far his head was up his own ass to think that the vertical angle was the perfect play. Outside that horrid mistake, his commentary is the highlight of the laughably chaotic backyard brawl.

This dude's that loudmouthing, gum-flapping, perpetually provocative court jester we'd all cross paths with at some point or another in a Call of Duty pre-game lobby. You know, the one that has all the energy and enthusiasm for the banter, but none of the passion to actually join up in arms.

Outside the commentary, this 'epic fight of 2017' looks more like the beer-soaked, white-girl-wasted brawl that ensued at the most recent high school senior year kegger, where one bullish bro lit a fire up under another thin-skinned bro's ass for talking smack about his Snapchat story after publicly mocking him for snail-like beer shotgunning abilities. Or something mindlessly stupid like that.