Four years ago James Young suffered through a tragic, life-threatening accident when he lost his arm and leg after falling in between two train carriages. The subsequent days were a dark time for Young, but he sought solace through a true passion of his--gaming. Young would play his Playstation 4 using his right arm and teeth in a feat of true dedication.

As fate would have it, Konami eventually featured an ad calling upon all interested gamer amputees to enter a raffle of sorts, in which the selected applicant would receive a prosthetic inspired by Konami's Metal Gear Solid. Young was fortunate enough to be selected, and even offer up his two-cents on the prosthetic's design.

The carbon-fiber limb is controlled by muscle signals from Young. He can shake hands, lift groceries, and pick up small objects like coins. Young has already taken the initiative to start up his own fundraising campaign, with hopes to further improve upon the technology for future users (an example being the arm weighs 10 lb, requires harness and gel, and can't be worn all day).

The guy is pretty much the Bob Ross of gadget-casting. By simply using a Raspberry Pi Zero, a USB hub and clay, Doris (lyberty5) created a SNES that could go head to head with Nintendo's upcoming mini-NES on cuteness alone.

Mario, Luigi, and Wario Took the Wrong Pipe, Ended Up at the Tour de France

Three dudes dressed as Mario, Luigi, and Wario briefly ran alongside cyclists in the Tour de France. Either that, or I haven't been paying attention and Mario Kart has taken a really strange turn. 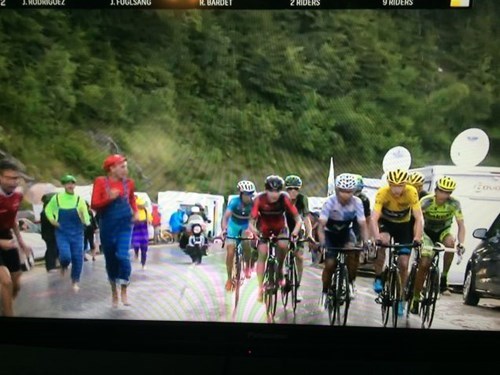