Ready to take the plunge? Skydiving is an incredible sport and adrenaline-fueled past time. So soar down through these jokes and puns and keep your chute at the ready.

After a Terrifying Mid-Air Collision, These Skydivers Somehow Make it Out Unscathed

Sky Pirates Will Liberate You From Your Shoes

Slip 'n Slides Are Way More Intense When They Follow a 5,000 Foot Drop

A Wardrobe Malfunction in the Sky Becomes an Accidental WIN

Extreme Proposal of the Day 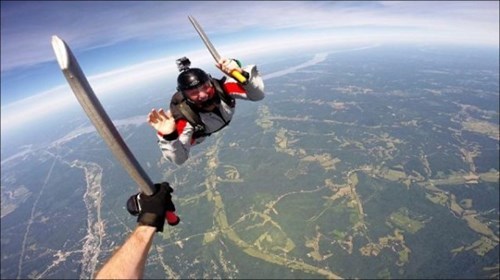 These Skydivers Look Like They're Dancing in the Air

This Skydiver Just Really Wanted to Put Some Money Down on a Used Sedan... in Style!

Some People Weren't Cut Out for Skydiving

Via kateswiderski
Repost
Recaption
Comments
The Daily What
Favorite

Crazy Moment of the Day: This Skydiver Was Almost Struck by a Meteorite

One summer day in 2012, Anders Helstrup and several other members of Oslo Parachute Club jumped from a small plane that had taken off from Østre Æra Airport in Hedmark.

Helstrup, wearing a wing suit and with two cameras fixed to his helmet, released his parachute. On the way down he realised something was happening.

"I got the feeling that there was something, but I didn't register what was happening," Helstrup explained.

Immediately after landing, he looked through the film from the jump, which clearly showed that something did happen.

Something that looks like a stone hurtles past Helstrup – clearing him by only a few metres.

"This is the first time in history that a meteorite has been filmed in the air after its light goes out," says geologist Hans Amundsen.

A Skydiver and Plane Collided in Midair, Miraculously No One Was Hurt 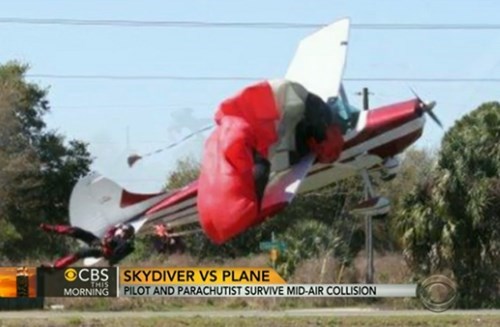 New Footage From the Baumgartner Jump

"Not My Job" Moments Of Professional Apathy