McDonalds, America's favorite fast food joint. If you are a Ronald fan, you won't leave disappointed. 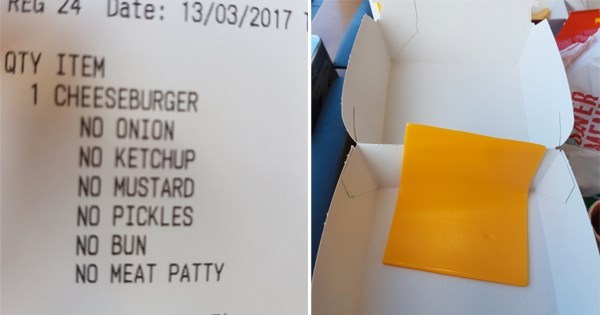 Like the temptation of touching a hot iron, diners at McDonald's have long been tempted to stretch the limits of customization at the golden arches. Sure, there's the old ordering nine McNuggets with only seven nuggets, but that's kids stuff.

Twitter user @coLMerchant took things to the next level, ordering nothing but a single slice of cheese the hard way. He placed an order at one of those fancy computer ready kiosk McDonald's, you know the one stealing everyone's jobs, and put in an burger sure to fry the computer's circuits: "NO ONION, NO KETCHUP, NO MUSTARD, NO PICKLES, NO BUN, NO MEAT." That's one way to get a veggie burger at McDonald's.

I ordered a cheese. Not sure what I expected. pic.twitter.com/3MxyKHNIw4

He got what he wanted, and that single slice of cheese only cost him 99 cents. That's only 99 pennies. Talk about a value.

This man is a hero. Enjoy your cheese slice, sir. You've earned it. 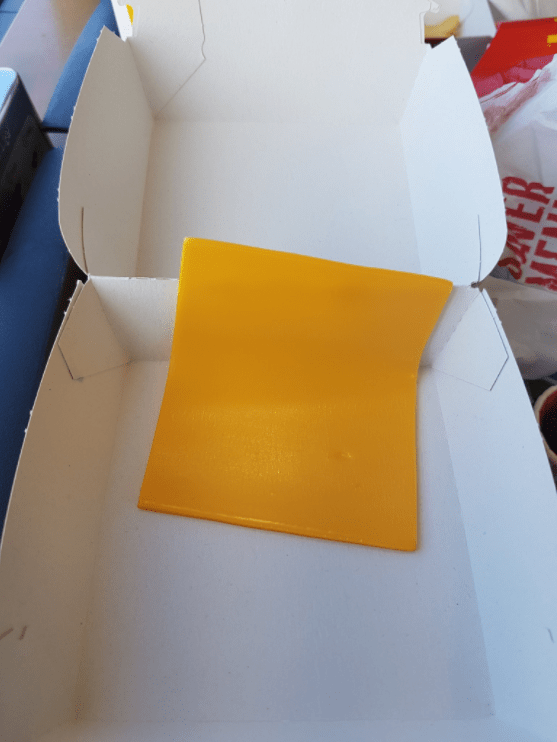 In all honesty bro, you ordered a damn 'cheese'. You should've expected nothing more or less, and also, just like why? Why you do dis in the first place? 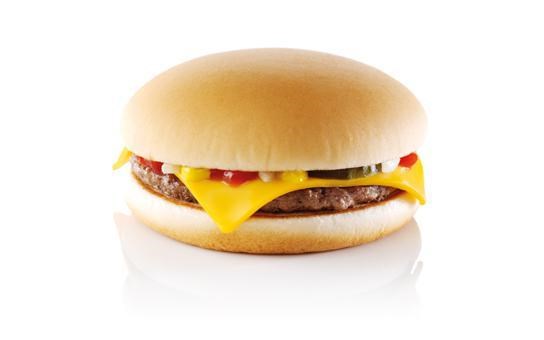 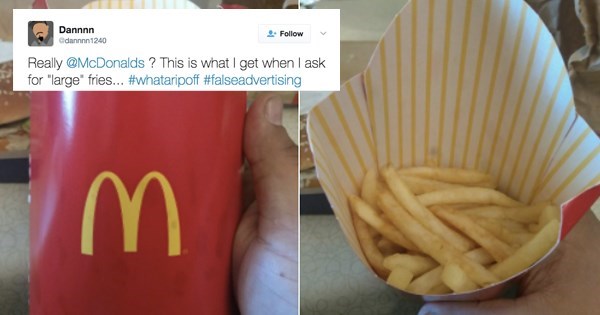 Yes, I would like fries with that — more fries that that, though.

Lots of people on Twitter are complaining about the amount of french fries they get in a large fries from McDonald’s. Apparently, they’re only getting half-filled containers like this:

So I ask for a large fries from @McDonalds and this is what I get.... large box half empty. Happens everytime. pic.twitter.com/TJrXnOwrf0

But also, did this dude check the bottom of the bag? Probably not.

He’s not the only, though. Lots of people are blaming McDonald’s for near-empty containers (as if they didn’t eat them shits on the drive home).

Just got home,got my @McDGreaterSA large fries and this is what I get, looks half empty,what am I paying for? Not cool @McDonalds , not cool pic.twitter.com/ukBeURP1En

@McDonaldsUK This was your so called large fries served at Tonypandy today. Why did I waste my money. #McDonalds pic.twitter.com/a2h2hOkBiJ

@McDonalds this was meant to be a large fries but seems like a small to me second time in last two weeks..... pic.twitter.com/4LUzpFC3zk

McDonald’s, presumably tired of getting hit up on Twitter finally responded by telling customers to direct their complaints at the point of sale — at least they can then verify that those fries aren’t at the bottom of the bag or in the person’s stomach. They said:

“There is no policy in place which suggests French Fries should be served in a carton that is anything less than full.

“Customer service and experience is one of our top priorities and we are always disappointed to hear when our food falls short of customer’s expectations and our high standards.”

I mean you could also do like a certain reality-TV gameshow host and take your complaints directly to the Grimace:

The folks at McDonald's hear you. Want all-day breakfast? Boom. Here's a McMuffin at 7:23pm. Want a smaller Big Mac? Boom. Buh-bye middle bread. You want a McRib? Sorry, you've got to wait for pork prices to plummet again.

But one thing's for sure, they know that you're having a hard time with that Shamrock Shake, especially that new one with chocolate in it or something. And because McDonald's loves you, they've hired the team behind Google's modular smartphone Project Ara to produce S.T.R.A.W. (Suction Tube for Reverse Axial Withdrawal).

What's the difference between S.T.R.A.W. and straw? McDonald's new over-engineered bad bou comes with a hooked end and fore holes, which were designed specifically to allow people to finally taste their thicker than thick Chocolate Shamrock Shake.

However, this project is a bit of a Willy Wonka Golden Ticket: S.T.R.A.W. is only available in 80 cities and limited to 2,000.

It really is your sucky day.

I'm Not Loving It 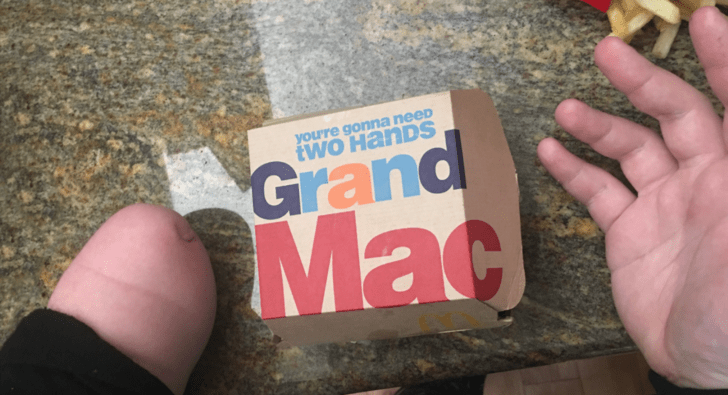 McDonald's announced they'll be giving away 10,000 free bottles of their Special Sauce on Thursday, January 26th; and the internet is a melting pot of excitement meets sassy indifference. Sassy indifference here being the whispers of, 'haven't we already had this available?' It's called Thousand Island Dressing. 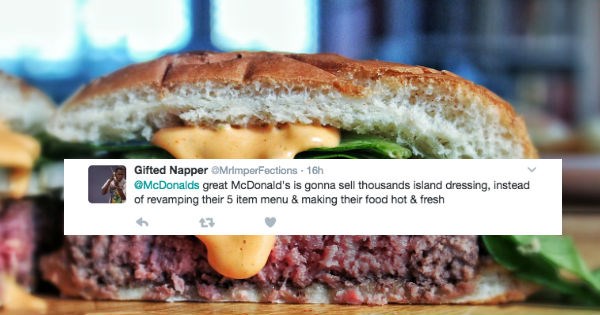 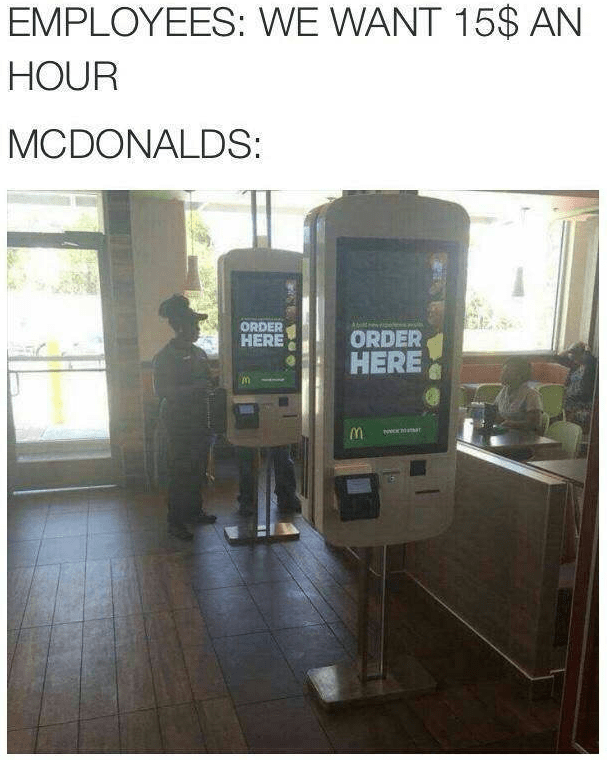 There was a problem rendering this video - it may have been deleted.
Via Unique Colours
Repost
Recaption

Southeast Asia features a special wedding tradition: “fetching the bride,” where the bride and groom do fun challenges to prove themselves worthy to their spouse. This dude, Chen Guanyou, honored his special day with his favorite special treat: A weekly McDonald’s run.

Dressing up like Ronald, a burger, some fries, and more, he and his groomsman threw together this ridiculous video, which will probably have his bride-to-be thinking twice about tying the knot.

Truth of the Day: See The Real Story Behind That Infamous McDonald’s Coffee Lawsuit

Adam Ruins Everything has spilled the beans on one of the most infamous lawsuits of the last 30 years.

You’ve probably heard the story of the greedy old woman and her dastardly plan to burn herself and make out with millions. Heck, they made a Seinfeld episode out of it.

But that’s not the real story.

Adam Ruins Everything spent last night ruining justice in their latest episode, and in the midst of taking the criminal justice system to task, he gave a run down of the real story of that greedy old woman who burned herself for money.

What actually happened was a 79-year-old woman, sitting in the passenger seat of a parked car, accidentally spilled McDonald’s coffee on herself. While she admitted the accident was her fault, McDonald’s coffee was being served at 190 degrees — nearly boiling — and left her with third degree burns. McDonald’s said that their coffee was a hazard at that temperature, agreeing with the 700 people who had already complained during the previous decade.

Check out the full clip above and think twice cracking joke about a lawsuit like this. 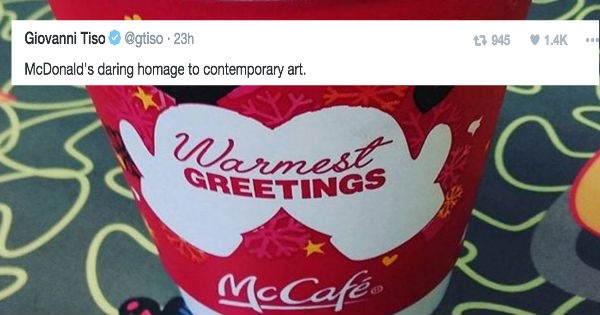 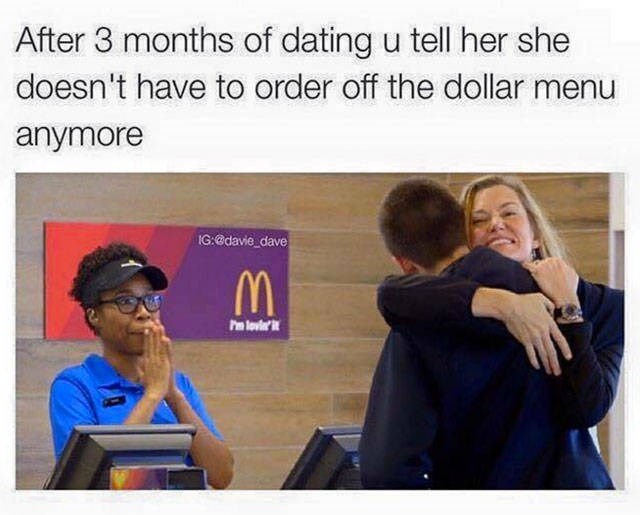 That Looks Like a Lot of Things, and Chicken is Not One of Them 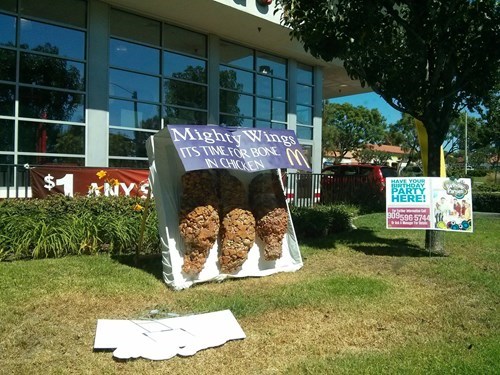 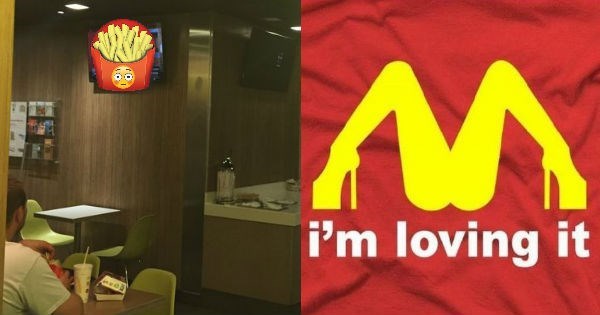 Chris Barnes, 32, was just getting ready to dive into his chicken nuggets when he looked up from his glorious meal to see naked women onscreen very clearly..gyrating. Apparently someone pulled off the screen heist by using an app via their smartphone.

A McDonald's spokeswoman said: “This is not content we would deem appropriate and regret it was visible for a short space of time. Having reviewed CCTV we strongly believe that this station was chosen by individuals outside the restaurant, made possible by certain smart phone apps which act as TV controls. Televisions are in place to enhance the customer experience in our restaurants, allowing them to access news, weather and travel information. It is unfortunate that some members of the public choose to ruin this for the majority.”

Catch a Rare Glimpse of Grimace 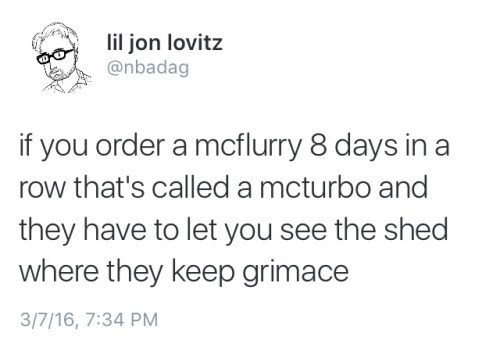 To Unite All People Within McNation 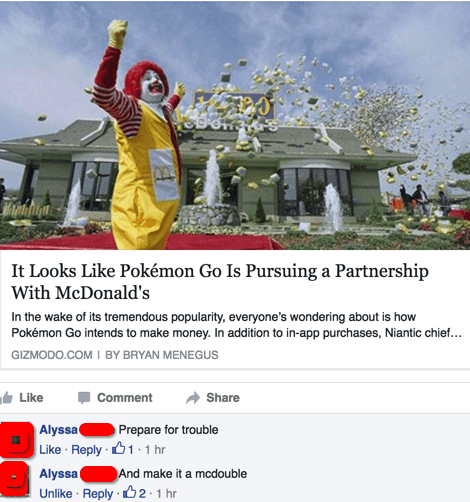 Is You Ready For Some McGrammar? 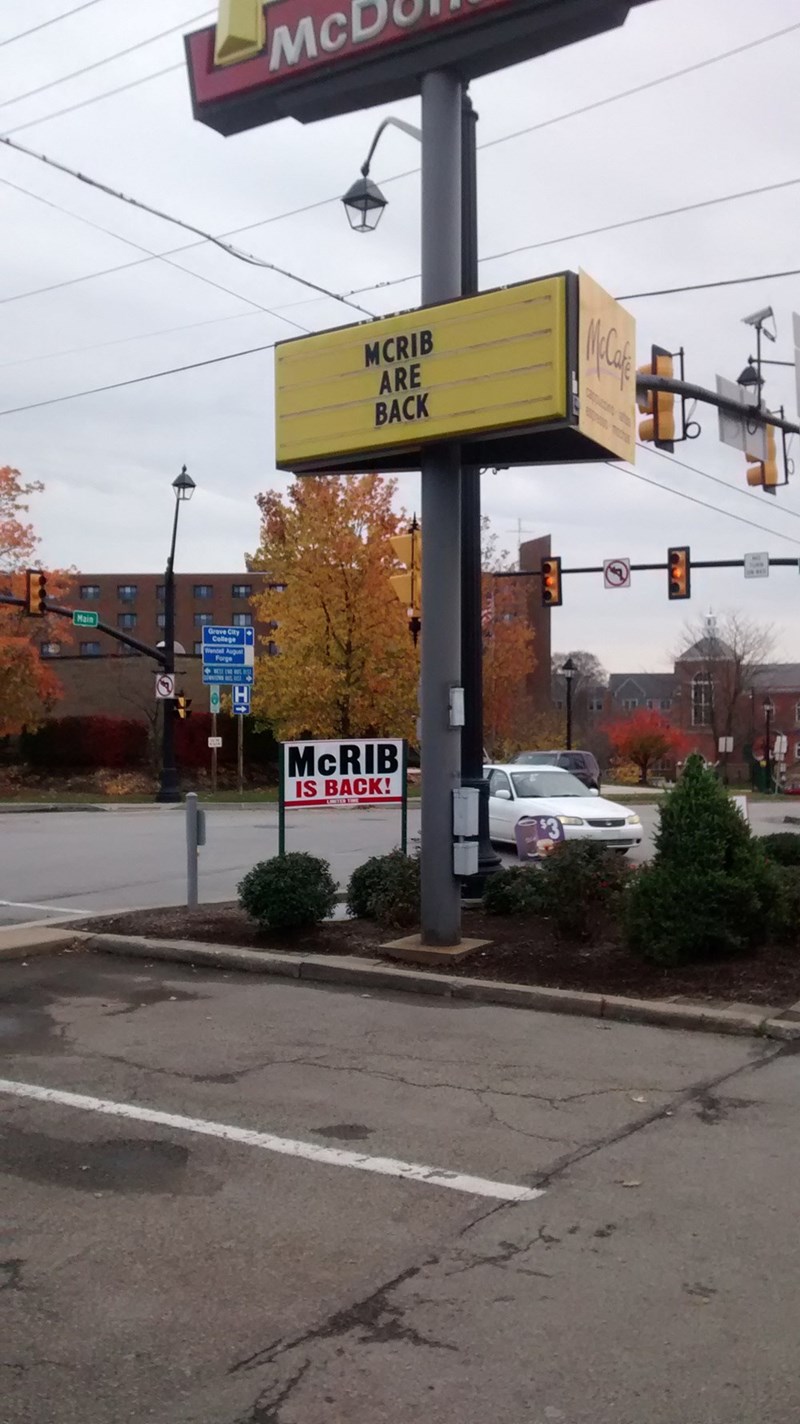 The Annoying Things People's Spouses Do