Guy Trolls "Kyle The Scammer" On Instagram, To Oblivion

We love nothing more than a scammer losing to logic. It's a beautiful thing, really. In this case, a dude gets contacted by a scammer bro on the old Instagram, and decides to have some fun with him. Nice touch with The Simpsons reference too! 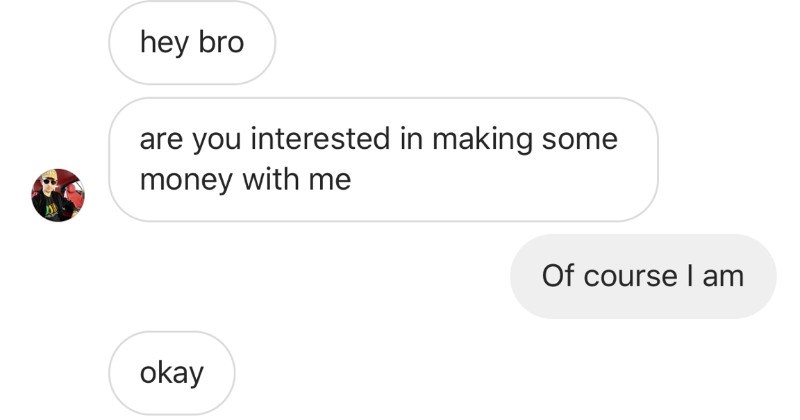 It's an interesting time to be alive. With so many apps at our disposal, people are able to edit and morph and tune their faces and bodies to such an extent that their picture can end up looking like a completely different person, from the one that the rest of the world sees. Enough with all the deception. These people either rock some surreal kinds of looks that escape our definition of what's physically possible, or they got caught red-handed trying to pull a fast photoshop on the online world. 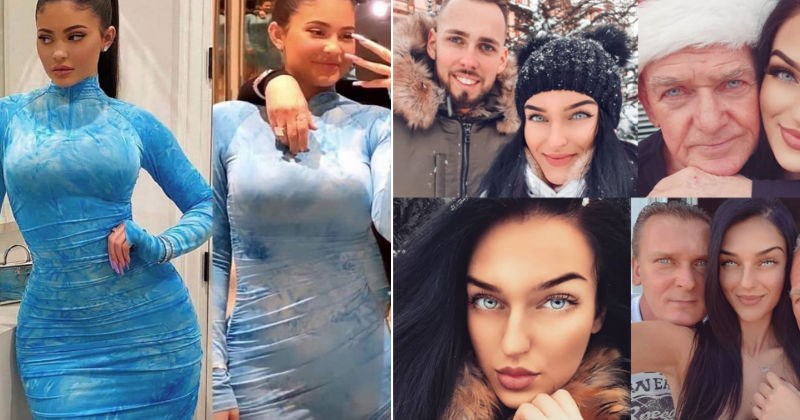 Photographers are sharing the weirdest photo shoot requests that they've received from Instagram influencers. Never underestimate the lengths that an influencer will go to ensure that their photo is ridiculous, unique, and well suited for viral status. Can't imagine being the one holding the camera in some of these situations. 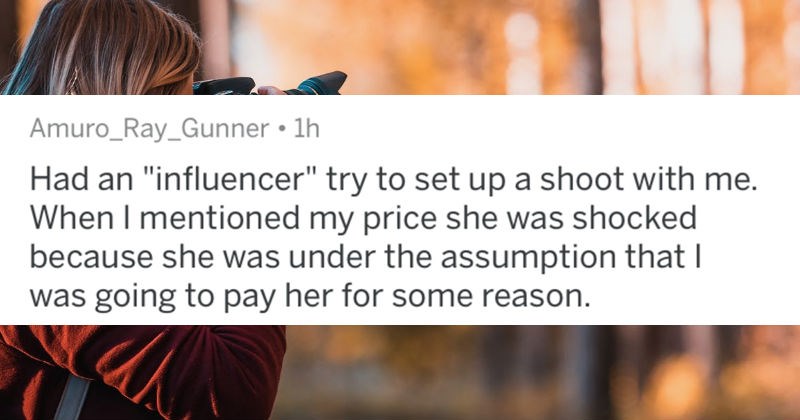 Ryan Reynolds is back at it again with his best roast yet. He decided to poke fun at Henry Cavill's ridiculous CGI'ed Superman mustache back in the Justice League days. At the time of the movie, the mustache was the talk of the town. People realized it looked pretty absurd when they tried to remove it for the movie. So, here we have Reynolds having some fun with it. And the best part is that Cavill acknowledges the infamous fail in the comments section. 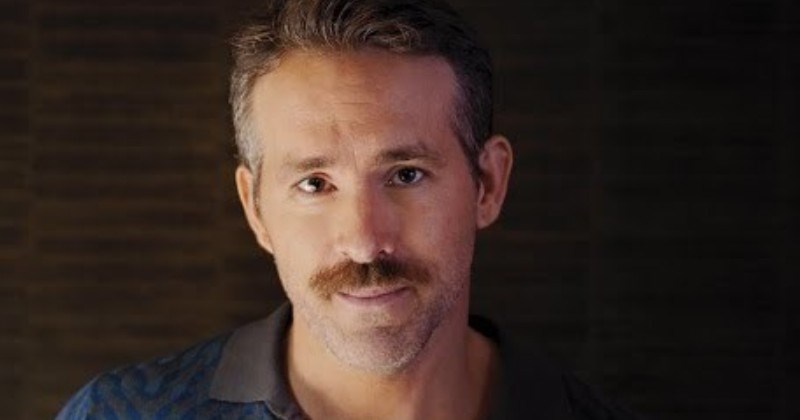 Rob Lowe's son is doing phenomenal work at trolling all of his dad's Instagram captions. He clearly knows a whole lot more of the story going on that isn't written out in the caption. And for that, we're thankful.

Rob Lowe's sons apparently love to express their love by trolling him endlessly on Instagram. They've seemingly made it their duty, and they're doing a hell of a job at it. 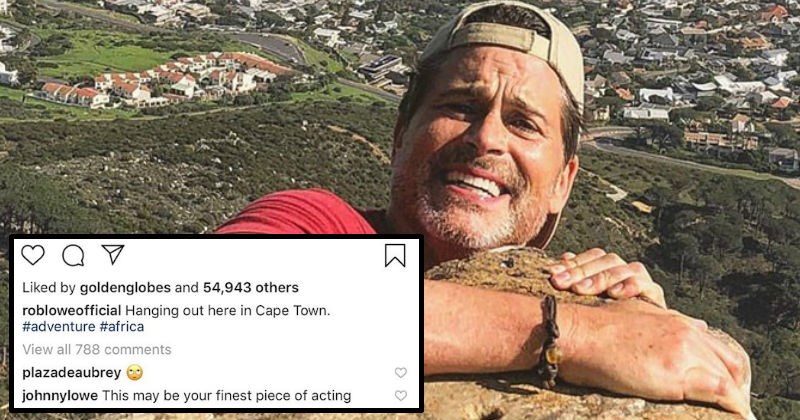 Tiffany Mitchell's an influencer/lifestyle blogger based out of Nashville, Tennessee. In a ridiculous series of images that have since been deleted, Mitchell's photographed at the scene of her utterly devastating "accident."

She's pictured next to a water bottle with the logo facing the camera in suspiciously high focus, and a man that could be a model. To make matters more unbelievable she's not showing any scratches in sight. As far as social media morons failing hard this is definitely a contender for one of the most mindless and insensitive things we've seen in a while.

That being said Mitchell has told Buzzfeed that she'd never stage a traumatic accident to turn it into a brand campaign. 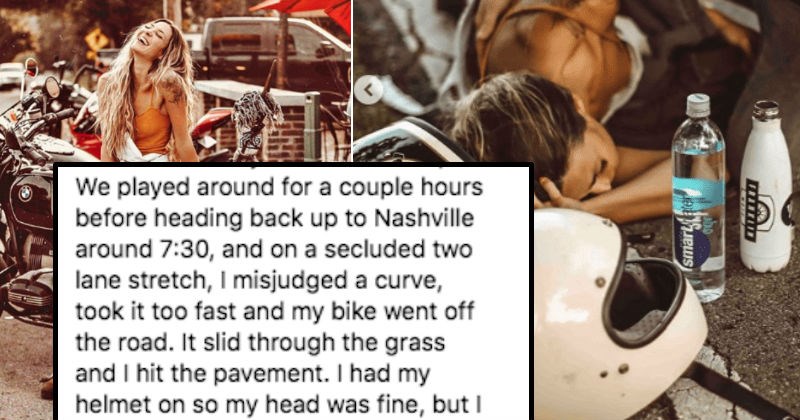 Rob Lowe's sons would appear to love to roast the shit out of him on Instagram. No blow is too low to the Lowe's. These also might deepen your appreciation for how handsome a man that Rob Lowe is. It's ridiculous. 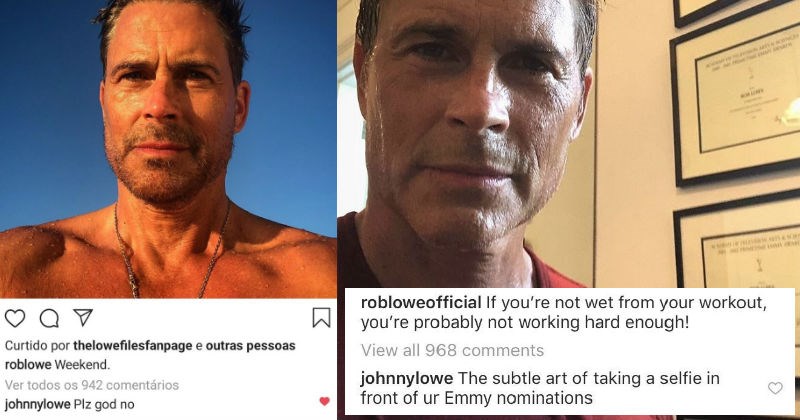 Young Woman Makes A Fortune Off Her Cosplays On Instagram

Brazilian Maria Fernanda, is making bank off her cosplaying efforts on Instagram. She employed her cosplay skills on Instagram to rack up a sizable following, and eventually was able to monetize her account. Apparently Influencer Marketing Hub estimates that each of her posts on Instagram generates anywhere between $782 and $1,213. That ain't too shabby at all for a little work on Instagram posts. 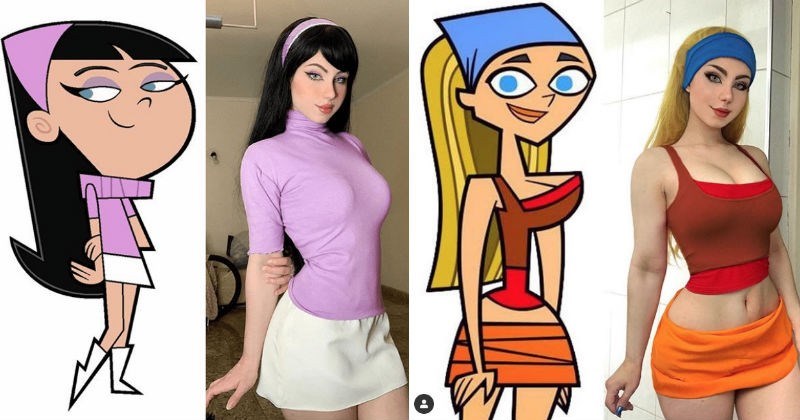 Yes, that striking soul-piercing blue lake in Siberia that Instagram influencers are migrating towards in the chase for the next great selfie, is actually a toxic waste dump. The company that uses the lake to dump waste for the Heating and Electric Station No. 5 was forced to release a statement amidst the aggressive, mindless stupidity. The statement reads at one point, "you can not swim in the ash dump."

Buzzfeed even reports that one dedicated influencer described the water as "warm and tastes sweet-ish." You can't make this level of stupid up. It's as if it walked off the script of a post apocalyptic movie itself.

Are these the end times? A bunch of influencers blinded by their own lust for social media viral fame that they disregard viable statements from concerned officials; and proceed to swim around in toxic waste dumps? We sincerely hope that everyone ends up being alright. 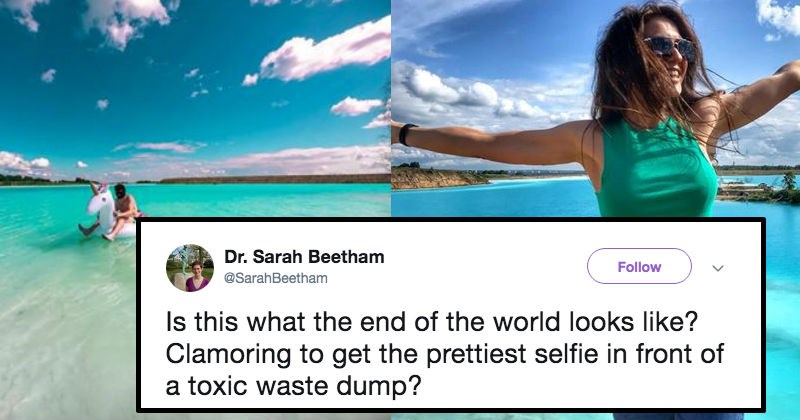 The National Park Service Crushes It With Witty Captions On Instagram

Whoever's running the National Park Service and hatching up these hilarious captions, seriously deserves a raise. Just the right amount of wit and wholesome humor to tie the nice pictures of nature together. 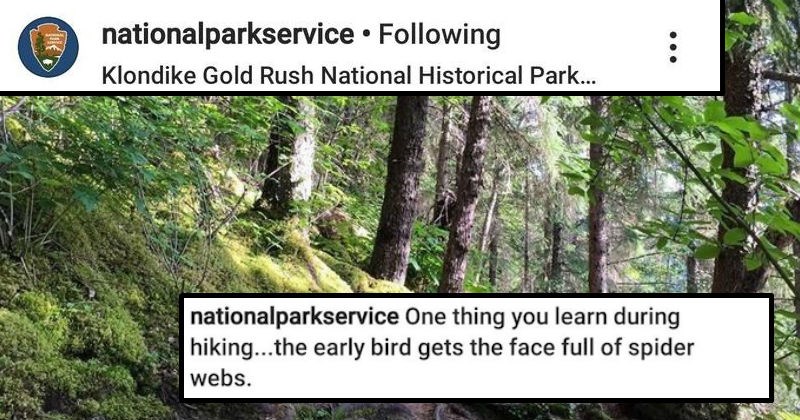 Belle Delphine why'd you have to go and do this to the world.

"Instagram model" Belle Delphine is really out here selling her "bath water" to thirsty gamers and shameless fans for $30 a pop. The 19-year-old UK-based cosplayer and model might be a shining example of all that's gone wrong with humanity, or she's just cracked the code and is playing the system to her advantage. And apparently that looks like used bath water. 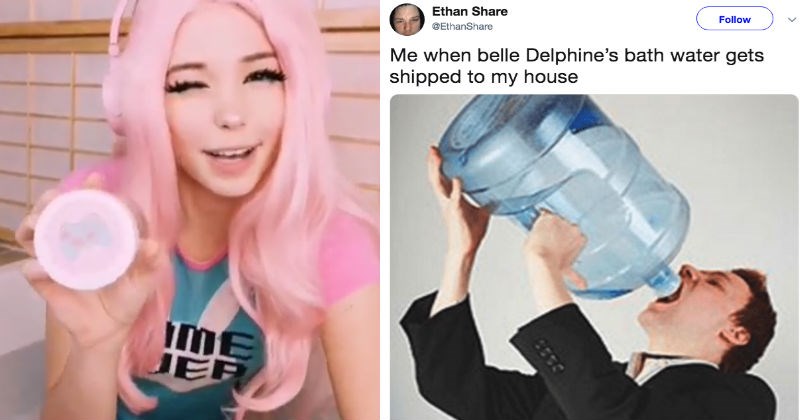 Former Sugar Baby Amanda Drago is not missing her sugar daddy, Brad. RIP, bro. Yes, it's all in the headline here. A seemingly fine example of humanity hitting some kind of rock bottom. Drago decides an appropriate way to mourn the loss of her sugar daddy is by roasting the shit out of him in a ruthless eulogy. Drago then proceeds to claim that the ghost of Brad came back to haunt her. Hell, maybe Brad was coming around to collect. Check out the eulogy and the video below. Brace yourself, it has a knack for hurting the soul. 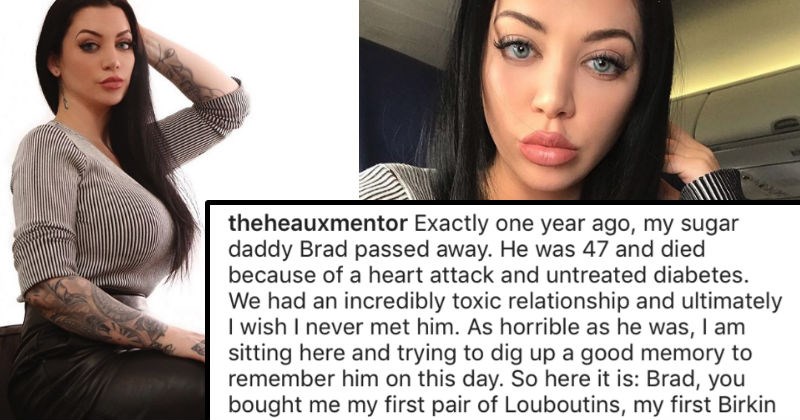 Look at that Instagram social media bubble burst, folks. Turns out having millions of followers does not guarantee people are going to be ready to throw money at a product you're advertising on social media. 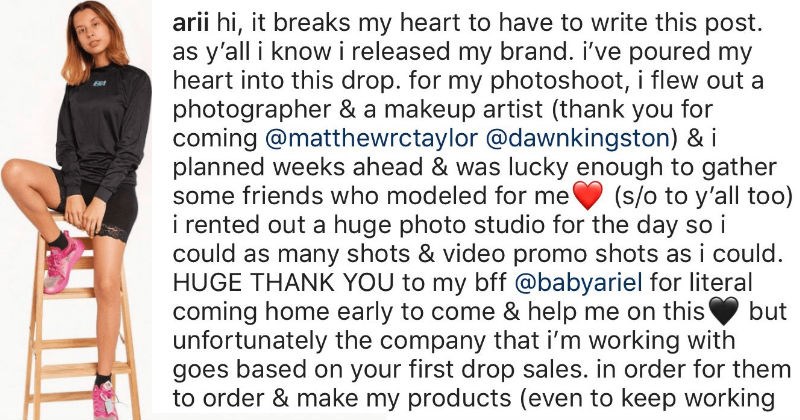 Entitled Instagram Couple Gets Roasted For Begging Followers For $11K

This terribly entitled "Instagram couple" is getting properly roasted after using their platform to beg followers for some money to take a vacation. Yes, these are the times we live in. Grim times, indeed.

According to the GoFundMe page, "We need funds now for preparation as well as throughout our trip. Every dollar, every message, every couch or garden for our tent, any help you can offer will help us go further. We hope you all enjoy and learn with us. TOGETHER WE CAN MAKE A DIFFERENCE."

Yikes. Yikes all around. 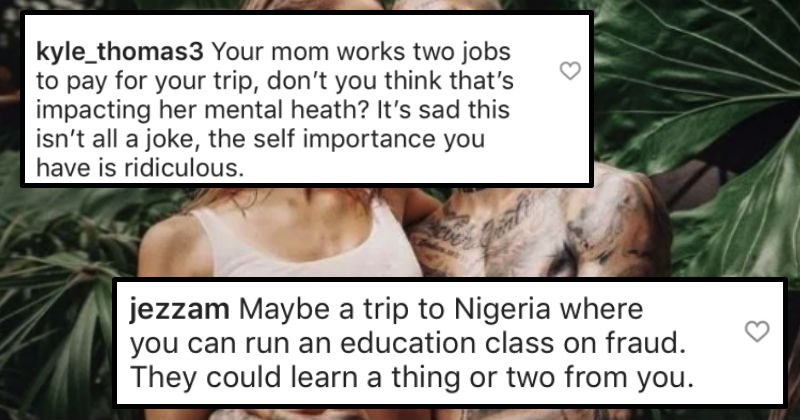 Instagram model Natalie Schlater found herself in a tight situation after posting a very questionable caption that compares her life to a rice farmer. The comments say it all here in terms of how the ignorance was strong and running amok in this post. 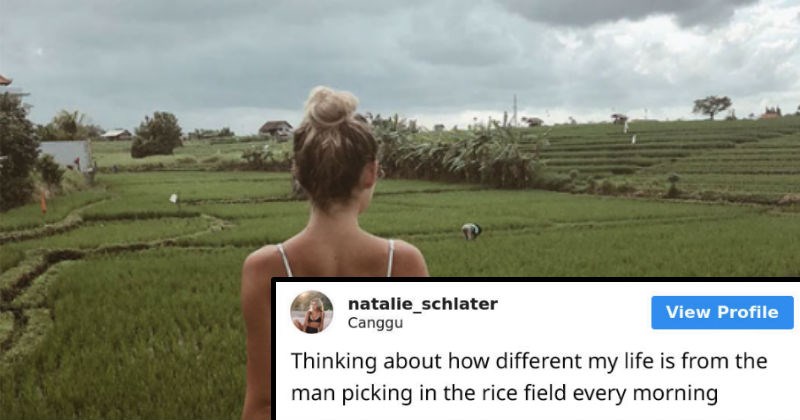