The world's not going to run out of aggressive entitlement any time soon. It seems as if we're destined to continue crossing paths with ignorant walks of life that have deluded themselves into thinking they'll be able to lowball sellers that know way better than to fall for the ridiculous antics. This particular choosy beggar expected a stranger to give them a custom wedding order as a gift. Well, that whole approach didn't work out for them. Check out some more entitled people and their uproarious demands over here. 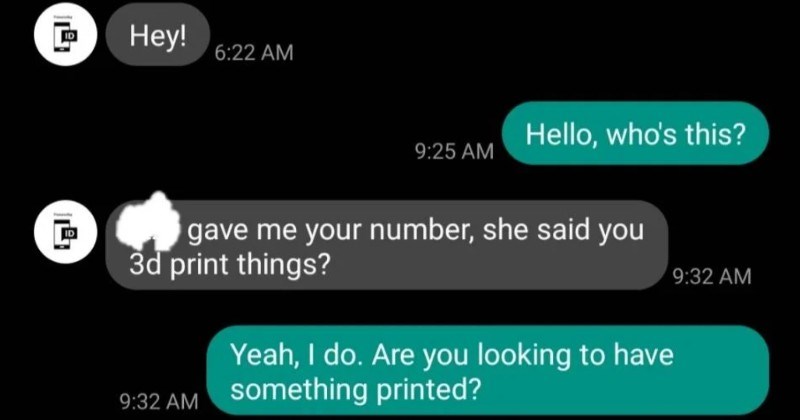 On a strange level it's almost intriguing to witness what kinds of bullish displays of entitlement can present themselves when a wildly irrational choosy beggar is stirring up the pot. Just the way that a choosy beggar goes about rationalizing their lowballing behavior. It's something else, man. This particular choosy beggar was doomed from the very start. Good for the wedding caterer for not getting tripped up for a second, and standing their ground. For some more juicy content involving a wildly entitled human being, check out the time that an entitled customer demanded a salt-free burger, got just that, and pitched a fit. 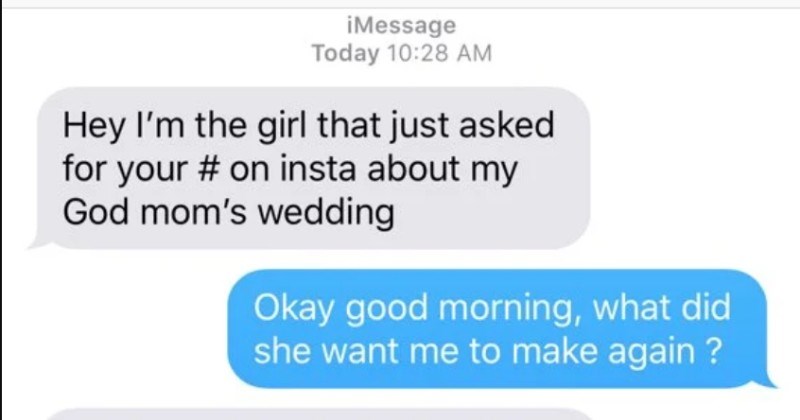 Bachelor Alum, Caila Quinn, left the wild world of TikTok divided after a notably uncomfortable video from her wedding went viral. Basically, Quinn decided that the romantic move was to overwhelm her groom with a display of love by having a flash mob sing Broadway-style songs in the middle of the actual ceremony. Maybe the whole "flash mob" effort would've panned out better if Quinn had opted to bring on more than four "disguised" singers. It seems like the sheer lack of volume when it comes to the singers just adds to the cringe.

And the wedding drama just continues. Honestly, it's endless. There's always an emotional implosion lying in wait around the corner when there's a wedding on the horizon. It could be a nasty bridezilla or even mother-in-law who insists on being the waking nightmare of the day. In this case though, we have a bit of a testy situation that arises over the maid of honor's husband not being invited to the wedding. 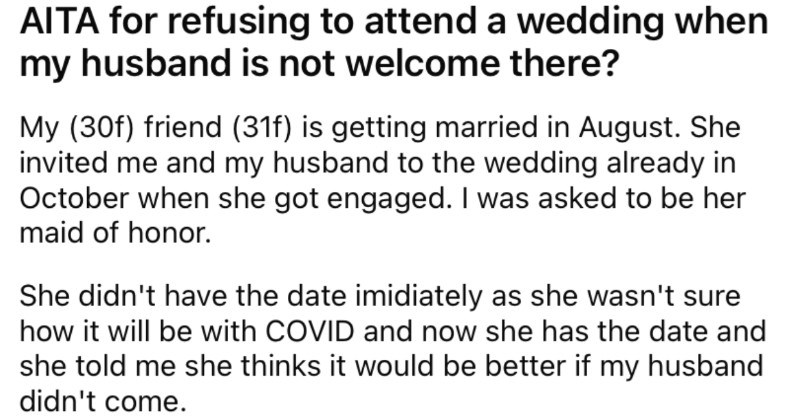 Perfectly Timed Photos That Got It Just Right

There's just no way of knowing if you'll snap a perfectly timed photo, and that's the beauty of it. That rare moment of a terrified child falling off a bike, an overconfident basset hound slipping on some ice, or smiling guy on a pier about to get smacked with a seagull are all wonderful moments of rare chance. Perfectly timed and well angled photos remind us of the stupid luck that goes into rare moments. 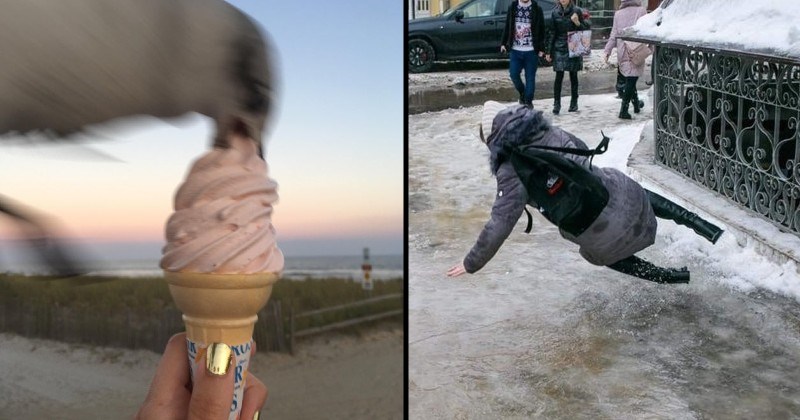 Man, talk about a glaringly obvious attention to steal the limelight. It's your best friend's big day. This whole rodeo really only rolls around once. But as it does, you're going to have the audacity to try and make the day about you? Nope get out of here. For more juicy wedding drama check out the most entitled bridezillas of 2020 over here. 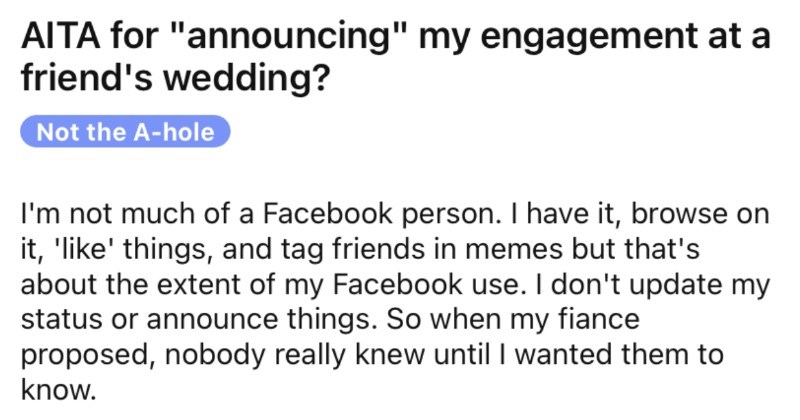 Someone on AskReddit got a thread going about the funniest things that people have ever witnessed at weddings. Weddings are a magnet for people acting out in all kinds of hysterical, inappropriate, and entirely unexpected ways. It could be all the nervous energy that pours into the big day, or the fact that you end up bringing together various family members that should otherwise never find themselves in the same room with each other. 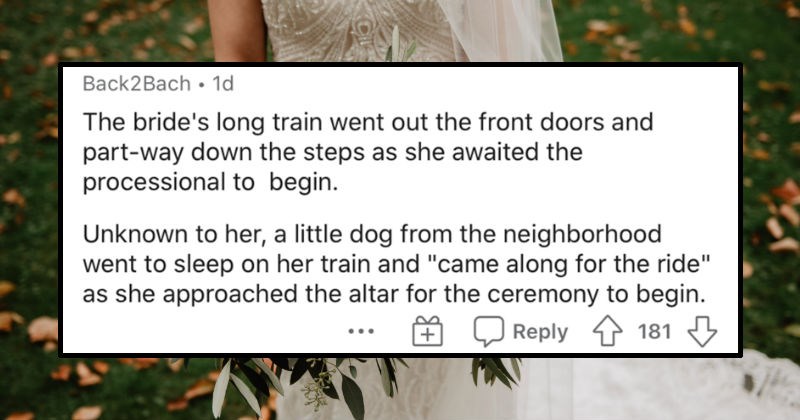 Someone on AskReddit got a thread going about the biggest red flags that people ever picked out at weddings. Sometimes, you just end up attending a wedding that might be decently loving, but there's still that eerie sense that something isn't right. Hopefully none of these red flags ring a bell. 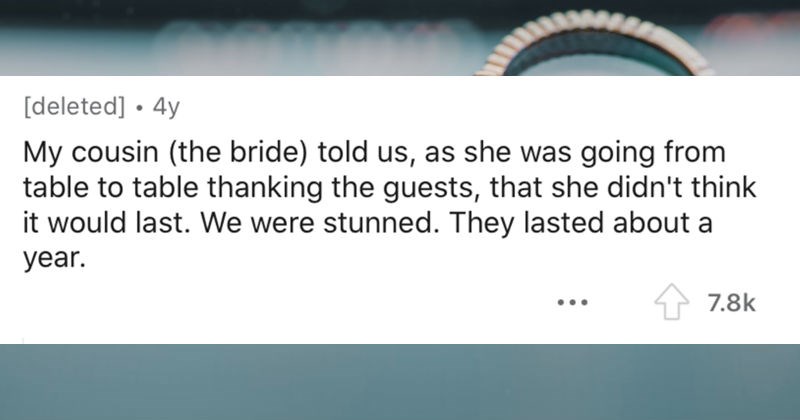 What better way to show your everlasting love than a quick photo edit of you in your beloved's pocket, or kissing on a swan? We don't know why this is a trend, nor do we care, but we do like to see the commitment to the craft. For another creative use of photoshop here's a guy trolling a scammer with his photoshop skills. 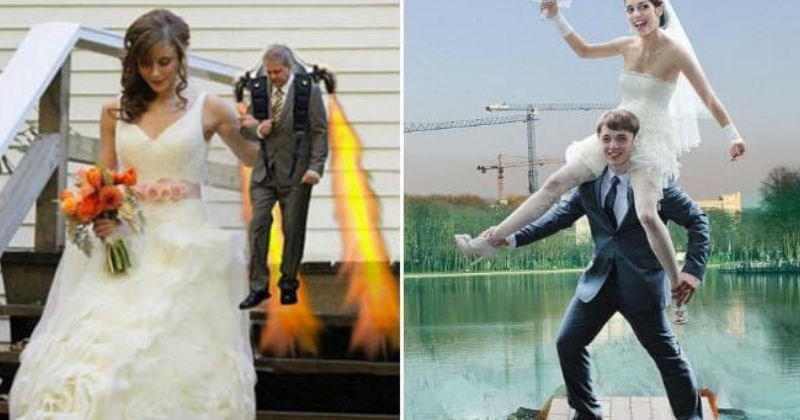 This enraged bridezilla had a bit of a meltdown over a case of bad weather. She went so far as to uninvite the guests to the actual wedding, who missed her bridal shower, due to a severe snowstorm. Someone needs to take a minute and calm the hell down! 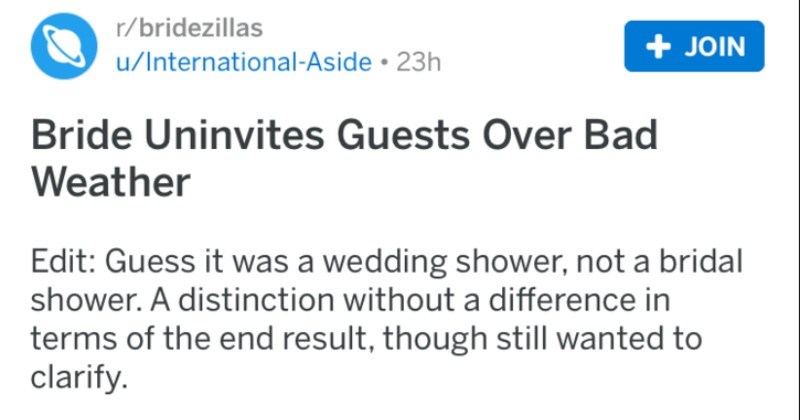 With wedding season in motion, the bridezillas are really coming out of the woodwork. There's just something about the grand occasion, the heightened emotions, the perfectionists running amok, and the overall high stress-high pressure environment that makes for a ripe time of emotional explosions and people acting all kinds of nasty. Hopefully none of these remind you of any of your potential experiences with weddings. 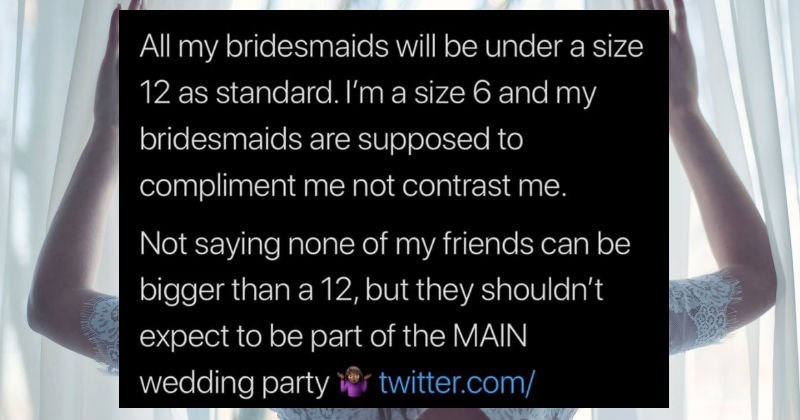 After Twitter User 's picture of her mother in law showing up to her wedding in a wedding dress of her own went viral, she went ahead and explained the background on how such a ridiculous moment happened. The forgiveness involved isn't surprised when you know the details behind the mother in law. Man, with wedding season in full bloom we're getting all kinds of wild wedding fails.

If you're looking for more juicy wedding content, we recommend checking out the recent story on a toxic bridezilla who wanted to boot the maid of honor because she gained baby weight. 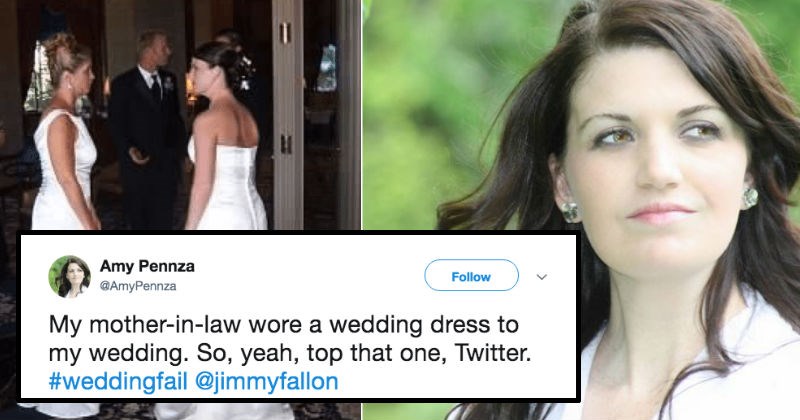 Is this real life? Bridezilla in this scenario is caught up telling her maid of honor that she'd rather not have her around for the wedding cause she gained some BABY WEIGHT. You've got to be kidding me. Baby weight? Get out of here! It seems like with wedding season in bloom, the bridezillas are coming out in full force.

We just got finished running a piece on an appallingly entitled bride who invited a stranger cause she had a reputation for having great gifts, and then made it even worse. 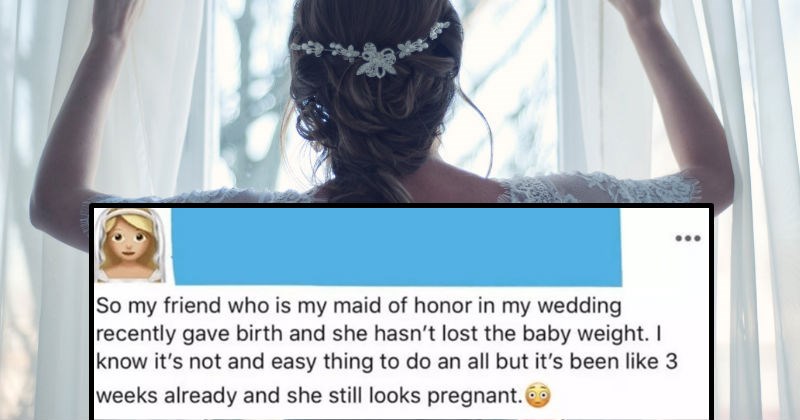 These wedding guests could see the red flags waving bright and bold at particular weddings that seemed destined for doom. Sometimes things just don't work out, or everyone around the couple knew all along that the two individuals coming together to tie the knot, should've been doing anything but that. If you're looking for more juicy wedding drama we recommend checking out our recent post on a groom's mom crashing the wedding in a wedding dress of her own.

If you're still looking for more wedding fails, check out 30 wedding tweets and memes that'll exhaust you for wedding season. 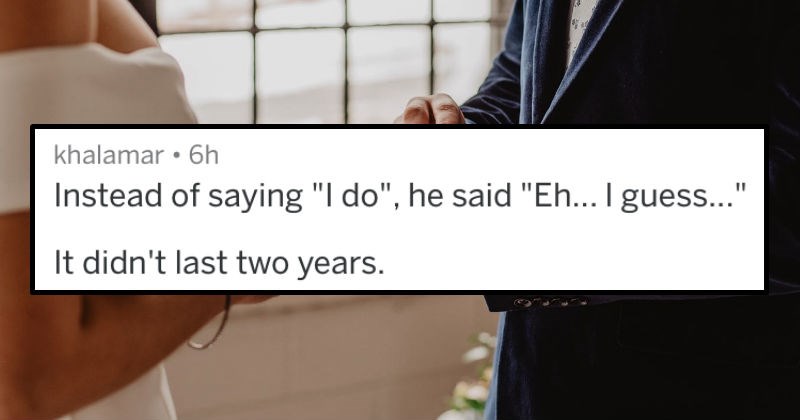 Don't go announcing your engagement at someone else's wedding or this just might happen to you. The self-important bridezilla in this scenario went and announced her wedding while she was attending her friend's! From there, the revenge was cold-hearted and plain old brutal. I'm just trying to figure out why people that hate each other this much remain friends. There doesn't seem to be a whole lot of love going on between these two friends.

Check out these marriage memes if you're looking for a nice summary of what to expect after the wedding. 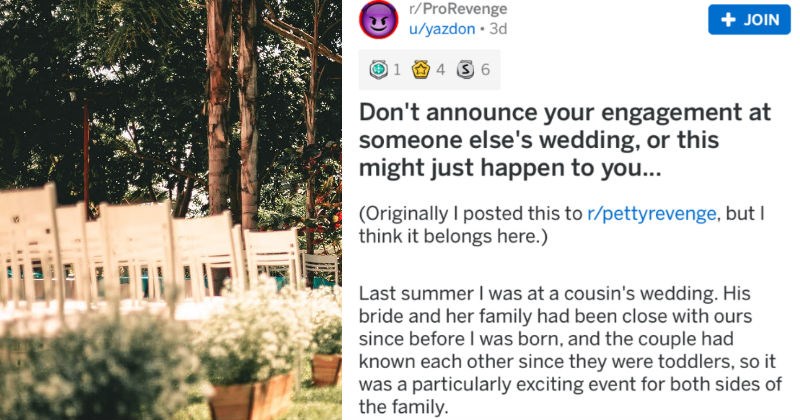 14 People Reveal The Rudest Dates They've Ever Lived Down

These people experienced some truly nightmarish dates! Hopefully things have picked up for them on their romantic exploits... 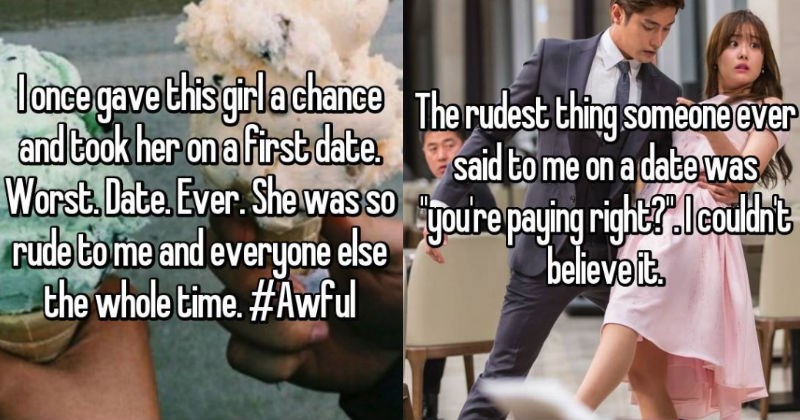 Mildly Infuriating Images That Grind All The Gears