Guy Panics, Fakes British Accent, Follows Him Around For 12 Years

Kids can be very mean. So, it's understandable that this dude went into survival mode and faked an accent just to try to steer clear of being bullied. With that being said, it's especially hilarious that he had to maintain the fake British accent for so dang long. I say, just keep it going, man. Really double down on refining that accent so that it's completely unrecognizable from the real thing. 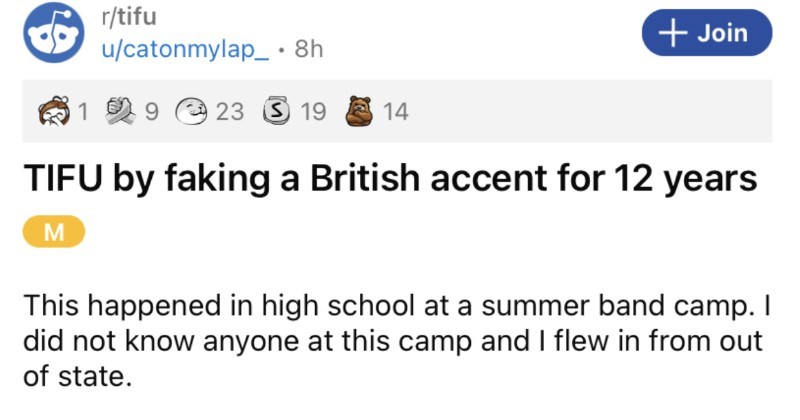 Twitter Thread: What Every State Is Famous For, According to a Brit

It can be a real wakeup call to hear what a total stranger thinks of the place you and your family have lived their whole lives. For all you know, every person you live with, work with, know and love could be summed up in someone's brain as "the place with all the corn." Depending on where you live, your culture might measure space and time differently than someone else. Here are some non-americans' biggest culture shocks they felt when visiting. 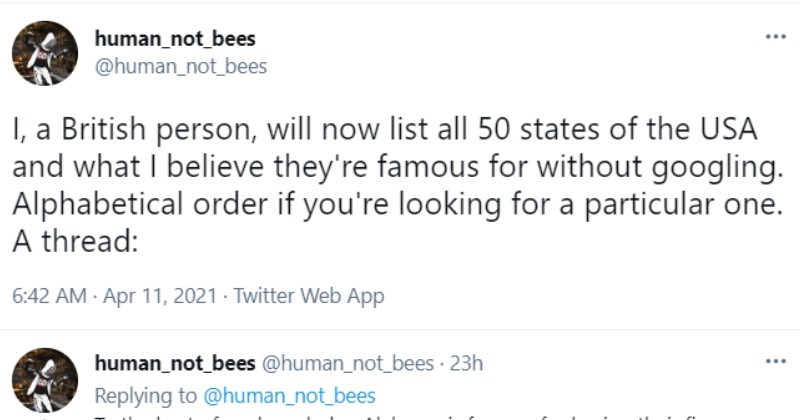 We love a good old fashioned Twitter that manages to culture us a little bit on some of the strange things that occur over in a foreign land like the U.K. For instance, apparently British people call their fanciest private schools public schools, which kind of makes zero sense. But hey, to each their own. For some more worldly content check out this AskReddit thread about Americans' biggest culture shocks when visiting Europe. 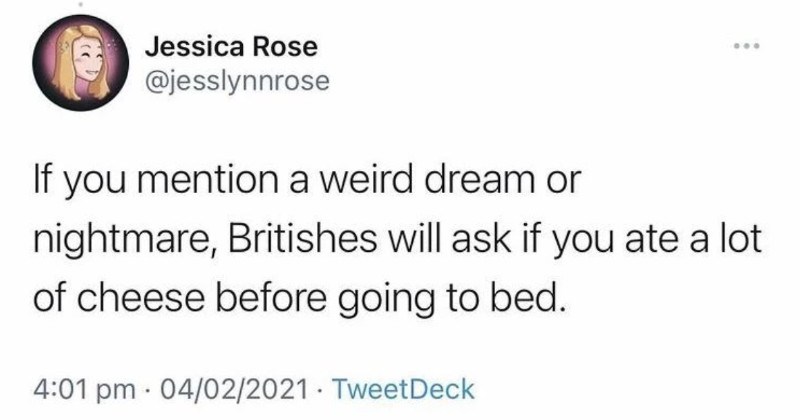 Just when Joe Wilkinson thought that he might've had it all, he gets the glory stripped clean. If only Joe had had a little bit more spacial awareness he might've pulled off that potato throw as the rules asked for.

Maybe you didn't wake up today thinking that you'd find yourself watching a video of how to build a fire that only you can see, but here you are. The guy provides some lively commentary as well.

We always love a little good old cultures clash on Tumblr. So, comparing Hershey's chocolate to any chocolate sold back in England is a grave, mortal sin. Duly noted. Also, that whole bit about how the Brits call it "maths" while Americans call it math was a trip. If you enjoyed these funny Tumblr moments, check out this Twitter thread where cultures clash over canned chicken. 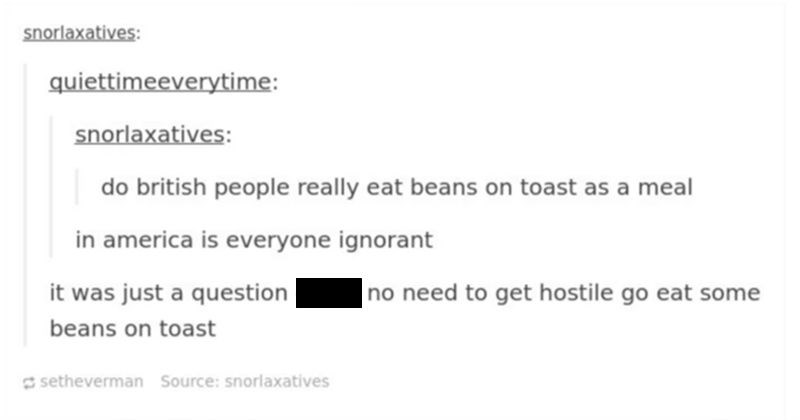 Today might be the day that you realize you've been British all along. We always get a kick out this Twitter account that's dedicated to describing those "uniquely' British problems. 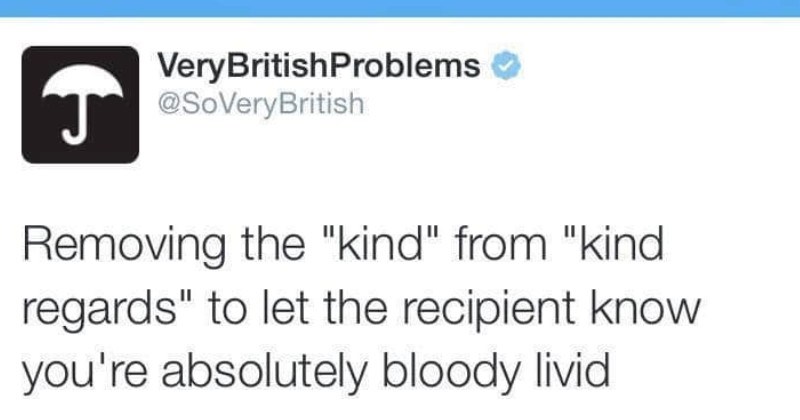 Brit Living In Italy Talks Some Sense About Coronavirus

Coronavirus has inspired all kinds of irrational responses hatched from a place of pure and senseless hysteria. Some folks are trying to spread the logic and the facts amidst the storm of otherwise confusing and conflicting information. This British woman living in Italy, decided to share a Facebook post about what life looks like while living in a place that's on lockdown. 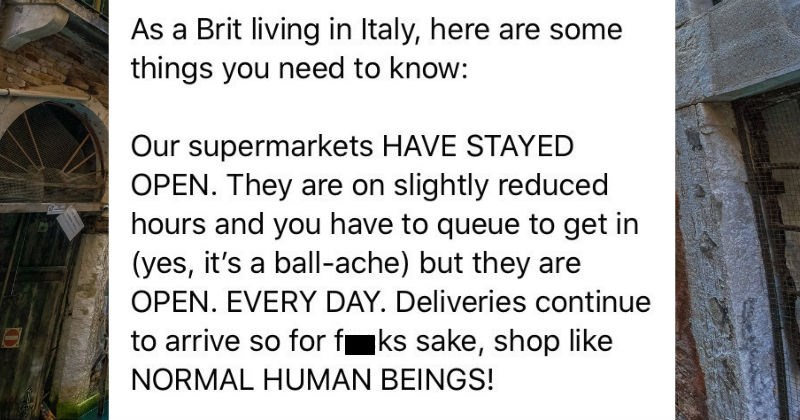 Drunk British Lad Gets Lost In Vegas, Cops Help Him

Via The Way I See Liverpool
Repost
Recaption

This drunk and lost British lad managed to be so damn likable that the cops even helped him out. He did seem to create quite a bit of an atmosphere there.

British People Asked How Much US Healthcare Costs

There was a problem rendering this video - it may have been deleted.
Via @ioanmarcjones
Repost
Recaption

British people were asked how much they think US healthcare costs. Their guesses were wildly low, and the video ends up serving as a disheartening testament to the insanity of some of the healthcare costs in the US.

Non British People Share What They Find Odd About Britain

In a recent AskReddit thread non-British people are sharing all the things that they find odd about Britain. Things like when British people want to be really mean, they'll just proceed to be very polite to you. Now that's just unnerving. Or, on a more positive note; if a Brit invites you for a drink they very well might be talking about 10 drinks and a kebab. 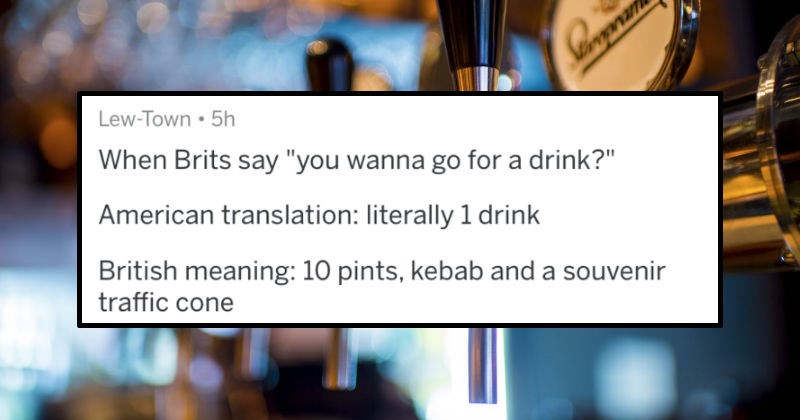 Yasmin Summan asked Twitter if her local American Food Aisle was accurate and Americans had questions of their own. Most notably, has anyone in the U.S. every seen a hot dog in a jar? It just seems...wrong. No wonder the world seems to have a low opinion of the American diet. For some more culture clash, here are some cultural habits of the UK that are just fascinating. 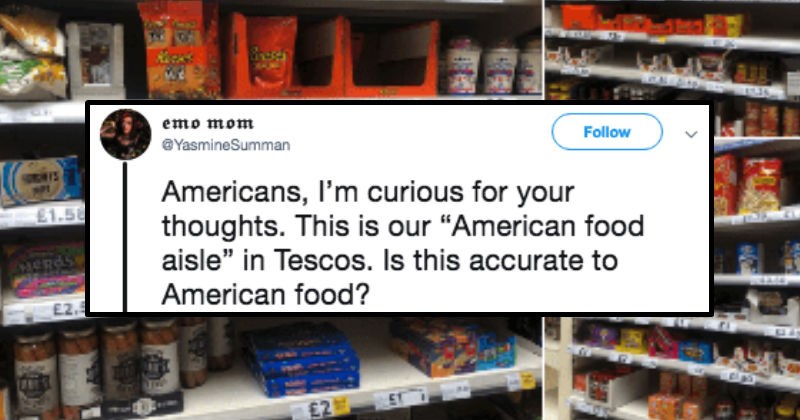 People in the UK just do it different. That insult humor is a real kicker. Or maybe you fancied a nice snooze in the alleyway while wearing your nicest suit? I mean, that's quite the ridiculous and entertaining image. A bunch of Brits slamming pints at the local pub in their nicest three piece suits, before they roll into Blackout Station. That's obviously the wilder side of things out there, but still. Got a laugh out of us! 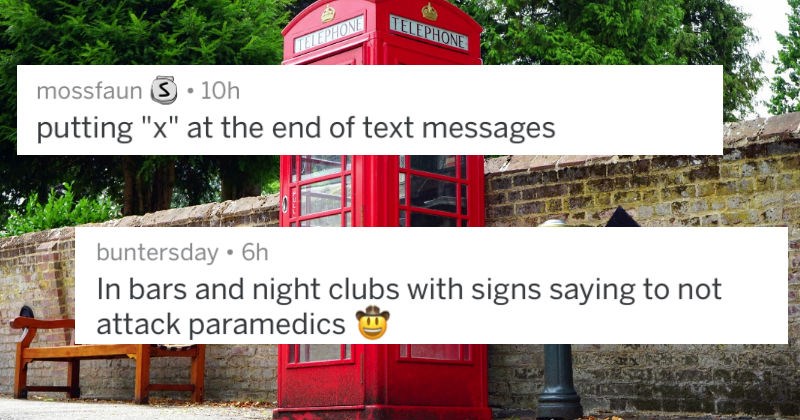 This is the final boss. She is maxed out on her stubborn levels.

These distinguished, tea-soaked tweets are brimming with the tasty tidbits of British culture that can at times, seem so different from the rest of the world. You might find yourself chewing on an idea in the back of your head halfway through this list, to make some power moves to the nearest pub to drink down your afternoon with a steady procession of pint glasses in hand. 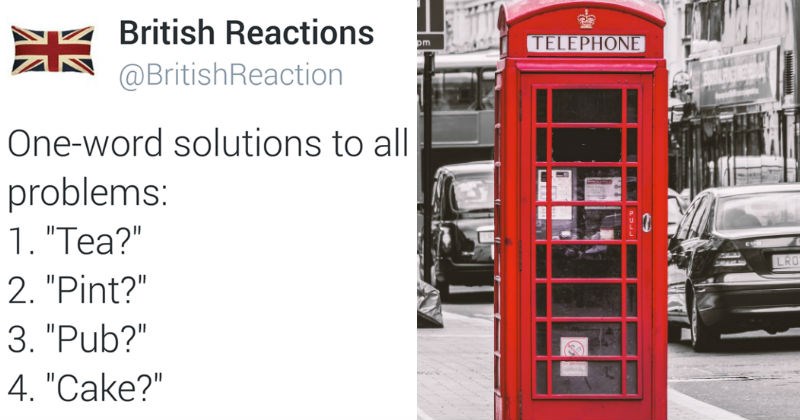 "Can you tell me what road I"m on ?" Uh, Sir, you can't park there. This has to be the most lovably British exchange I've ever seen! Why is this so precious and wonderful? I don't know; could be the accents.