I'm not sure the video killed the radio guy, but it certainly makes for an entertaining topic of discussion, or even a musical classic. If you've ever wondered what would be the result if you just search for video, you won't be disappointed, but maybe try adding a second word to the phrase, you might find what you're looking for.

App of the Day: This Cool Häagen-Dazs Ice Cream App is Useless but Awesome

The Pros and Cons of Ello, the Ad-Free Minimalist Social Network

If Jesus Had a Mobile Phone

Via 2BE
Repost
Recaption

This is the Perfect Music Video for That Selfie-Obsessed Acquaintance

Via The Jump Off
Repost
Recaption

Or, you know, a wakeup call for yourself. We're not judging here.

A Poem for the Internet-Obsessed

The clip above aired Thursday night on The Daily Show, a relatively innocuous joke about the fanaticism of a vocal group of fans of the boy band. Fans, however, took it as an insult against One Direction member Zayn Malik - who is of Pakistani descent. By Friday, angry fans had hashtags globally trending on Twitter: 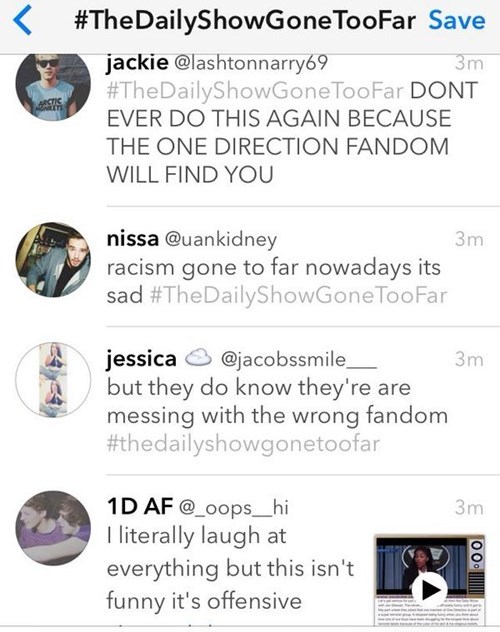 Not seen here? #ZaynDefenseSquad, #ZayneSavesNotKills, and other smaller hashtags throughout the day - which our friends at Know Your Meme have kindly gathered up! Meanwhile, the Washington Post reports that over 114,000 tweets have been tallied under the popular hashtags.
The moral of the story, as always, is to never underestimate the power of teenage girls on social media.

Every Thought About Letting Someone Else Fix Your Twitter Bio?

Jerry Seinfeld Predicts Facebook Back in the Early 90s

All the Things We Hate About Youtube in Five Minutes