There, I Fixed It Channels 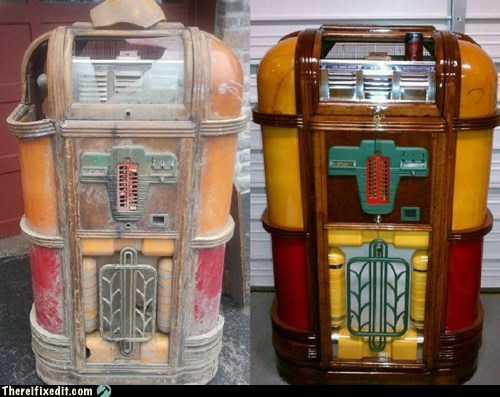 Here we see a jukebox just like the ones the Fonz used to smack (plus a few more decades back). Unfortunately, many antique collectors can get rather miffed when items don't have their original varnish/presentation, which is beyond me, because this thing looks like it fell right out of the corner of a malt shop. Rock on! 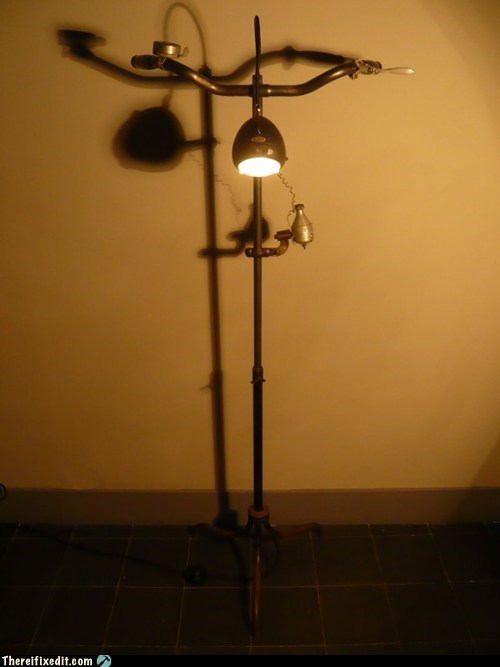 Here we see a nice little floor lamp made from old bicycle parts. Be sure to lock it up or someone might steal it!

Halloween is here already, but if you want to get an early start on next year's festivities, here's where the bar is set. Judging by this guy's costume, it's set pretty high (14 feet high, to be precise!).

TIFI WIN: Astronauts Fix a Critical Power Unit on the International Space Station With a Toothbrush 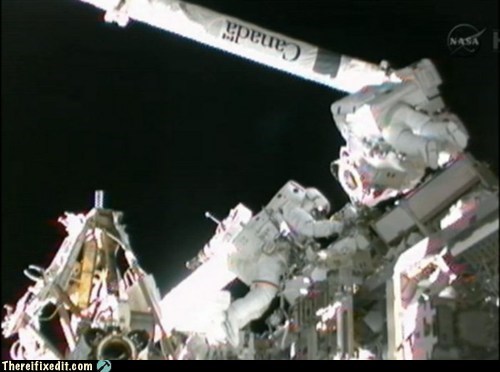 Move over, duct tape, because it's toothbrush's time to shine! Astronauts Sunita Williams and Akihiko Hoshide were having a trouble getting a bolt repaired on the Main Bus Switching Unit (MBSU) of the International Space Station during an 8-hour spacewalk on August 30.

The MBSU is part of the station's framework designed to control the movement of external stowage platforms which house spare parts and equipment. Frustrated with the unit's lack of cooperation, the astronauts turned to a rather unconventional set of tools. As Space.com describes:

"One was a modified toothbrush that was used to lubricate the inside of the bolt's housing after debris and metal shavings from inside had been removed. Another improvised instrument included a cleaning tool that had been made from wires that were bent back to form a brush, explained Keith Johnson, lead spacewalk director at the Johnson Space Center."

Just goes to show you that sometimes the best fix is the simplest! Occam's Toothbrush, anyone?
Comments
There, I Fixed It
Favorite

I Don't Care if the Olympics Are Over, I'm Still Giving This Person a Medal!

No more of this:

This bad boy has the split chassis of a Chevrolet S-10 pickup truck, and can go up to 65 miles per hour. Not to mention the sweet farm animals designs on the dashboard!

TIFI WIN: French Man Stranded in the Moroccan Desert Remodels His Own Car Into a Motorcycle, Becomes Eternal Badass

By Haunebu (Via The Daily Mail)
Repost
Recaption

Meet a man sure to go down in the Kludging Hall of Fame. In 1993, Emile Leray, a French electrician, was driving through the Moroccan desert when his Citroën car broke down.

Stranded in the desert, and far out of walking distance of civilization, Leray pulled up his bootstraps, made a small offering prayer to MacGyver (allegedly), and proceeded to disassemble his trashed car and reassemble the parts into a fully functional motorcycle.

Leray is quoted as saying:

"I put myself in what one calls survival mode. I could not have gone back on foot - it was too far."

Survival mode paid off big-time, as Leray successfully rode his new motorcycle back to civilization, and out of the clutches of very painful and unfortunate death in the desert. In the end, he journeyed over 20 miles, which may not seem like much, but let me reiterate: try walking 20 miles in the scorching north African desert heat.

Despite making his journey 19 years ago in 1993, he has only recently begun telling his story to the press. Now that is a TIFI WIN of monumental proportions. 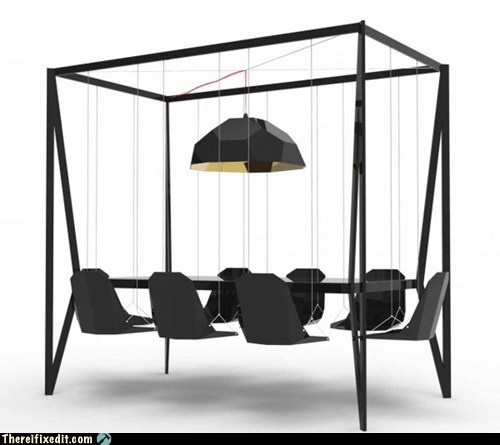 Having trouble getting your family to sit down at the table as one for a nice home-cooked meal? Try this on for size. They won't want dinner to end!

This may come as a shock a lot of people who live in the "first" world, but millions upon millions of people don't have access to washing machines, and still have to wash their clothes by hand.

Doing this makes the washer vulnerable to numerous health conditions such as bacterial infection or repetitive stress injuries. The makers of the GiraDora washer intend to change that.

The washer looks almost like a repurposed water cooler, fitted with a pump on the bottom portion so that users may put their clothes in the washer, sit on top of it, and pump it with their feet. Just further prove that sometimes the best solutions are the simplest ones.