Former White House Press Secretary, Sean Spicer, mistakenly shared a picture on Instagram, of a copy of Charles Dickens' "A Christmas Carol" calling it FDR's book of Christmas carols. Missed the mark just a bit on that one, huh Spicer? 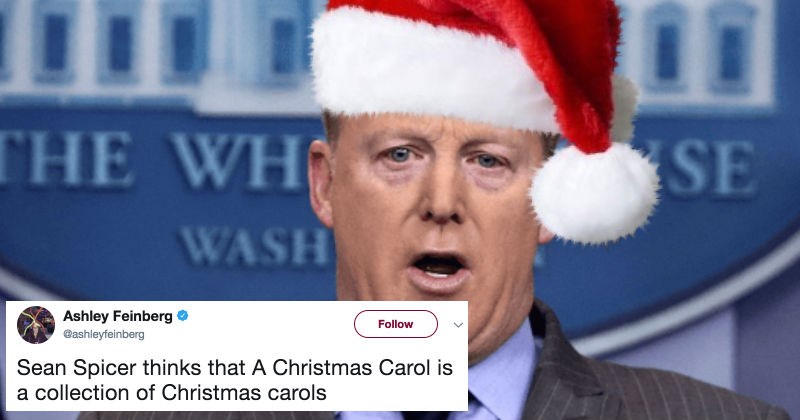 Naturally, by 'hottest' I meant comically absurd, hilarious, an unfortunate reflection of the times we live in. But I mean, hey, heal pain through laughter or something like that, right? Stephen Colbert would seem hellbent at keeping up with that memo. 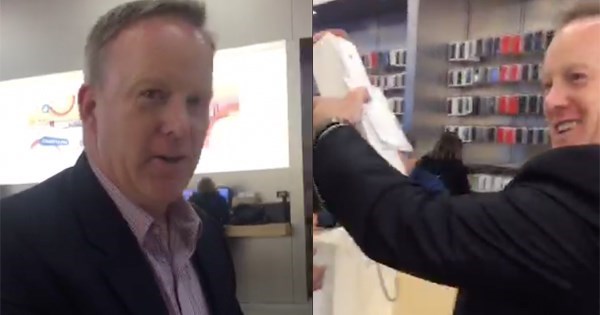 The worst thing you can hear at an Apple Store is "out of warranty." That is unless you're White House Press Secretary and American joke Sean Spicer.

At a Washington, D.C. Apple Store over the weekend, a woman put Spicer through the ringer, hammering with questions about Russia and whether or not knows that he works for a fascist. Then, as is her civic duty, she posted it Twitter.

Asking @PressSec questions in Apple Store since he doesn't like the press. https://t.co/l493z2gG4x

The woman then went on to share some thoughts about running into Mr. Spicey at the store over on Medium. This was the best press conference since that time Sean Spicer pointed to two stacks of papers to prove why the GOP healthcare plan was better than Obamacare.

I just can't get over this argument.

"Look at the size. This is the Democrats. This is us." pic.twitter.com/0lPfRxFvMf

Oh Hell Yeah: Sean Spicer Wrote a Letter to the Editor of His College Newspaper After They Called Him "Sean Sphincter" 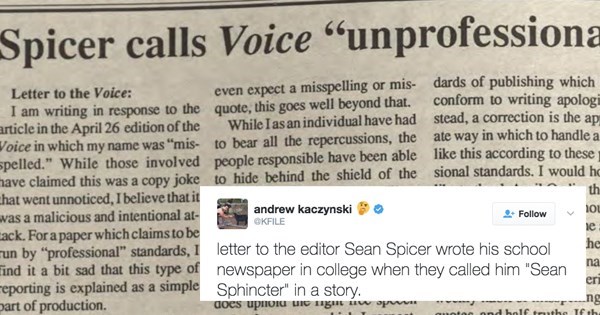 Sean Spicer's war with news media didn't begin at the White House. As a matter of fact, back in the earlier 90s, Sean Spicer was a big man on campus at Connecticut College, who, while taking a break from having a million friends and getting laid all the time, was campaigning to ban smoking in college dorms. But the news didn't take him seriously.

When his college newspaper, the College Voice, reported on his smoking ban, they mistakenly called him "Sean Sphincter" — an easy mistake to make when you're talking about the future most annoying man on your TV.

Because Sphincter, er, I mean Spicer is unable to take anything in stride, he wrote this letter to the editor over one cinnamon gum-filled evening: 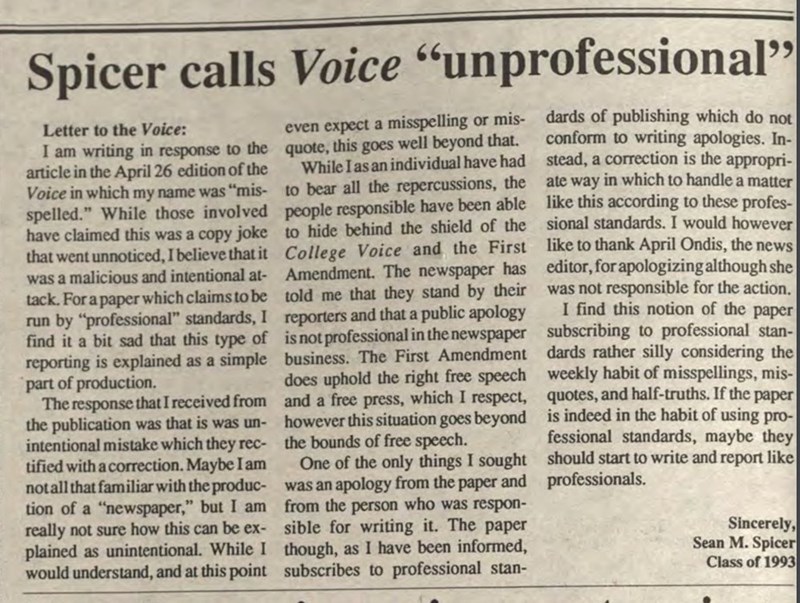 Thanks a lot College Voice. You've created a monster.

From the editor of the College Voice to Dippin' Dots to Daft Punk, the message is clear: Stay on Spicer's nice list.

Again, I Can't Be Any Clearer: Trump Should Fire Sean Spicer and Hire Melissa McCarthy

She came here to chew gum and kick ass, and she's, well, gonna do both.

On SNL last week, Melissa McCarthy went full ham on the gum chewin', dippin' dottin' White House Press Secretary Sean Spicer. While he was a pretty good sport about it, Trump was not. He didn't like his man Spice being played by lady. Sad!

So what did she do, McCarthy came back for another round of questions, and she brought with her a big stick of gum and a motorized podium. A message to that reality-TV gameshow host who spent the weekend playing golf, hire this woman. She's strong like bull.

Don't Know Your ABCs? Allow Sean Spicer and His Tenuous Grasp of the English Language to Help with Sean Spicer's Alternative ABCs

What did we do to deserve Sean Spicer? For Fail Blog, he has provided us with an unending stream of hilarious content as he carries forth the words of a man who is very concerned about his own bathrobe ownership.

But what's really great about Spicer is not his love of cinnamon-flavored gum or his obsession with Dippin' Dots. No, it is his inability to read a prepared statement without getting lost in a sea of letters.

With that in mind, GQ has put together a video of some of Mr. Spicer's greatest mispronounciations. Hits include:

And your favorite and mine: 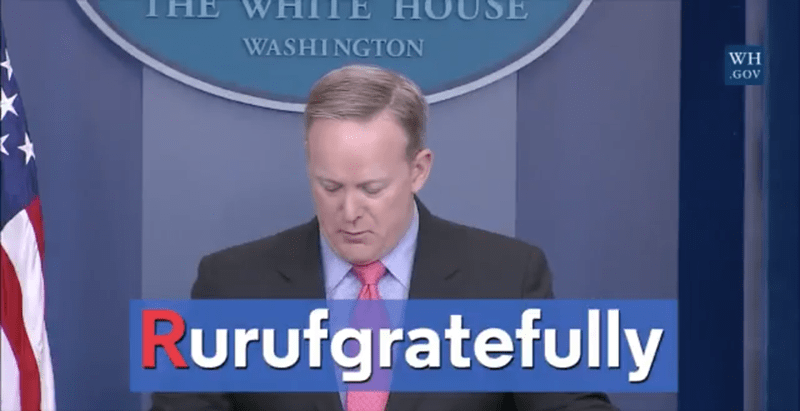 Following President Trump’s tweetstorm about how the free press, voters who participate in polls, and federal judges are all pretty much fake, that reality-TV gameshow host that the media was under-reporting terror a ttacks because “they have their reasons.” When the media asked for proof, the White House released a list of 70 allegedly under-reported terror attacks, despite most of them receiving some to heavy press coverage. For example, San Bernardino was on the list — though it was spelled wrong.

Also on the list 22 times was the word “attaker," which, as a quick Google search will show, is not how you spell “attacker.” Ignoring red squiggly line after red squiggly line on their word processor, the White House released their statement filled with spelling errors. Luckily, Merriam-Webster’s Twitter account to make everything great again.

However, with the limitations of the 24-hour news cycle it’s hard to get all the Sean Spicer we want, nay, need. So someone, thankfully, started the twitter account @SeanSpicerFacts, which is home to dozens of fake and hilarious Alternative Facts. Check out the best ones:

Via The Onion
Repost
Recaption

Over the weekend, probably as he was Googling his own name and looking for something, anything complimentary about him, Sean Spicer found a video that he thought “Nailed it!” It’s just a shame that that video came from The Onion, the world leader in joke news.

Spicer found a tweet by The Onion, who were promoting their video "5 Things to Know About Sean Spicer" touting Spicer’s ability to communicate the Trump administration’s “misinformation.” He quickly retweeted and added the comment “You nailed it. Period!” 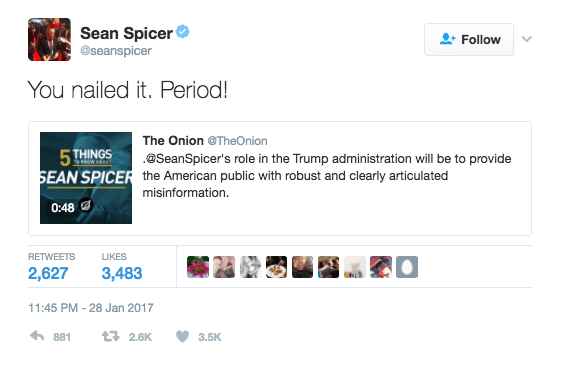 One can only imagine him lying in his lazy boy recliner, mouth open, and Doritos dust covering his chest as came across the tweet that claimed he was lying to the American People. He might’ve brushed that Doritos dust off his chest before RT’ing in agreement. Or maybe he didn’t change positions.

However, one thing’s for sure, if you were wondering about Trump administration’s ability to parse out real news from “fake news,” you have your answer: The White House press secretary aka one of the most important media guys in America thought The Onion was real.