This lying cheapskate didn't know what he was getting into when he asked for free dancers to shoot a music video. Rather than letting people get manipulated for no money, this person let the guy know that he was full of BS. For more rude people who wanted free stuff, here are some entitled folks who need to leave and take their attitudes with them. 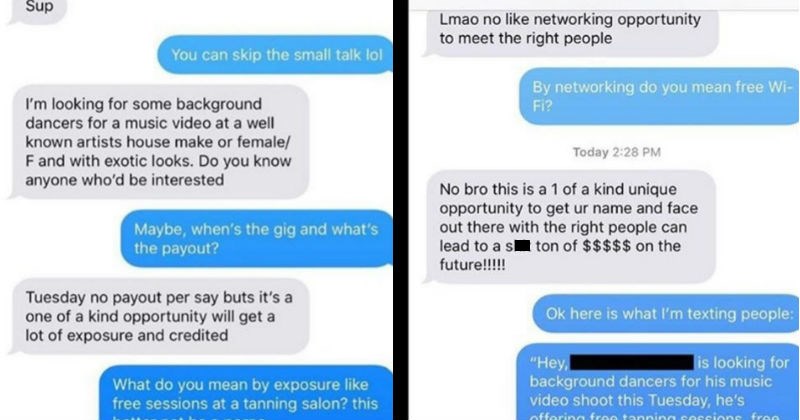 It's videos like this that make us genuinely appreciative to have the internet around. What would've otherwise just been an insane voicemail from a dude's rambling brother has been transformed into nothing short of modern day art.

Eminem's "Without Me" Entirely In Klingon

This is what the internet is for.

Now that's how you show love for your favorite bakery.

These guys spent a lot of time and energy, including making a song, to hype the crap out of their snowskating cat. It's refreshing to see so much effort be put into such a specific thing. It makes sense, when you have such raw talent on your hands in the form of a cat, you know you've gotta go for it.

Here's how to serve Wendy's hot drinks in glorious 80s pop music fashion. Frankly it's just too much, but personally we feel extremely informed on how to serve coffee now.

Insys Pharmaceuticals is out here serving up some FIRE bars of cringe. Apparently this video was actually brought to the jury in a case where they were charged with creating a kickback scheme for physicians who prescribed the drug. Get out of here with this!

Soundcloud Rapper Sheck Wes decided to not pay for a music video after shooting the whole thing, so the company who made it released their own version. Needless to say, the result was less than flattering. Hey, at least they eventually got to use all that footage, right?

Finland does NOT mess around when it comes to advertising their cough drops.

After Losing a Fantasy Football Bet, So This College Student Made the Best Cassie ‘Me & U’ Video

Honestly watching this parody video through was  pretty much the best 4 minutes of my day today.

Young Thug Never Showed Up for His Video Shoot, So The Director Made The Video Without Him and It’s Amazing

Rapper Young Thug wanted a lot of cool things in his video: Girls in bikinis, little kids smashing a cop car with Super Soakers, Power Wheels, and, of course, the man himself eating Cheetos. The one thing, apparently, he didn’t want was to show up.

The new Young Thug video explains what happened one fateful when Ryan Staake, the co-director of Young Thug’s video for "Wyclef Jean," realized his co-director, Young Thug, wasn’t going to show up for the shoot. Despite being told that the rapper was on his way, Staake powered through, shooting the girls riding the Power Wheels, Young Thug’s own son destroying a cop car in front of real cops, and two girls, one Kielbasa. He also intercuts the video with audio clips of Young Thug describing what he wanted in the video. It’s amazing.

Now, it’s worth noting that this might eb all part of the video conception. It was, afterall, released by Young Thug. But fake or not, it’s a really cool idea for a music video that doesn’t make the performer look too great.

Just think of what could've been:

Getting Tipsy on the Roads

Via Tegan and Sara
Repost
Recaption

This pup-tastic music video was directed by Jess Rona, who's pretty well known for her slow motion dog grooming videos on Instagram.

Sharon Stone Was Having Trouble Finding Quality Dates, so She Decided to Make a Music Video with James Corden

I'm Not Sure Whether to Cringe at This Guy's Video or His Predicament, But His Jeep is a Lemon and He Made a Song About It

In 2013, Teg Sethi bought himself a brand new Jeep Grand Cherokee for $60,000, and it's given him nothing but trouble ever since. After numerous breakdowns and no help from his local Jeep dealership, Sethi felt like he only had one option left: writing a song about it.

Beware: as cringe-inducing as this video is, it's also weirdly catchy and may end up stuck in your head all day.