There's Girl Scout Cookie Thin Mint Beer Now, So Excuse Me While I Barf Into a Bucket As I Type This Article

For whatever reason, advertisers and men with beards have convinced us that the worse a beer tastes, the better it is. The rise of the IPA has killed the refreshing beer and has replaced it with a sticky mouth feel that people force down in hopes of "having taste." Not to be outdone by the idea that bitterness is good, one brewer is adding two really stupid ingredients to a beer: mint and chocolate.

According to Food and Wine, New York's South Tier brewery is making a Girl Scout Cookie-flavored beer because everything has to be a gimmick. Marketed as a Thin Mint Stout, "Thick Mint" finally cuts out the middle man of drinking a beer while housing a box of Thin Mints because everyone likes chewing gum and drinking beer.

And here it is: 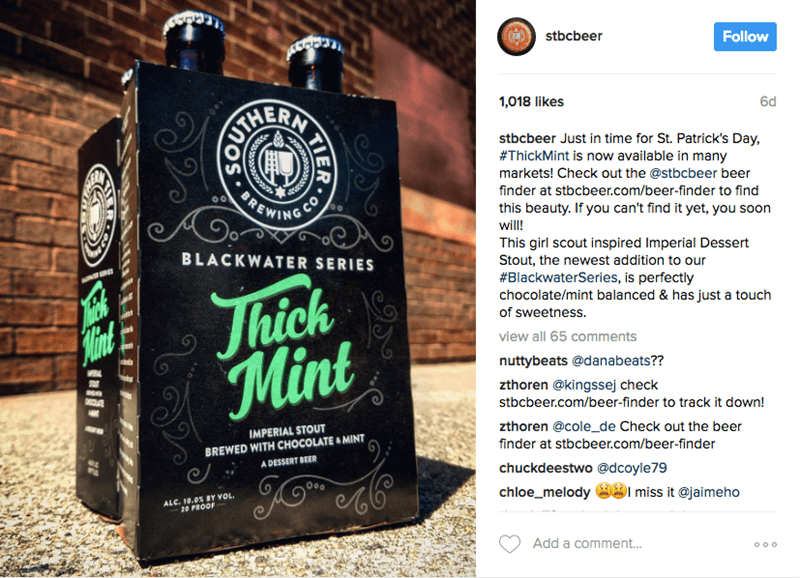 Look, not everyhting has to taste like something crazy. I know beverage makers are on this neverending quest to make drinks taste like food, but you know most of us want beer to taste like? Beer. We want a beer that tastes like a beer, not a York Peppermint Patty. Goddammit.

Now if you'll excuse me:

She Saw Where There Would Be a High Demand For Cookies 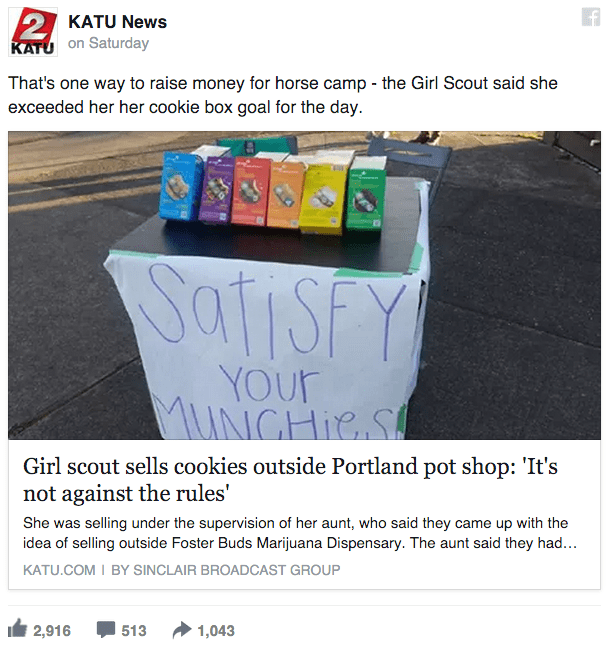 We Will Not Settle for Tagalongs in This House 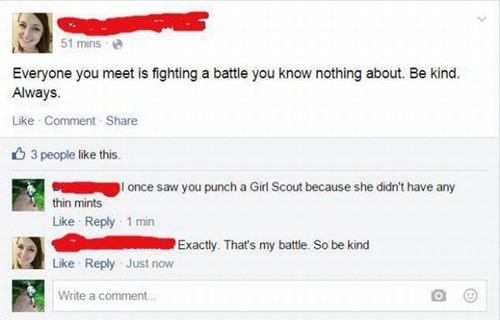 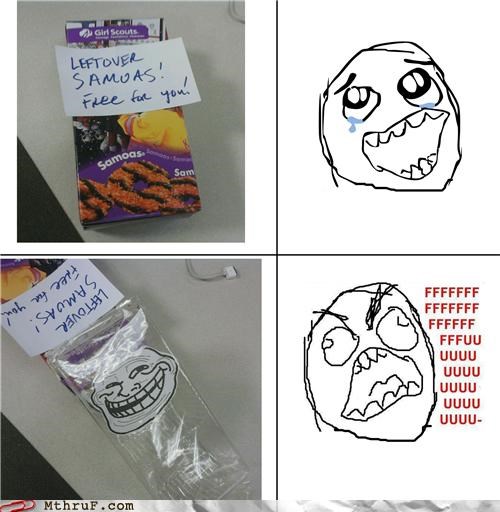 Give Me ALL the Thin Mints. ALL OF THEM. 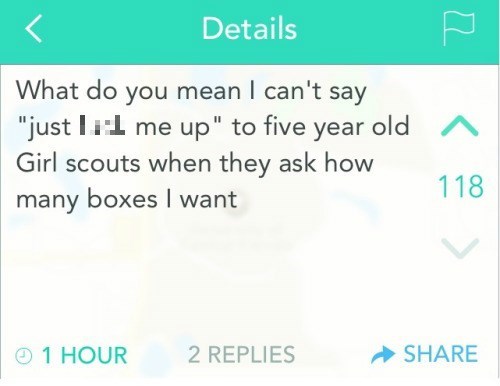 Bring Your Girl Scouts to This House! 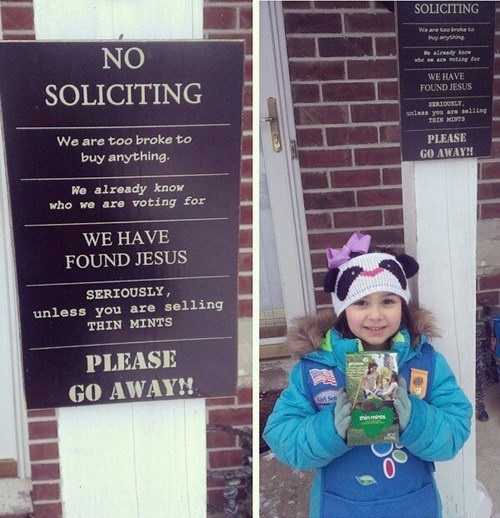 Via Daily Picks and Flicks
Repost
Recaption
Comments
After 12
Favorite 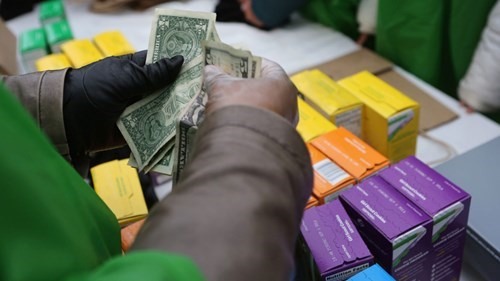 Looking to drum up some new business, 13-year-old Girl Scout Danielle Lei and her mom set out for a San Francisco medical marijuana clinic on Monday, armed with boxes of Tagalongs, Dulce de Leches and other cookie varieties she and other scouts sell annually.

Any patients at The Green Cross with the munchies didn't stand a chance. In two hours on President's Day, Danielle sold 117 boxes outside the clinic — people gobbled up all her Dulce de Leches and blazed through the Tagalongs. According to her mother, Carol, that's 37 more boxes than what she sold during the same two-hour period outside a small Safeway the next day. 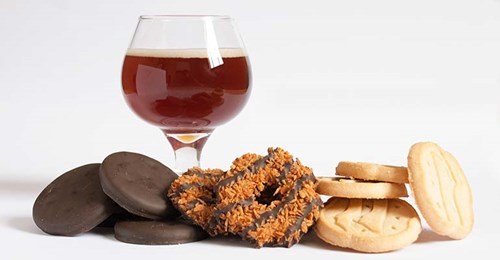 Samoas.
• A crisp cookie coated in caramel, sprinkled with toasted coconut and striped with a dark chocolate coating.
• Paired best with a red dessert wine such as a Port, or an 8.5 percent ABV heavy ale, like a Founders Dirty Bastard.

Tagalongs.
• A crispy cookie layered with peanut butter and covered in chocolate.
• Paired best with a fruity red wine such as a Zinfandel, or some sort of Belgian ale, like a Duvel Belgian Golden Ale. 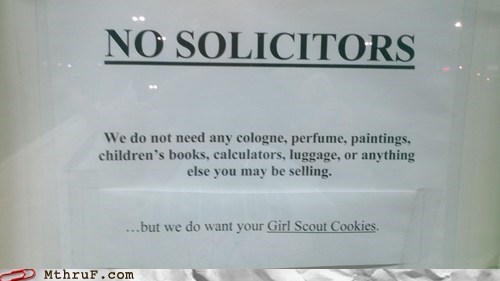 From the submitter: "No one can say no to Samoas."

And by that you mean TAGALONGS, RIGHT? 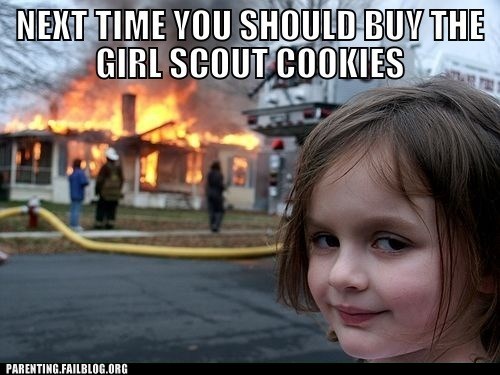 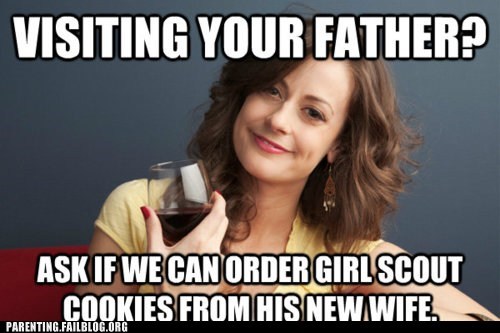 Also Works With His Holiness, The Samoa