Dating can be an equally rewarding and wildly disorienting experience. With the wealth of dating apps available at your disposal, and all the silly nonsense that such apps can drum up, it can be just a bit intimidating when you're trying to figure out where to even start. And then, when you eventually muster up the courage to forge your handy dating profile, and begin swiping away on fellow human beings that suit your fancy, you realize just how hard it is to strike up a meaningful connection in a sea of people that might just be using the app for fun, and nothing more. Suffice to say, it can be a discouraging and draining process. You're absolutely not alone if you're prone to installing and then deleting the app, and then installing it again. A strange cycle for sure, but one that many folks can get caught up in. I mean, who really wants to deal with a relentless wave of shamelessly cheesy pickup lines all the time? Everyone has their breaking point.

Maybe you actually ended up deleting those dating apps and meeting someone out in this crazy world that you genuinely enjoy being around. Such a life development can occur when you least expect it, but when it does, it falls on all of us to handle the situation with as much mindfulness as we can put together. It'd be nice if navigating the whole realm of dating came with some kind of instruction manual, but we're not so lucky. Thus, many of us can fall into relationships that never realize their full potential. Like there's always some mysterious piece missing to complete the puzzle and tie the whole dynamic together.

The last thing you want to find yourself dealing with is an emotionally tumultuous, toxic relationship that only ends up bringing out the worst in you and your partner. Love is a crazy thing in that regard. Loving someone can manage to effortlessly amplify all of your emotions in such a way that you end up being dragged along by them, and make a mess along the way. It's okay though. We've got some awesome human beings on this planet that are dedicated to sharing the hard earned wisdom that they've picked up on their own journeys. In this case, we're talking about an AskReddit thread that has people describing the most common mistakes that folks make during relationships.

If anything a thread like this can serve as a helpful instruction manual on what not to do if you want to live a more peaceful, even happier life. Some examples from the thread are things like the mistake that folks make in terms of not actively listening to one another, taking each other for granted, or avoiding glaring problems that are ruining the relationship. That last one can impact a lot of folks. When you're head over heels for someone, blinded by the rose-colored glasses, it's dangerously easy to shrug off the very issues that need immediate addressing. Anyways, all rambling aside, some folks might find helpful stuff in here to help smooth out the wrinkles in their relationships. 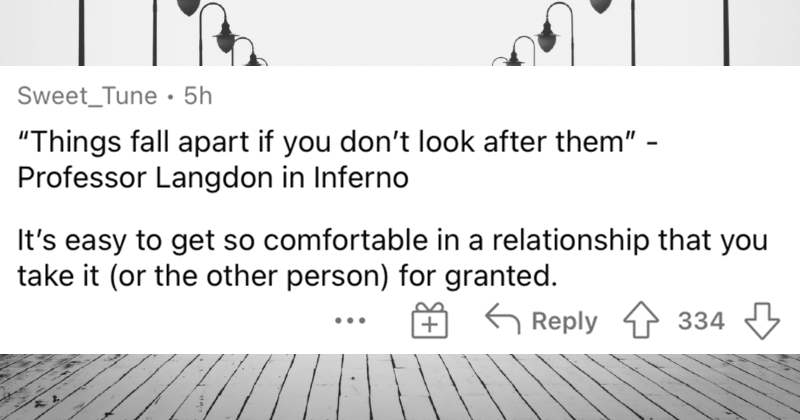 All aboard the feels trip express. This heartfelt and deeply moving story centers on a kid discovering his deceased dad's notebook. Sometimes life invites you to find some beauty through the pain. Such seems to be the case for this guy. 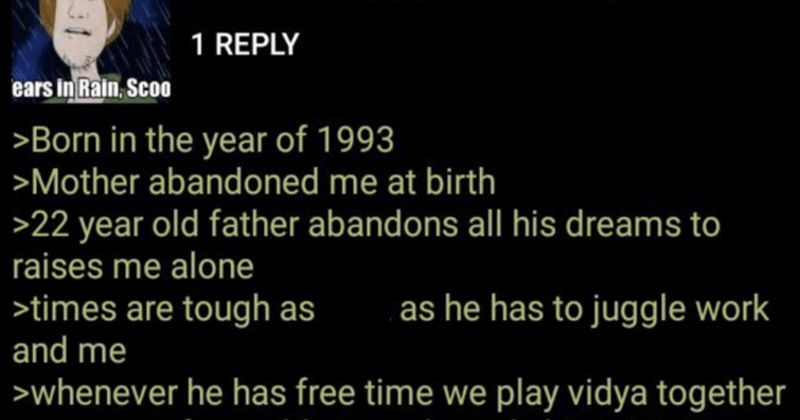 Someone on AskReddit asked for people that joined the military to share their regrets. These are pretty rough. 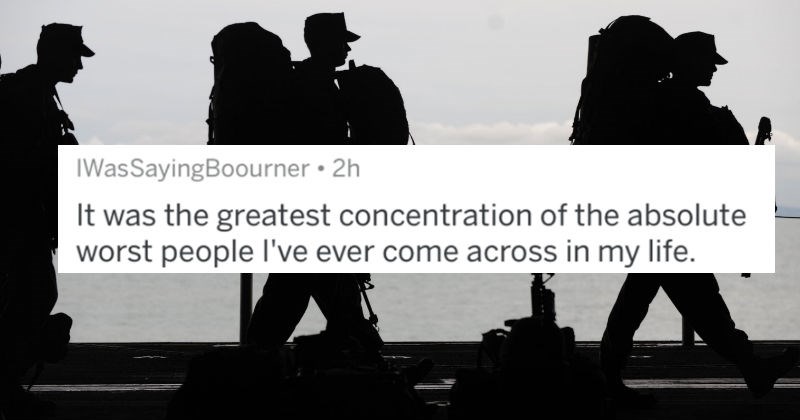 Breakup Texts That Ended Things In A Blaze Of Glory

Some people are more graceful with the breakup process than others. These relationships just didn't work out. And the texts are filled to the brim with pain and heartbreak. 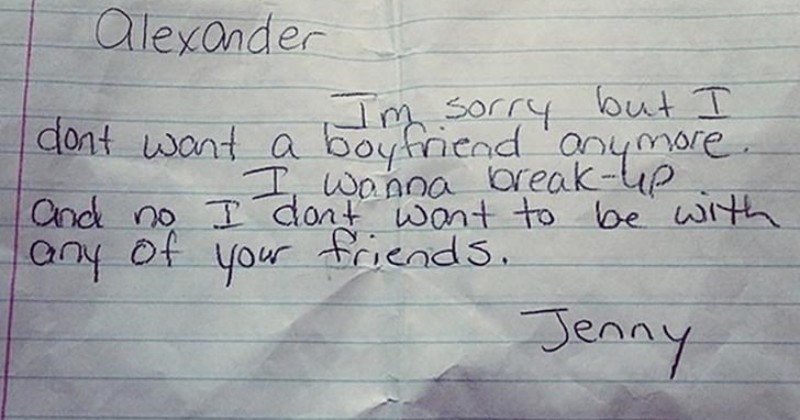 When Twitter user @annieedagrannie, found herself in the middle of crying in the bathroom, her little brother surprised her with a series of emotionally supportive and loving notes. Sometimes, your siblings just step up when you need it the most and aren't ready for it at all. 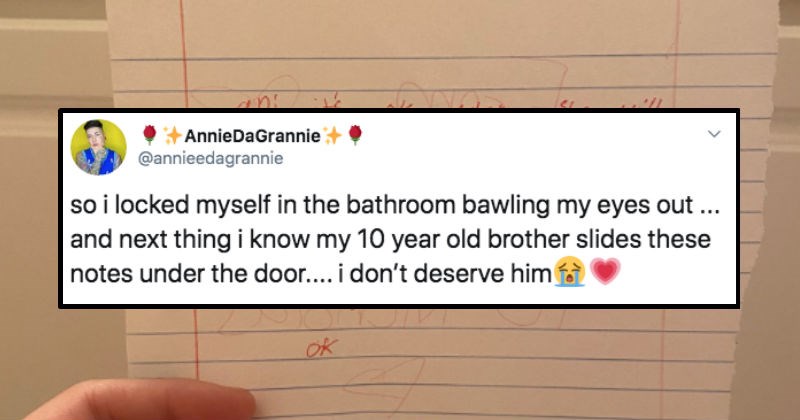 Liliana Segura's moving Twitter thread shines light on the struggles experienced by folks that try to set up prison visits to see loved ones. It's a bit of a nightmare, to say the least. 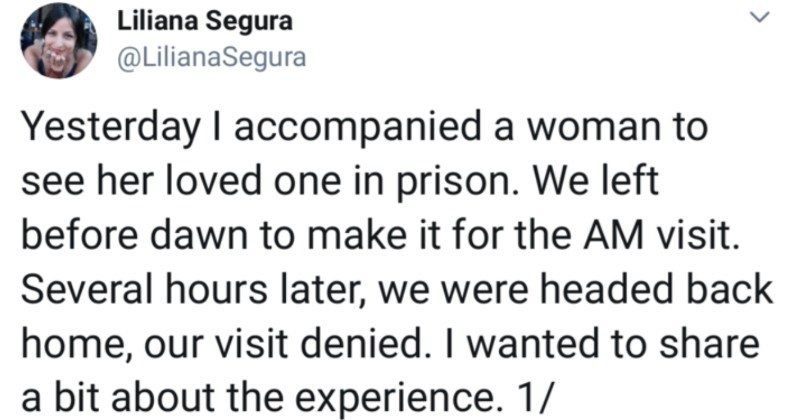 This guy thought he'd be able to run around and have a good time with whoever he fancied, and then just return home eventually to swoop up his ex girlfriend. My dude, that is not how the world works. People move on. Self respect is a thing. This guy got his reality check in the end, and it clearly stung. But hey, it's better to learn late than never at all. If he really valued her happiness above all else, he'd leave her be, and appreciate the fact that she was able to move on, and find someone that brought her happiness. 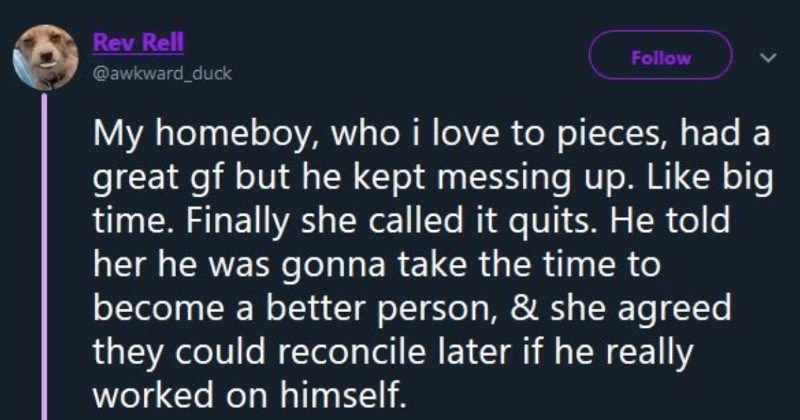 Sheila O'Malley's story about her friends taking a risk and intervening when she was too overwhelmed by grief to ask for the help she needed is a beautiful thing. Sometimes being a true and loving friend is stepping up for that person in your life who can't see what kind of hole they're in, and needs someone who cares enough to notice what's going, to step in and help get them out of it. This story's got all the feels. 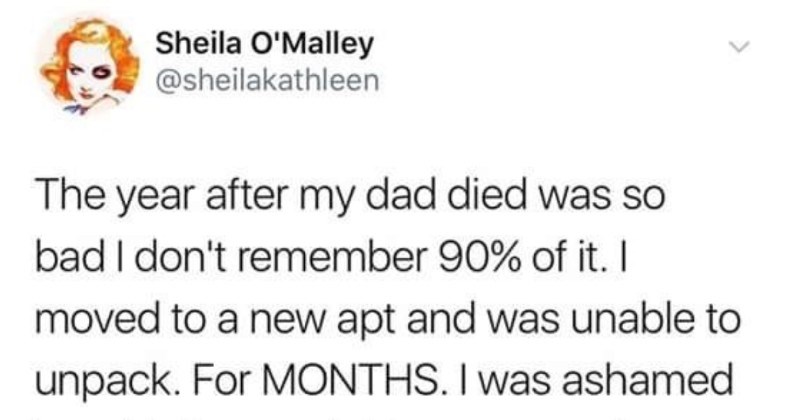 Careful, this post hits hard in the feelsplex. We get to hear some thoughts about life from a 24-year-old who was diagnosed with cancer, and too late for any good chance at survival. A definite big takeaway is don't sweat the small stuff. Make decisions from a place of courage, love, and positivity, and shape a beautiful life from there. 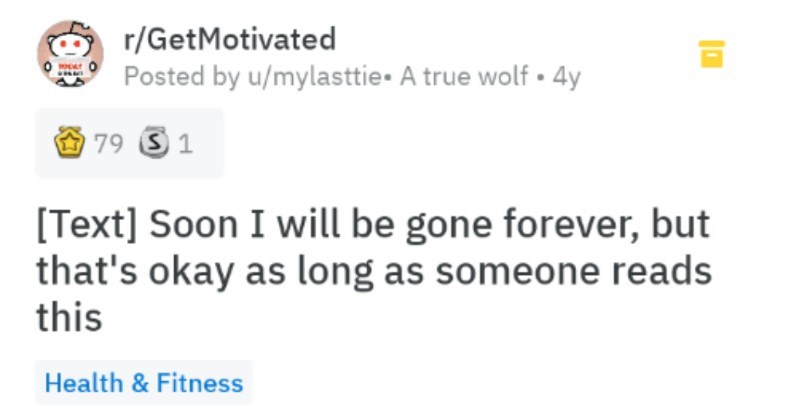 Tumblr Thread: Crying As Self Defense Against Karens And Kens

This quick Tumblr thread provides some potentially helpful advice on how to go about counteracting the toxic mess that can be a customer service interaction with a Karen or Ken. Tears, apparently are super effective. Takes a real mean, bitter, and senseless soul to continue badgering someone with insults and entitlement, while that person is crying. 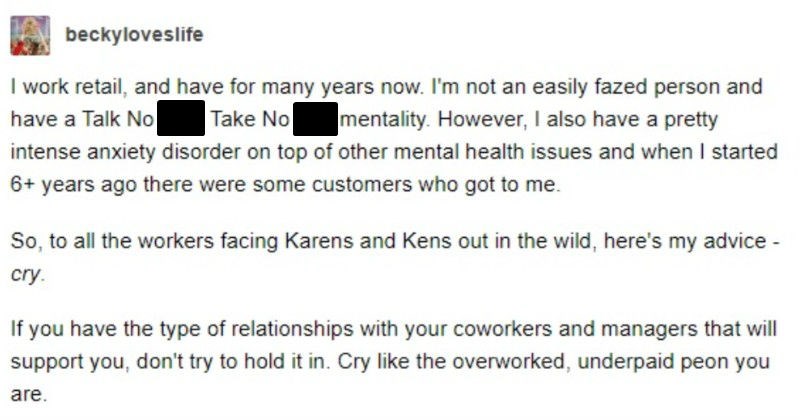 Andy Richter decided to call out a Twitter troll after their insensitive remark regarding depression. He handles the glaring display of ignorance in glorious fashion. Saying "cheer up" to someone living with depression is on par with telling a person who has asthma to "just breathe." 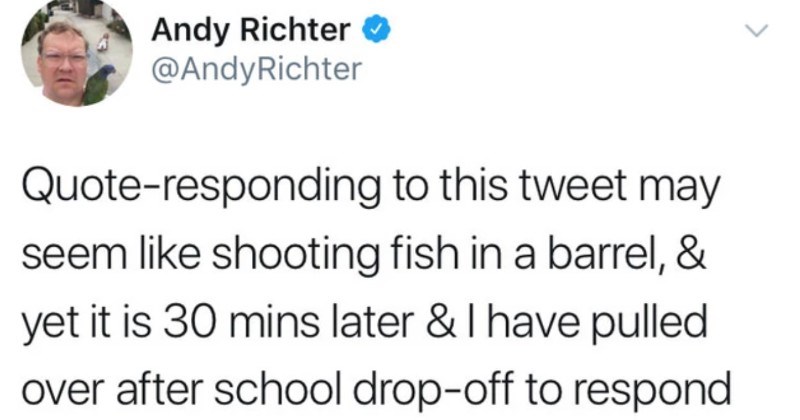 Brace yourself, this guy's story about discovering his dad's old notebook after he'd passed away is an emotional rollercoaster. Real or not, it's a beautiful and touching tale. 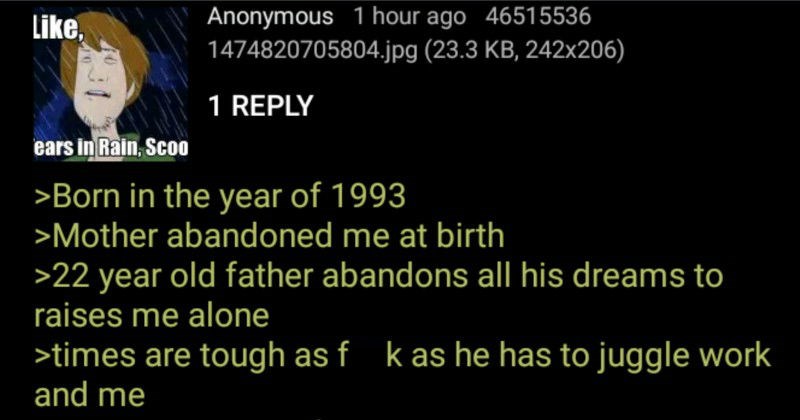 Woman Throws Boyfriend Surprise Party For Two, He Gets Upset

So, the story on this one goes that an (awesome) girlfriend planned a big "Nailed It" themed, surprised birthday party for her boyfriend. Apparently, upon receiving this kind and loving gesture, the dude proceeded to break down and dissolve into a puddle of tears, because he wanted other people around to remember him. Awesome girlfriend asked the folks of Reddit whether or not she was in the wrong, and I mean, based off what we know, how could she be? 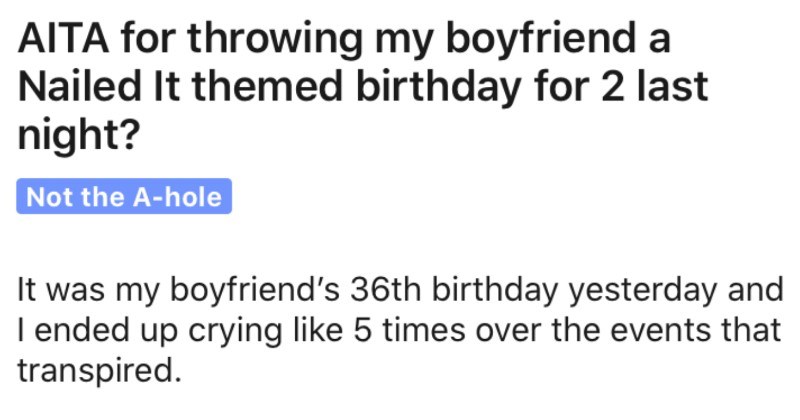 Things People Do When Stressed Out

Someone on AskReddit asked for people to describe the various things that they do when they're stressed out or annoyed. Whether it's stepping outside to grab some fresh air right before you shout a storm of curse words into the sky, or maybe something more chill, like diving into your favorite video game; we all have our preferred coping mechanism. 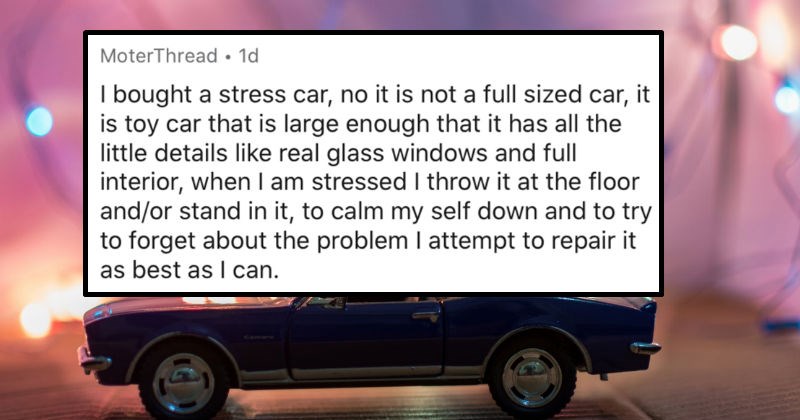 This guy found himself in the middle of an emotional rollercoaster of a date. It sounds like the date was emotionally reactive beyond comprehension, and generally resigned to being discontent with whatever the current situation was. The dude clearly had the moment he recognized that things had gone south, and decided to open up to the concierge, who was around and ready to listen. 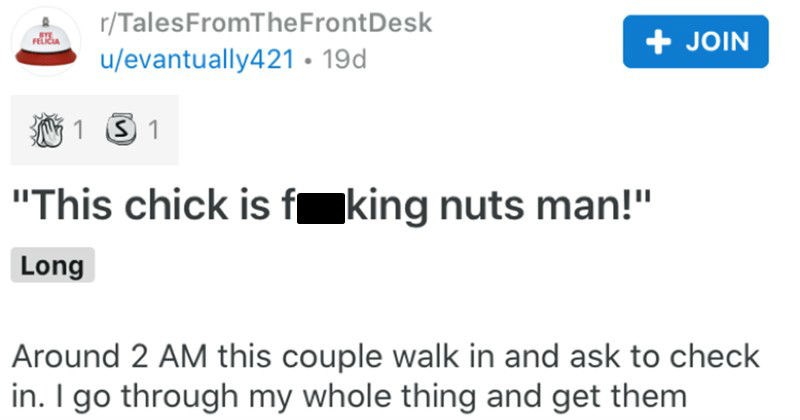 An Emotional Rollercoaster Of Breakup Stories

People are sharing their breakup stories on Twitter. The resulting tweets are filled to the brim with heartbreak, anger, confusion, and general unrest. Some of these people have got to be feeling like they're better off. 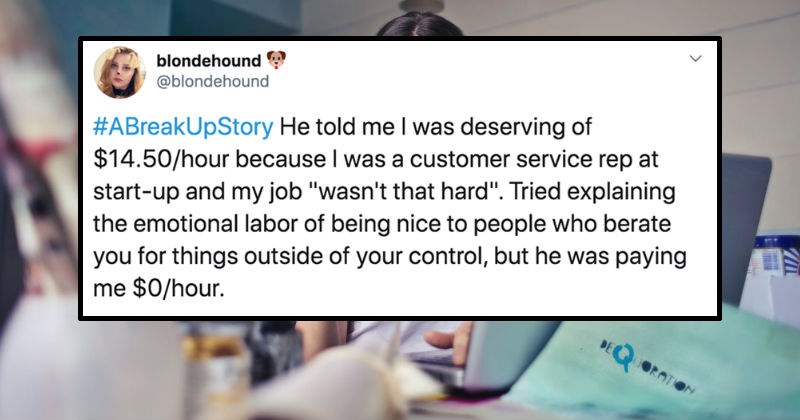