This brings us back to playing sports as kids, when the opposing team had the one kid who had already gone through puberty and all your teammates could do was just look at each other and go "well, good luck everyone." They're playing on an 8 foot rim too, so this kid doesn't even have to jump to dunk. Watching all the other kids try they're best is harrowing, but also kind of hilarious.

18 Classic Fails to Scratch That Itch

There's nothing like sitting back with some good old fashioned fail videos in all their Failure-tastic glory. We've got dunking gone awry. We've got dogs missing catches. We've got slips, flips, and loosened grips. If you're getting on the fail train we suggest some more good gifs right here. 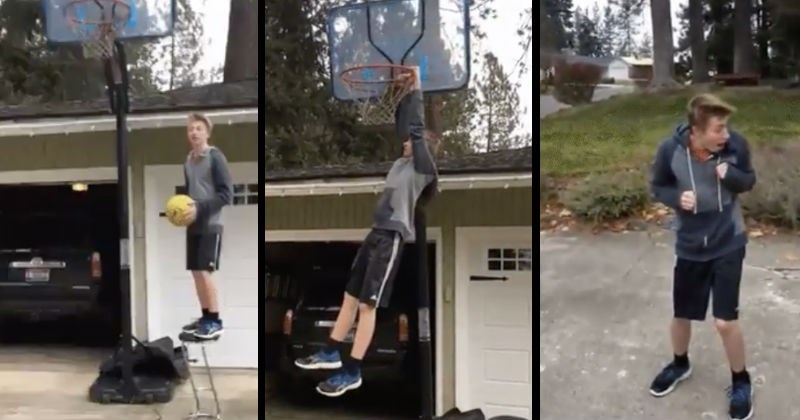 This Camper Is No Match for James Harden's Tricky Basketball Skills

Ok But Does Your Church Have a Dope Dunk Squad?

Maybe a recruiter will see this video and he'll have a new career in the tiny NBA.

Dunking Over a Convertible Is Harder Than It Looks

He Calls it the "Lost and Found" Dunk, and It's Totally Rad

A Blindfolded Dunk, How Could This Go Wrong?

Minnesota Timberwolves’ Zach LaVine won the NBA All-Star Sprite Slam Dunk competition on Saturday night in New York, and he won over the crowd with a throwback to the 1996 movie “Space Jam.”

In his first attempt, he appeared on the court wearing Michael Jordan’s #23 Tune Squad jersey from the film while the Quad City DJs performed the theme song.

“I’m still on cloud nine. I feel like I’m dreaming,” he said. “Seeing all the dunk contests and people hoisting the trophy, I just saw myself do it and lived it, so it’s a dream come true. I’m glad my family is here to witness it and go through it.”

LaVine, who got 2 perfect scores, is the second youngest winner in the competition’s history next to Kobe Bryant.

This Could Have Been an Epic Dunk, But That Wasn't in the Cards

Who Turned on the "No Gravity" Cheat?