In Memory of the Sexiest and Most Dead Sci-Fi Author

Beloved science fiction writer Ray Bradbury passed away today. Here's a song by someone who beloved Ray Bradbury a little too much. It's also extremely creepy if you don't know that this was made before he died (necrophilia: we don't endorse it here!).

Video also contains extremely strong language. If you're reading this, Grandma, please don't click the sideways triangle at the bottom left corner of the picture. It turns the picture into a movie about naughty things and you'll be so upset you might miss evening mass again.

R.I.P. Levon Helm of The Band

Levon Helm, drummer and backing singer for '70s rock band The Band, passed away earlier today. Originally the backing group for Bob Dylan and other musicians, The Band (as they started calling themselves) began releasing their own material and produced such classics as "The Weight" and "The Night They Drove Old Dixie Down." Their 1976 farewell concert served as the basis for Martin Scorsese's concert documentary The Last Waltz, and it (as well as the live album of the same name) is a goddamn classic. Look it up now if you haven't already.

(And on the same day Greg Ham of Men at Work died, too. Sad day!)

Beastie Boys MC Adam Yauch, a.k.a. MCA, has died. He was diagnosed with throat cancer in 2009 and had been undergoing treatment.

In addition to his work in the seminal, influential, absurdly successful, and undeniably excellent hip-hop group, he also ran his own film production company and co-founded a fund to support Tibetan independence. The Beastie Boys were inducted into the Rock and Roll Hall of Fame last month.

Australian musician and songwriter Greg Ham passed away in Melbourne on Thursday. He was best known for playing saxophone, flute, organ, piano and the synthesizer with the 1980s band Men at Work. You can hear his flute riff in the band's 1982 single "Down Under."

R.I.P. Davy Jones of the Monkees

The lead singer of '60s band The Monkees died of a heart attack in Florida this afternoon. He was 66.

Donna Summer Is Deader Than Disco

Oh god, is it too soon for "disco is dead" jokes? We on the internet don't have a filter for that kind of thing. Regardless, the 5-time Grammy winner and Queen of Disco, Donna Summer, passed away this morning at the age of 63 following a battle with cancer. She was known for such hits as "Last Dance", "Hot Stuff", "She Works Hard for the Money," and "I Feel Love." 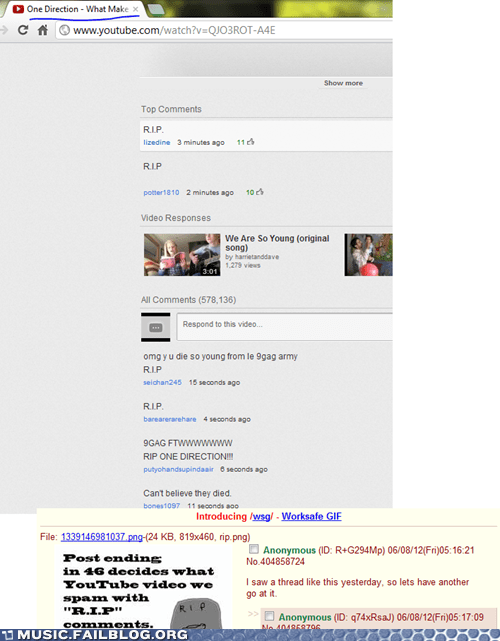 Eduard Khil, or "Mr. Trololo" as he was known to millions on the internet, died today of complications following a stroke. He was 77.

Khil enjoyed popularity as a singer in Soviet Russia during the '60s and '70s before stepping down from the public stage in the early '90s. Then, in 2010, Khil achieved the dubious honor of Internet fame after a video of a 1976 televised performance went viral.

Khin replaced the lyrics of the song, titled "I Am Glad, 'Cause I'm Finally Returning Back Home," with alternating "lololols" and "lalalalas" because he was afraid the Soviet government would censor the original lyrics. Which proves that in Soviet Russia, memes make you.

Gibbs died today at the age of 62 after a battle with cancer. With the death of Donna Summer just a few days ago, this is officially the worst week for disco ever. 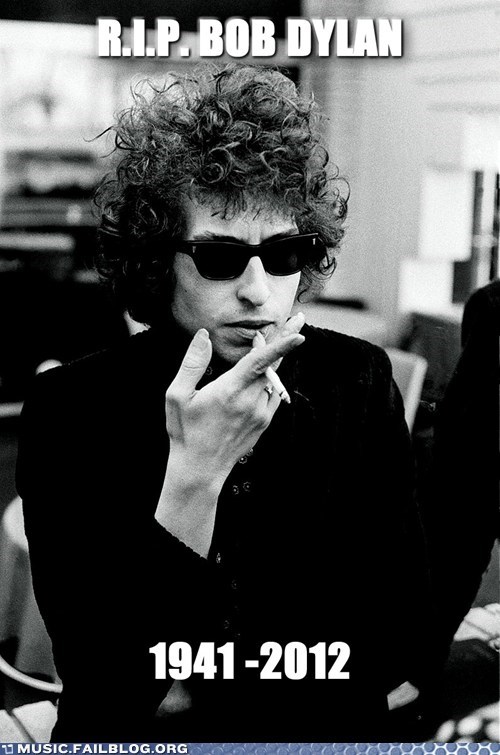 This posting of Bob Dylan's death was a HOAX
The legendary singer-songwriter was found dead yesterday outside his hotel room in Oaxaca, Mexico. He was 71.
So Is Bob Dylan Dead? NO, this was a hoax. He was alive when this was made, and he has won a Noble prize for literature since then, so nope, not dead. 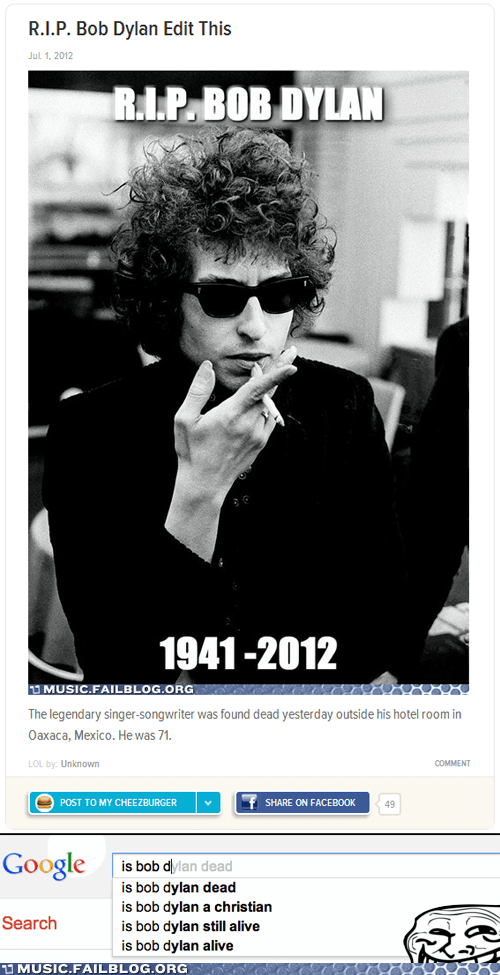 Where were YOU when Bob Dylan died?