First Selfies, Now This: the Sign Language "Interpreter" at Mandela's Memorial Just Made Everything Up

As if the president's selfies weren't enough, it became very apparent to those in the international sign language community that this interpreter here was basically just making things up on the fly and foregoing that whole "interpreting" (or "making sense") thing entirely.

Fail of the Day: Hockey Player Thinks Nelson Mandela was a Famous Athlete

The mistake being that he didn't know who Nelson Mandela was.

"He's one of the most known athletes in the world. A lot of impact in any kind of sport that he did, and even playing hockey, everyone knows him, right? From being the type of person that he was off the ice and on the ice. It's unfortunate that he passed a year ago, but, he changed a lot while he was with us, and he's a tremendous guy."

Here Bernier, let me Google that for you. Of course, that might have helped to know beforehand to avoid the embarrassment.

Bernier apologized soon after the event.

"I'm embarrassed," said Bernier. "I didn't mean to offend him, his legacy. I got flustered with the red carpet and I was nervous. I think everyone makes mistakes and that was me that night."


Comments
Advertisement
The Daily What
Favorite

It's amazing what this real sign language interpreter deciphers from the infamous faker at the Nelson Mandela memorial.

The Yankees Really Stood for Justice and Equality in Unjust Times 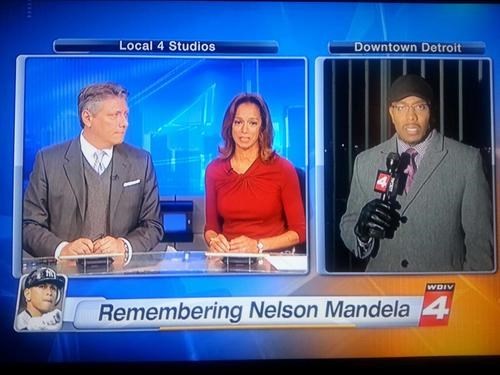