This Kangaroo is No Fan of Drones and the Surveillance State

A Never-Ending Loop of Disappointment

Via Check out our Vines here!
Repost
Recaption
Comments

Maybe We've Gone too Far With This Stun Drone

When Amateurs Get a Hold of Remote-Controlled Drones, Everything That Can Go Wrong Will

Warning: Some language in this video.

Rage of the Day: Drunk Shirtless Man Swats Down Drone

Via Lucky 7 Drones
Repost
Recaption
It’s not just animals who have a problem with our new obsession with drones and quadcopters.

Some drunk humans hate them too.

Last week a company based in California called Lucky 7 Drones was shooting instructional videos with a DJI Phantom 3 when a shirtless man walked over and quickly put an end to their production.

They were only flying it about 3-5 feet off the ground when he got irritated by it for some reason and swatted it out of the sky with his shirt like King Kong.

It flew into his leg before crashing down on the street, damaging the device.

It’s valued at $1350, and the company ended up filing a police report and writing about the incidenton their blog.

In California, vandalism of someone elses property over $900 is considered a FELONY! So the officers went to visit this gentleman and explained to him politely (which he did not respond to well) that they had the ability to arrest him on the spot for Felony Vandalism and that the local D.A. does prosecute those charges. They suggested he sober up and tomorrow (which would be today) he pay the necessary restitution to replace this item to avoid the criminal charges. As of Thursday afternoon, we have not heard from the gentleman.

That's $3000 Worth of Drone Meeting a Garage Door

Flying a Drone Over LA's Skid Row, Probably Not the Best Idea

Skier Marcel Hirscher had some luck and great timing with that close-call.

Bulldog Snatches a Drone Right out of the Air

Watch where you fly that thing!

If a drone headbutts you, pretty sure you get to keep that drone and GoPro.

TGIFridays Put "Mistletoe Drones" in Some of Their Restaurants to Encourage Customer on Customer Smooching. Bad Call. 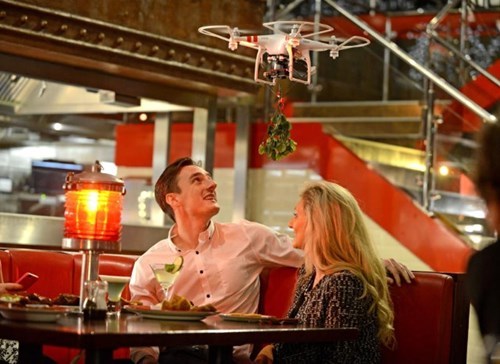 From the Daily Mail:

It was supposed to provide the perfect festive romantic moment: a mistletoe drone that would get diners at TGI Friday's to kiss on camera.

But the restaurant's plan to lure in festive diners went horribly wrong after one of the machines smashed into a photographer's face at a launch event in New York.

Georgine Benvenuto was left in shock after the machine flew into her face, slicing off the tip of her nose and cutting open a section of her lip.

The ten-inch drone became so entangled in Miss Benvenuto's hair that she even feared she would lose an eye.

Forget the GoPro and Mount a Handgun to Your Drone Instead

Wild Drones Are Now an Occupational Hazard for Rappers

For the record, reports say he was fine even though he got hit on the head by a drone. The show even continued normally.

What Yoga Position Involves a Drone Falling from the Sky?

One Angry Ram is Not Pleased with a Copter Visit