Via Lilly Mariela
Repost
Recaption
Comments
The Daily What
Favorite

A High Speed Chase Through Los Angeles Ended in a Selfie 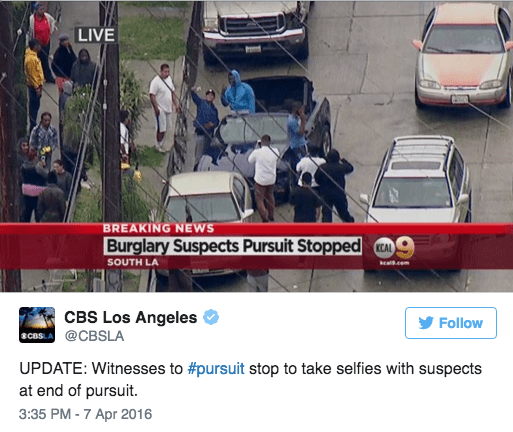 People in LA couldn't stop watching an insane car chase where suspects in a burglary led police through the city.

Eventually, the suspects gave up and surrendered to police but not before snapping a few selfies. Onlookers formed a crowd where they stopped to talk to friends and wait for police to catch up and some of them just had to take a picture or two.

Only in Montana: Chased Down by an Elk

Forget the Police, an Angry Civilian Ends This Car Chase

Forget the cops, the woman who got rear-ended in this ridiculous police chase knows how to take things down.

Kids These Days, Taking Selfies and Popping Wheelies While Getting Chased by the Police

If You Want a Selfie with a Squirrel, Make Sure It's Not Nuts About You After