Male Orgasm vs Female Orgasm... Which Is Better?

Dating Dispatches: A Thing Of Myth And Legend 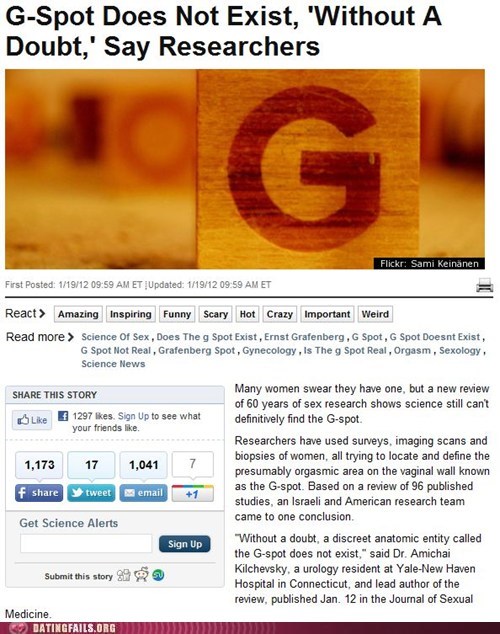 After some 60 years of sex research, science-type people are unable to definitively locate a "G-spot." (did you know it's named after a dead German gynecologist? think about THAT during your next sexy times) They're not saying that any and all stimulation is all mental or faked though (except for your girlfriend, OHHHH BURRRRRN). Rather, pleasurable sensation comes from several different structures converging, and there's not a special, particular erogenous gland tucked away in there. I'm sure the test subjects were very happy to assist with studying orgasms.

I Always Thought That Was a Figure of Speech 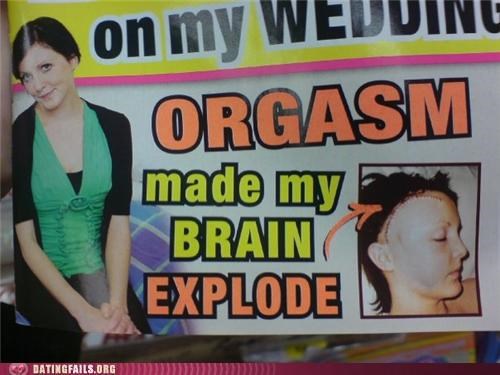 Remember, kids: if you have any form of orgasm before marriage, this will happen 99% of the time.

In Some Ways, Guys Are Pretty Low-Maintenance 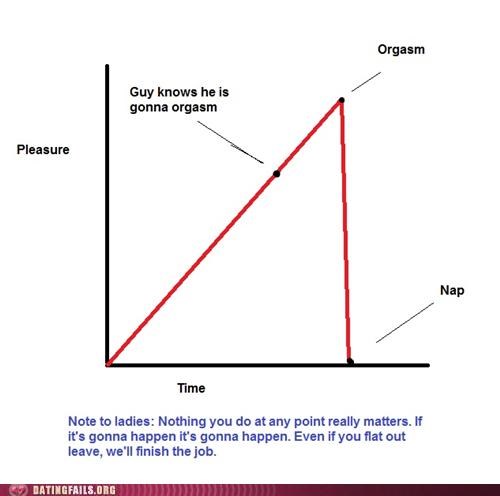 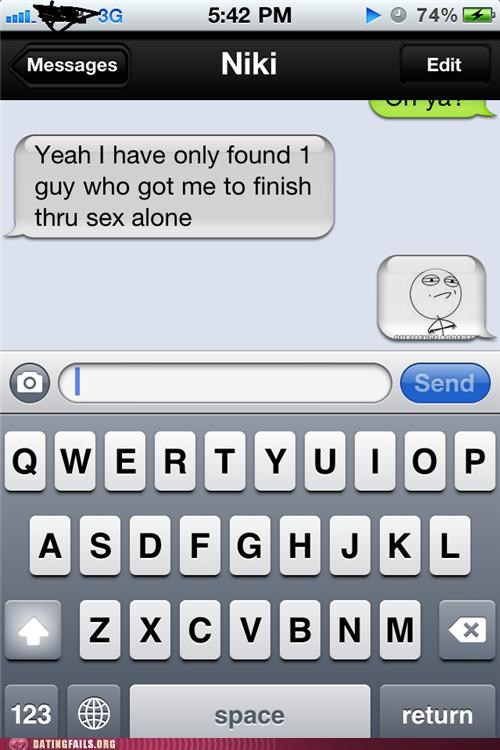 "Through sex alone?" What did the other guys have to do? Feed her nachos and ice cream? And was that "sex alone" or "sexting alone?"

Try Telling Her That Next Time, I'm Sure It'll Convince Her 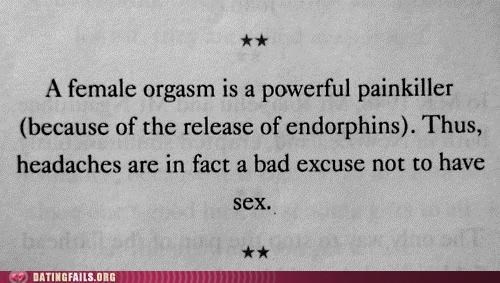 A good excuse not to have sex: being a smartass.

Hint: One of These Takes Quite a Bit of Skill 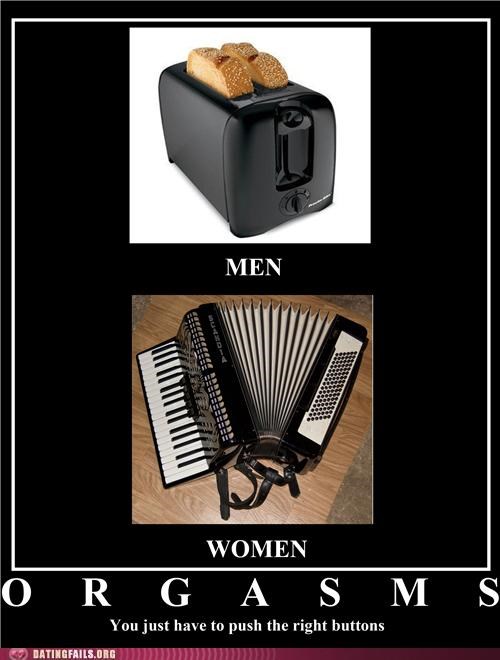 But if she makes a sound like an accordion, you're probably doing it wrong.

That's Why Sex Is Such a Headache

That's certainly a better excuse than the one we mentioned last time. 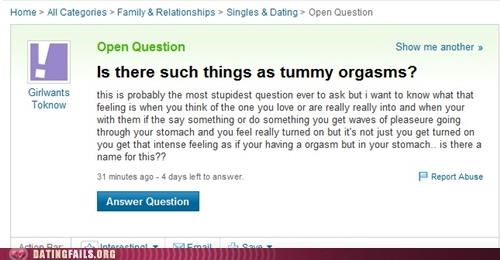 The "O" Face and the "Squiggly Line" Face 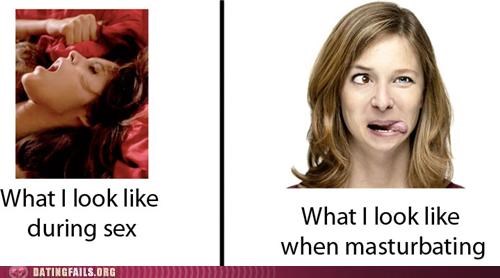 My Spider-Sense Tingled So Hard 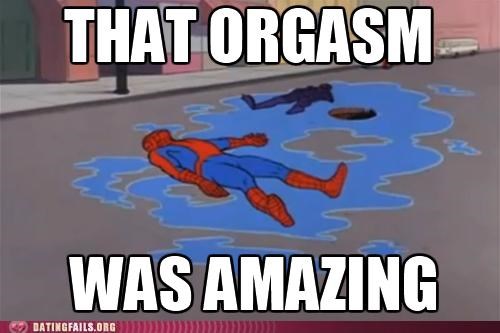 You're Going to Need a Bigger Chalkboard 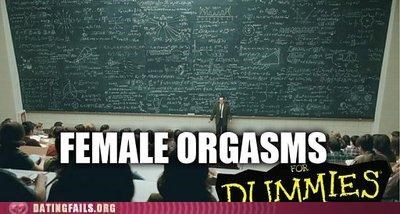 Behold, the Faces of Real People Experiencing Orgasms in Slow-Motion

AKA the vinegar strokes 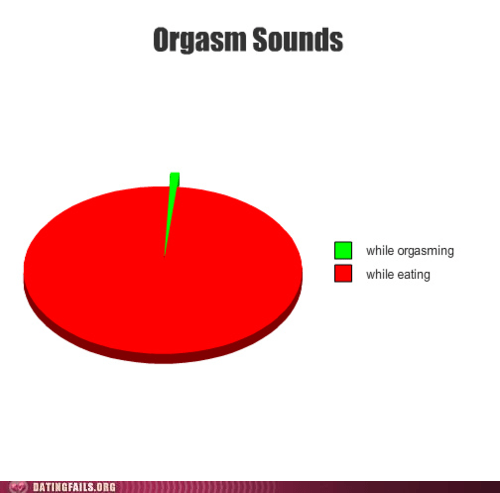 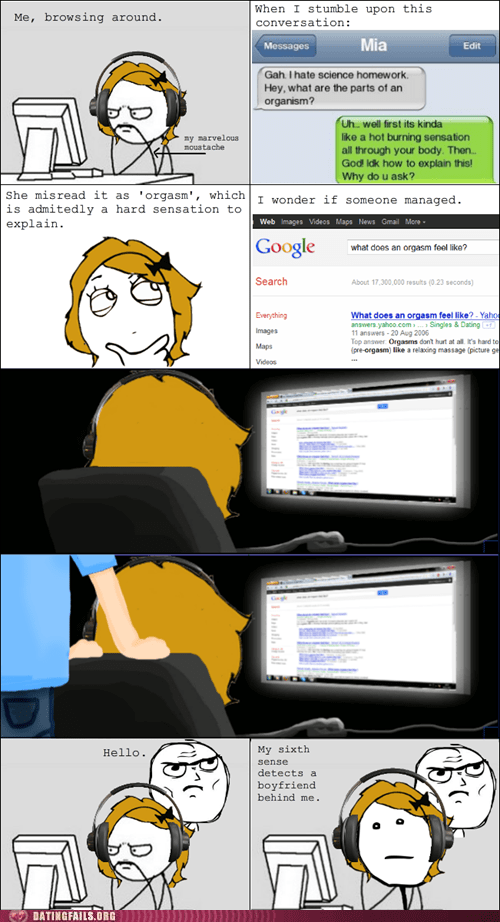 Via www.reddit.com
Repost
Recaption
Comments
The Daily What
Favorite

2015's been crowned the year of the female orgasm.

Household celebrities like Amy Schumer and Nicki Minaj spoke out with strong advocation, and outright demand for women worldwide to receive the sexual satisfaction they're deserved.

There's more wood to chop though; Cosmopolitan shared a survey this year, which reveals only 57% of women achieve orgasms during sex with their partners. It's time to close the orgasm gap folks.

This new released website, OMGYES, serves as an online orgasm training program, and actually provides the aid of real women to show through many differing techniques, how they make themselves come.

The site arranges what appears as a vast vocabulary bank full of equally tantalizing techniques, in a practical version of taxonomy based on female pleasure. Knowledge is power folks.

OMGYES users can then pretty much practice till they're perfect via an interactive touchscreen, which broadcasts realtime feedback. So, essentially an orgasm coach in the palm of your hand. Technology's a beautiful thing, ain't it?

Sure, in a brighter, better world full of sunshine and rainbows, there'd be no such thing as blue balls, but nobody's perfect. Some of us definitely suck at bringing others to orgasm.