Think You Have a Bad Boss? 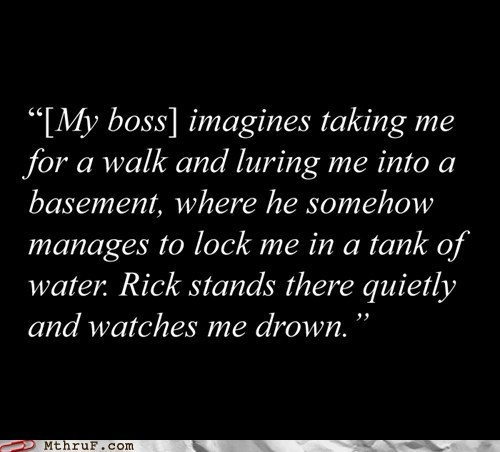 Via The Hairpin
Repost
Recaption

Has your boss fantasized about murdering you lately? If they haven't, then chances are they aren't as bad as Mike Dang's former boss, Rick.

In 2004, Dang worked as an administrative assistant at the admissions office of his alma mater, Columbia University. One day in the fall, Dang's boss, Rick, volunteered to man Dang's computer while Dang took a short break from work. When Dang returned to his computer, he found that Rick had closed all of his previously open browser windows. While going through his browser history to find his lost tabs, he came upon a site that Rick had visited on his computer: Rick's personal blog. What Dang found in the blog disturbed him quite deeply, to say the least.

Rick's blog contained detailed fantasies in which he imagined murdering Dang through a number of perverse and sadistic methods, many of which included Rick watching with delight while Dang drowned or choked. The fully disclosed details of the blog can be read here.

Want to know the kicker? Rick didn't get fired. The administration left it up to Dang to determine whether or not Rick would get fired. In what is perhaps the most saintly thing a human being could have possibly done, Dang allowed Rick to stay on board because he "needed the job." The rest of Rick's tenure at that particular job must have been, to put it bluntly, quite awkward.