He's Not Afraid to Give You a Hug, and You Shouldn't be Either

A 23-year-old woman in Sydney, Australia has won over the world after standing up to a hateful train passenger who was accusing a Muslim woman of being part of ISIS.

Stacey Eden overheard the passenger harassing her for about 10 minutes before deciding to intervene and film their conversation.

At one point the lady mocks the Muslim woman for wearing a hijab.

“Why do you wear it for a man that marries a six year-old girl?” she asks.

The Islamaphobic woman then brings up recent terror attacks and beheadings, to which Eden says “that’s not her doing it. That’s a minority of people.”

She posted the video of the confrontation to her Facebook page on Wednesday encouraging everyone to love on another regardless of religion.

“People like this make me sick,” she wrote in a Facebook post with the video. “People who are so ignorant and disrespectful to other people who were clearly sitting there minding their own business. ”

She’s received lots of support from people online about the incident, including the Muslim woman’s husband Hafeez Ahmed Bhatti who posted the video to his own page thanking her. 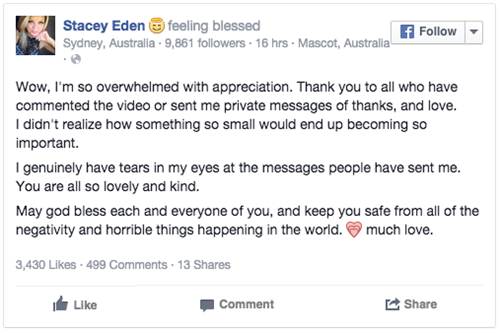