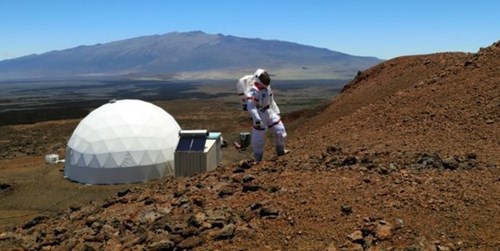 A group of researchers have been living in Hawaii as though they were actually living on Mars. And what did they do to keep themselves occupied? They cooked.

So what did the researchers -- and the people who suggested recipes for them to try out -- come up with? Lots of stuff involving Spam, for one thing, including a Cajun jambalaya and a dish that married the canned meat with curry and fried noodles. A chicken-spinach-enchilada soup, for another. Seafood chowder, for another. And borscht. Freeze-dried fruit, too, they found, was surprisingly similar in taste to fresh produce. As for comfort food -- crucial when it comes to the combating-food-boredom aspect of things -- a universal hit was ... Nutella. "It's something we craved," team commander Angelo Vermeulen told the AP. "We had a limited supply so we had to ration it."