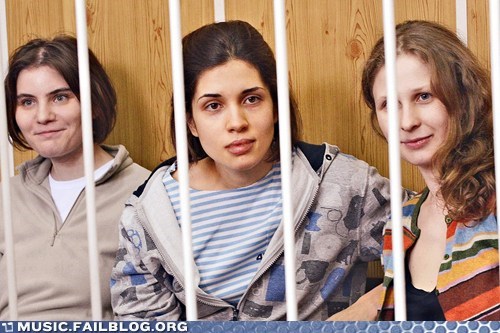 We haven't kept up with this story as it developed so here's a quick update: Last February, three members of the Russian punk band Pussy Riot entered Moscow's Christ the Saviour Cathedral and performed a "punk prayer" at the altar, blasting Vladimir Putin's re-election and accusing Russian church leaders of holding Putin more sacred than God. The performance lasted less than a minute and they left when authorities asked, causing no property damage to the church.

After a trial that earned them support from feminist activists and musicians internationally, including Madonna and Björk, the band members were charged with "hooliganism motivated by religious hatred" and sentenced to two years in prison. Their sentence might include time in a labor camp, where the threat of sexual abuse is pervasive.

Shortly after their sentencing, Pussy Riot released a new music video for their song "Putin Lights Up Fires, featuring footage from their cathedral performance and subsequent trial.

Dad Gets Revenge On Line Cutters In Best Way Possible