Prize in the Cereal Box FAIL 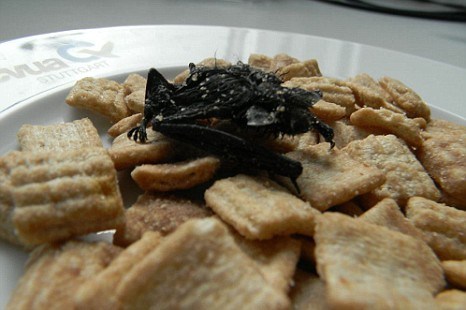 Yep. Tiny dead bat in your box of cereal. Don't see that every day, huh?

An Arizona Resident Got a 'Trump Stamp' Tattoo Y'all

A Country Phoenix radio show decided to ask the people of Arizona if there would be anyone willing to get a tattoo of Donald Trump in exchange for concert tickets. Not just any concert tickets though, a pair of 'Country Mega Tickets' to see every country music concert coming to Phoenix.
After 3 volunteers backed out, Travis proved he was ready and willing to get a 'Trump Stamp' for the tickets. Asked if he was a Trump supporter Travis answered, no but that he wasn't a Trump hater either. He went on to explain he's just a huge fan of country music and he's doing it simply to get access to see his favorite artists live.
Read the full story on 102.5 KNIX Country.

Umm Honey, How Many Quarters Do You Have?