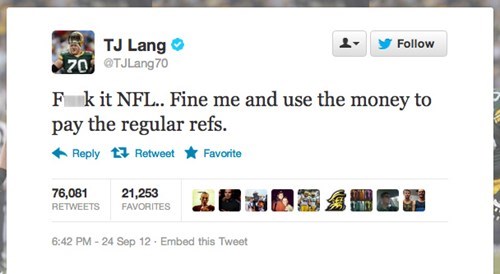 In the wake of last night's controversial touchdown call to give the Seattle Seahawks the win over the Green Bay Packers, many Packers players took to Twitter to voice their frustration. The most retweeted of all those players was TJ Lang, who offered up this jab at the NFL powers that be. I think it's safe to say we all want to see Ed Hochuli and his crazy muscles on the field again, and soon.

Friend Has Temper Tantrum Over Ride Being Lyft Not Uber