Chipotle Faked Its Own Twitter Hack on July 21st 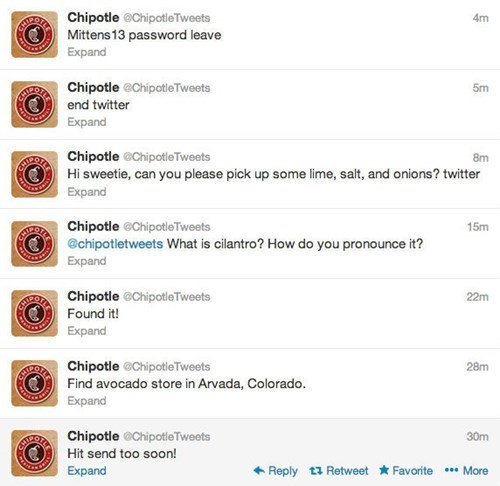 So basically, some loser in marketing making seven figures a year decided it would be a good idea to fake a felony to drum up attention to their social media presence. Chipotle representative Chris Arnold had this to say about the incident:

"Chipotle appeared to be the latest brand to have its Twitter account hacked on Sunday when its main account, @ChipotleTweets, posted a series of confusing and seemingly random tweets over the course of an hour. Now, the company has come forward and admitted that it faked having its account hacked as part of a publicity stunt tied to its 20th anniversary promotional campaign. 'We thought that people would pay attention, that it would cut through people's attention and make them talk, and it did that.'" [via Mashable]

The fake tweets were retweeted 12,000 times, and the Twitter account ended up getting 4,000 new subscribers that day compared to their usual daily subscription rate of about 250.

I think we all know how Chipotle can atone for this, though. Cough free guacamole cough.