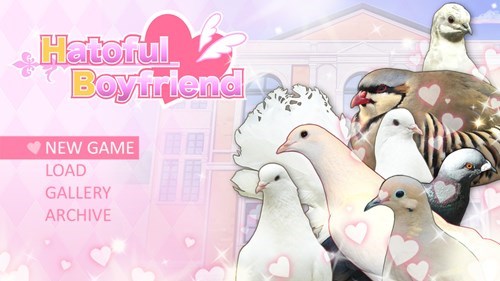 From the game description:

Congratulations! You've been accepted as the only human student at the prestigious St. PigeoNation's Institute, a school for talented birds! Roam the halls and find love in between classes as a sophomore student at the world's greatest pigeon high school.

Find The Pigeon Of Your Dreams

Because we can't make this stuff up: introducing Hatoful Boyfriend, a Japanese dating sim where you're a human girl at a high school populated entirely by pigeons, and one pudgie who acts as the school doctor. In the game, you meet and interact with the student body, and select one (or more) to pursue romantically.

Once more for emphasis: you are a human girl at a high school for pigeons and the game is to seduce said pigeons.

Twists and turns abound at St. PigeoNation's Institute (the school), including one character who's secretly a ghost, one who will murder you and put your head in a box if you're not careful, and a secret Board of Shadowy [Pigeon] Figures that rules the world. Check after the jump for a gameplay video.

A Bounty of Funny Tweets to Heap onto that Day